ALISON BOSHOFF: Lucy Boynton is set for her glossiest role yet as the queen of Vanity Fair Tina Brown

Gorgeous British actress Lucy Boynton has the world at her feet after her performances in the smash hit film Bohemian Rhapsody and the TV revival of The Ipcress File.

And I can reveal that she is now being sought to play British magazine legend Tina Brown in a high-profile TV adaptation of her 2017 book The Vanity Fair Diaries. The book centres on the media culture of New York in the 1980s and Brown’s eight years as editor in chief of Vanity Fair

Having arrived as a 20-something Brit abroad, Brown survived backstabbing rivalries and bitchy fall-outs, as well as dramas including the famous cover of the magazine featuring Demi Moore naked and pregnant. 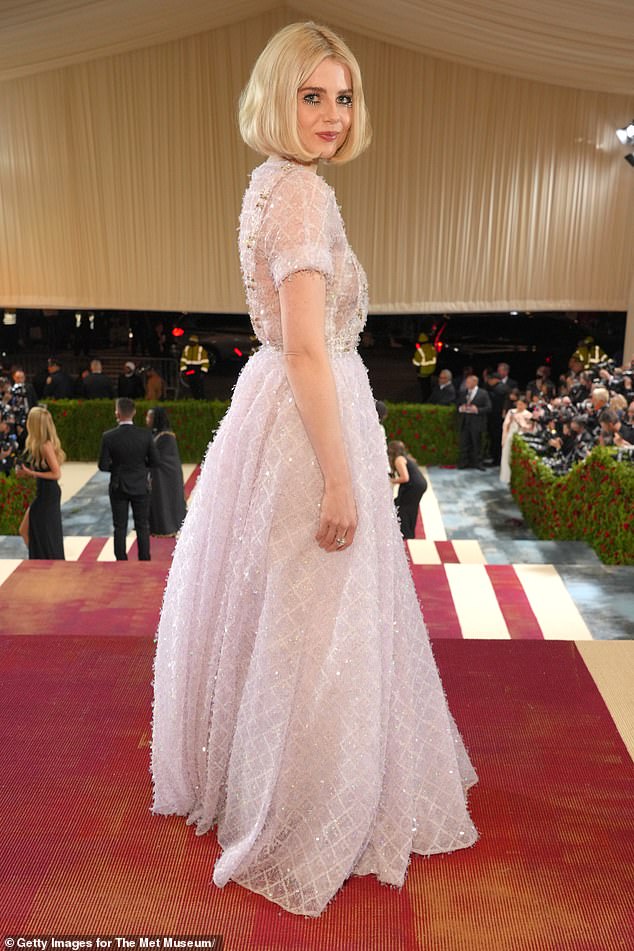 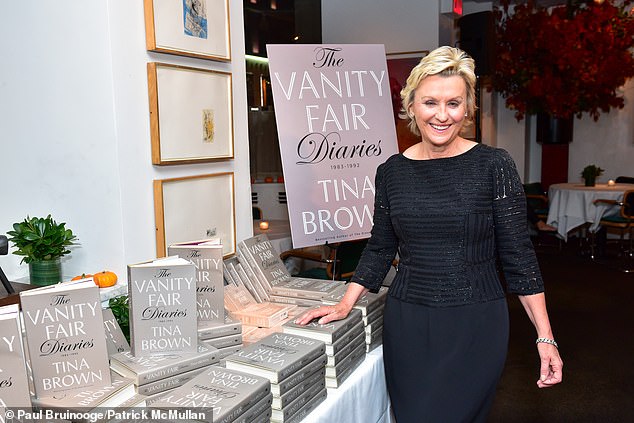 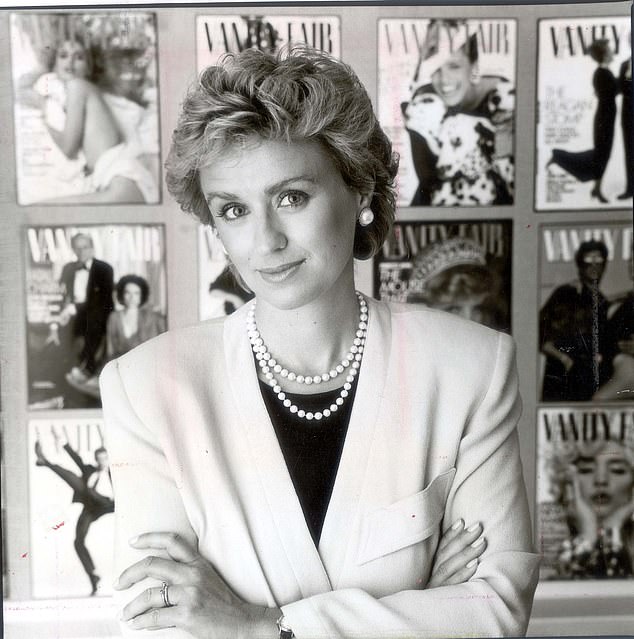 Brown, 68, pictured in 1988, has personally requested that Boynton be hired to play her, and there is an intriguing family connection, too. Boynton’s father, Graham, wrote for Vanity Fair and was editor of Conde Nast Traveller, having been recruited by Brown’s late husband Harold Evans

Brown, 68, has personally requested that Boynton be hired to play her, and there is an intriguing family connection, too. Boynton’s father, Graham, wrote for Vanity Fair and was editor of Conde Nast Traveller, having been recruited by Brown’s late husband Harold Evans.

More from Alison Boshoff for the Daily Mail…

A source says: ‘Lucy grew up in the Conde Nast family, so it seems like a wonderful coincidence that she is going to take on this role. Lucy is keen to do it, and the details are just being ironed out.’

The Vanity Fair Diaries were optioned in 2017 by Bruna Papandrea, the executive who produced the big budget TV adaptation of Big Little Lies.

She commented: ‘Tina’s singular voice immediately swept me up into the intoxicating, pulse-pounding energy of New York media culture in the Eighties — the glittering social landscape, the thrill of creative rebirth and the relentless quest for success.’ She went on: ‘Her diaries form a riveting, at times prophetic portrait of the opulent decade that shaped our modern media, told through the eyes of a woman who entered this world as an outsider but nevertheless smashed through professional barriers left and right.

‘I am overjoyed to be working with Tina and can’t wait to translate her legacy to the screen.’

Meanwhile, Boynton, 28, is getting ready to film Faithfull, about singer-songwriter Marianne Faithfull, and has met with the artist in preparation for the picture, which will be a riposte to the characterisations of her as merely Mick Jagger’s girlfriend.

‘So often the woman loses her identity and becomes an accessory to the man,’ she told an interviewer. For this reason, and because she wants audiences to believe in characters she plays, she keeps her personal life quiet, but she is actually dating her Bohemian Rhapsody co-star Rami Malek.

Boynton has recently finished work on a gothic horror film, The Pale Blue Eye, for Netflix, in which she stars alongside Christian Bale and Harry Melling.

It’s perhaps the ultimate A-lister’s dilemma: what do you do when you simply cannot decide which pair of dazzling diamond earrings you’d like to borrow?

The late Liz Taylor, whose taste for bling was legendary, had an ingenious solution.

Caroline Scheufele, the co-president and artistic director of the Cannes Film Festival’s long-time sponsors Chopard, said: ‘It was impossible for her to choose between two gorgeous Chopard pairs of earrings; so she requested we find a way to combine them.

‘We managed to find some ingenious way to link them together and she stepped out adorned with both pairs.’ 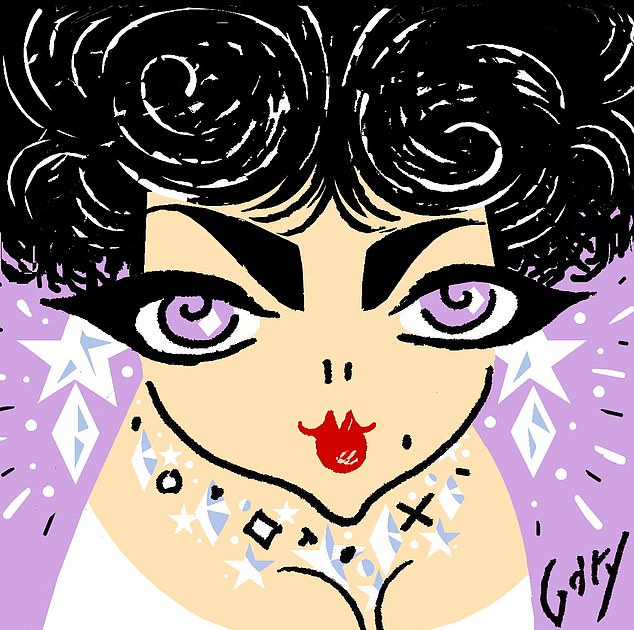 The late Liz Taylor, whose taste for bling was legendary, had an ingenious solution

However, I’m told that she has seen, and approved of, a major new documentary about their marriage and their dazzling, glamorous life together.

‘I have to tell you she’s thrilled,’ the documentary’s producer Emily Wachtel tells me. ‘I have shown her extracts and she likes it very much.’ Wachtel spent seven years making The Last Movie Stars, and was able to draw on many hours of home movies, and personal letters between Newman and Woodward, to take an intimate look at the couple. 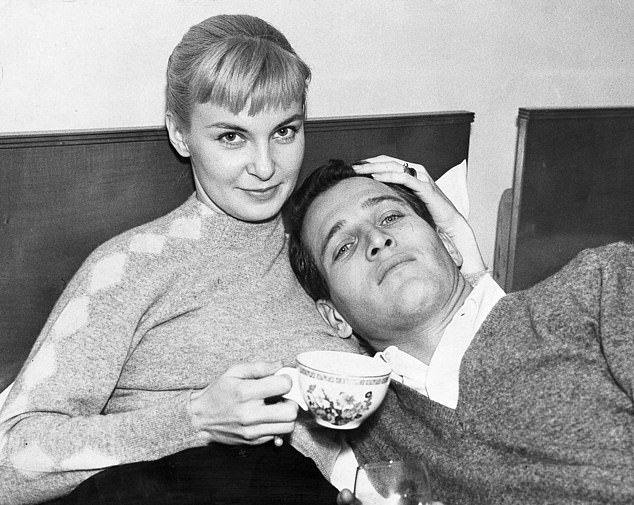 Their 50-year marriage weathered infidelity, alcohol abuse and the tragic early death of Newman’s estranged drug addicted son, Scott. Woodward, an accomplished actress and Oscar winner, was initially the more successful of the two, but was gradually eclipsed by her husband, and also constrained by the needs of their large family — with three daughters of their own and three children from his first marriage.

Crucially, Wachtel had the transcripts of audio tapes recorded by Newman when he was planning on writing his autobiography. In them, he reflects on his shortcomings as a father. ‘I taught ’em how to drive well. That’s probably the extent of my parenting.’

The charismatic star of Cool Hand Luke, The Sting and Butch Cassidy And The Sundance Kid, recounted his life story to a friend, with a view to releasing a book; but later changed his mind and destroyed the tapes. However the transcripts were found after his death in 2008, and in the film, actor George Clooney reads Newman’s part and Laura Linney speaks for Woodward, who also recorded her thoughts on those tapes. (Work is ongoing to turn the transcripts into a book this autumn.)

Woodward and Newman were Wachtel’s godparents, and her best friend is their youngest daughter Clea. They grew up together in Connecticut. She told me: ‘I have known Joanne Woodward for my whole life. When I was a kid, she would make me sweaters, she would send me postcards at summer camp — more than my own parents did even. She is my hero.’

She added that after Newman died of lung cancer, at 83, she began to try to raise money to make a film about his wife, who had for a long time dwelt in her husband’s shadow.

‘It took some time to get all five girls [the daughters] signed off on it,’ she recalled. ‘But because they were married for 50 years, my idea of a film about Joanne morphed into a project about both of them, because you cannot do one without the other. After Paul died I was looking at footage with Clea. There was all this amazing home movie footage with house guests like Laurence Olivier and others and I thought: “My God, somebody has to do this.” So that’s how it started.’

Actor Ethan Hawke, who directed The Last Movie Stars, showed parts of it at the Cannes Film Festival.

After being hobbled by the pandemic, the Cannes Film Festival has come roaring back with lots of big, buzzy films, such as Top Gun: Maverick and Elvis. But there’s always space for the bizarre, like the parody Smoking Causes Coughing, featuring five Power Ranger-style avengers — Benzene, Nicotine, Methanol, Mercury and Ammonia!

Cara’s career on the up as she scales the Shard

Supermodel Cara Delevingne is to continue with her acting career by playing a Greenpeace activist who scales the Shard in London in The Climb.

Based on the true life protest in 2013, the film will feature Delevingne as one of six protesters who climbed the building to protest against Shell’s plans to drill in the Arctic.

She will be joined by actress Hannah John Kamen and Hero Fiennes Tiffin, nephew of actors Ralph and Joe. Filming will start early next year, and effects technology will be used to pull off the stunts.

Delevingne has previously appeared in the film Paper Towns, and opposite Orlando Bloom in the TV series Carnival Row for Prime Video. 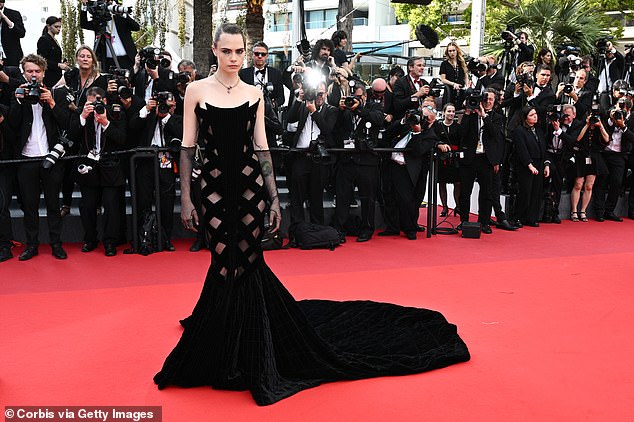 It’s been a few years (cough, OK, 20) since I last did Cannes and things have changed. Particularly the way a handful of so-called journos tried to get selfies and autographs. There were mob scenes this week among people desperate to get to both Idris Elba (who was amused) and Anne Hathaway (who looked alarmed).

Idris Elba’s genie makes a point with his ears

Idris Elba plays a genie or ‘djinn’ in a new film, Three Thousand Years Of Longing, and as this picture shows, he has the ears to prove it.

The actor came to Cannes, where the film had its premiere, and explained that he and director George Miller had been keen to ‘avoid any tropes of the djinn, down to how he looks’.

Which is why the djinn looks just like Idris Elba in a hotel bathrobe … with Spock’s ears.

Elba’s genie turns up in the hotel room of an academic, played by Tilda Swinton, after she buys a lamp, offering her three wishes. 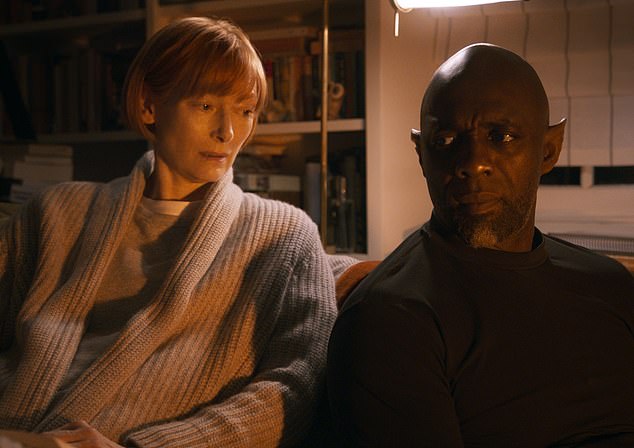 Elba’s genie turns up in the hotel room of an academic, played by Tilda Swinton, after she buys a lamp, offering her three wishes

It’s a thought-provoking, if deeply left-field drama, based on a short story by novelist A. S. Byatt, which in turn is based on the 1001 Nights fable.

Reviews are mixed. Variety’s Peter Debruge made me snort my coffee with a joke about the shock of seeing the djinn’s djenitalia.

Both lead actors are Marvel film veterans, with Idris having played Heimdall in the Thor pictures and Swinton The Ancient One in Avengers: Endgame and Dr Strange. And in Cannes, the pair agreed that the process is almost exactly the same, whether they are playing in a £300 million blockbuster or a £50 million arthouse movie.

‘From a performer’s perspective there is very little difference,’ Elba insisted. Swinton added: ‘As a performer, it doesn’t matter if it’s a big old battle or you are having a conversation in a towelling robe.’

She went on to joke that when Miller called her, she had been hoping for a blockbuster — like his last film Mad Max: Fury Road, or his next project, Mad Max: Furiosa.

And how about three wishes in real life? Well, along with wisdom and world peace, Idris wants an electric Ferrari and Tilda Swinton would like ‘a little bit more sleep’.

Is Mescal the Irish Brando?

There is a lot of love in Cannes for actor Paul Mescal, being dubbed ‘the Irish Brando’ by some excitable types. He made a global breakthrough playing Connor in TV’s Normal People and has been making the rounds of the parties in town while two of his films have been showing at the Festival: Aftersun and God’s Creatures.

In disturbing news for his fans, he is sporting a very bad moustache — though I’m told he’s grown it for a WWI role.

The critics (including my colleague Brian Viner) are most excited by Aftersun, in which Mescal plays Calum, a young divorced Scottish dad on holiday with his daughter. Writer and director Charlotte Wells took as her inspiration an old photo of herself taken by her father.

She said: ‘I am five or six years old, and sitting by the pool, and there is this beautiful woman, naked, behind me. And I saw it and thought: “Oh. was I the subject of this picture after all?”’

Fashion designer Pierre Cardin’s old house, the Palais Bulles — a crazy structure of interlinked spherical pods — is being rented by Instagram’s parent company Meta to give content creators a glamorous backdrop for their posts during the Film Festival. It’s costing around £10,000 per night (plus freebies for the influencers, of course). While filmmakers grumble about declining budgets, it seems it’s all right for some. Meanwhile, an alliance between the art-first cinephiles of the festival and executives at video hosting service TikTok, who are among the sponsors this year, has proved a bit rocky. French-Cambodian auteur Rithy Panh resigned from the jury for the TikTok short film prize amid claims that the social media platform was influencing the judging process. After reassurances, Panh returned to the jury and all concerned have done their best to gloss over the whoopsy.