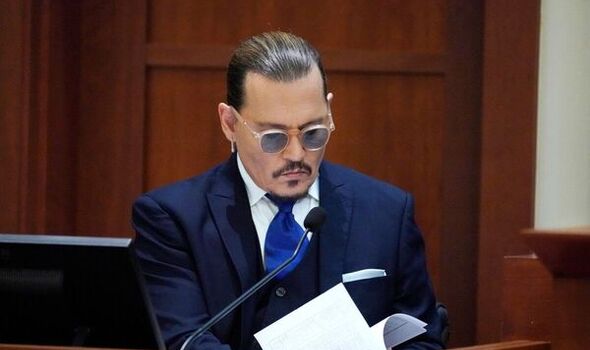 The actress allegedly hit her then-husband at their Los Angeles home in 2015 as a security guard tried to separate them.

Travis McGivern described the altercation in the couple’s defamation case in Fairfax, Virginia.

Depp’s bodyguard could not recall what started the row and said the couple gave “as good as they got” in the verbal exchange.

He told how when Heard left the penthouse Depp “rearranged” her wardrobe, ripping down every rack of clothes.

The actress returned and was “agitated” to find items strewn. When it became heated, Mr McGivern stepped between them.

He added: “Out of the corner of my eye, I see a fist and an arm come across my right shoulder, and I saw a closed fist contact Mr Depp in the left side of his face.”

The punch gave him a “shiner” and Mr McGivern, who said Heard also spat at Depp, insisted the star leave immediately.

He added: “I let him get hit by a Red Bull can. I let him get punched. My job is to ensure the safety and well-being of my clients. I felt I hadn’t done that.”

Depp’s agent Jack Whigham told how negotiations in 2018 were underway for movies and the actor was to be paid £18million just for the sixth Pirates role.

But a Washington Post article by Heard about domestic violence proved “catastrophic” and investors pulled away.

Between the publication of her piece and October 2020, Depp appeared in no movies while the year before he was paid about £25.2million for three films.

Depp is suing his ex-wife for £38million for defamation while she is counter-suing for £78million.