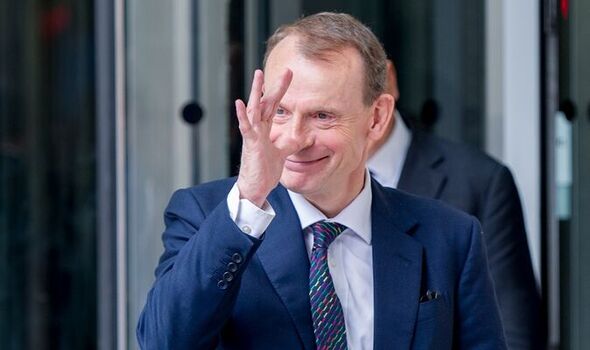 The broadcaster had “stupidly ignored” two mini-strokes then tackled a rowing machine target more suited to a young professional athlete. Andrew, 62, who began work for radio company Global earlier this year after 21 years at the BBC, said: “It was something like to row five miles in 40 minutes or whatever it might be. One of my physios later said, ‘That’s what a very fit professional athlete in their 20s should be heading for – you were mad’.

“I can remember very vividly hitting my target and immediately feeling very sick and dizzy, and seeing sort of flashing lights.

“I woke up the next morning lying on the floor. I was paralysed down the left side. I looked in the mirror and I had that sort of mouth that came right down at the side.”

Andrew, married to journalist Jackie Ashley, with whom he has a son Harry and two daughters Emily and Isabel, added: “I woke up Jackie and said ‘I think I’ve had a stroke’, and she screamed. I was taken to hospital and what follows, pretty grim, but they saved my life.”

After the operation, “I came round not feeling great, probably about a day later, and in that period my wife and kids had been taken into a room and told I wasn’t going to make it, and to prepare themselves that I was going to die.

“Some time afterwards, they were told ‘We think he might make it but if he does he’ll be in a wheelchair for the rest of his life and we don’t know how much cognition he’ll have’. And so when I woke up and I was myself they were pretty relieved.

“At the end of it all, the doctor said ‘Mr Marr, this bit hasn’t really worked, we haven’t been able to do what we wanted to do but we’ve got drugs that will work’.”

Andrew had months of tough physio and speech therapy after the 2013 stroke, and had to adapt his recording methods when he went back to fronting his BBC show.

“If there was a long sentence I couldn’t get the air at the end of it, so I had to start recording the tops of the show because I would run out of puff otherwise.

“David Cameron did me a huge favour. He agreed to be interviewed and was gracious enough to give me news lines and it was all very successful.”

Speaking on the Crisis What Crisis? podcast, he told Andy Coulson that family, whisky, music, painting, the sky and walking in nature are the things that now calm him down.