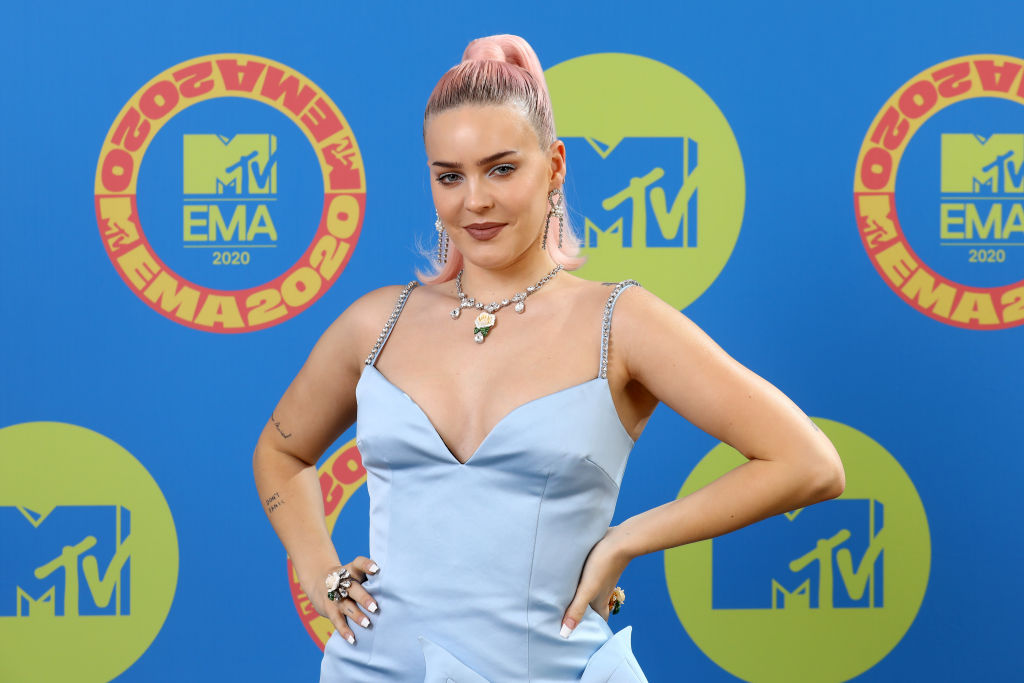 Anne-Marie says she felt like ‘an a***hole’ going into therapy despite her glitzy life as a pop star.

The 2002 singer sought help after building up a paranoia that people ‘hated’ her.

She became fearful simply leaving her house but the sessions worked wonders and even provided new fodder for her latest record, unsurprisingly called Therapy.

‘I almost felt like a bit of an a***hole saying to everyone, “You know what, I am not happy but I am living this life”,’ the Voice coach told Guilty Pleasures. ‘I felt like I should have been happy, so I kept it quiet for a while.’

Anne-Marie said the breakthrough came during lockdown, adding: ‘When 2020 happened, we were all inside and couldn’t do anything else but sit with ourselves. I thought, “I don’t want to keep this all to myself, I want to talk to someone”. I told my manager and she introduced me to a therapist. I had got to a point where I didn’t want to feel like that any more.’

The pink-haired star, 30, admits her worries ‘impact everything’, adding: ‘I always felt like everyone hated me. It’s a horrible feeling leaving the house expecting everyone to think that you’re an a***hole. The stress of that made everything really heightened.

‘So everyone I met, I was trying to be really nice and be myself and overly compensating for that and hoping they would go tell someone, “Oh, Anne-Marie is really nice”. I couldn’t bear the thought of someone having something bad to say about me which is quite a bad headspace to be in in this industry.

‘Sometimes people just don’t like your music. I’ve had to get over that a bit. Overcoming that sense of worry and living my life for me instead of for other people is the biggest thing I have come to learn. It’s a hard lesson but I’ve managed to do it.

‘It’s so much better because every decision I make is because I want to do it instead of it being about everyone else.’

Pic cap: In the pink: Anne-Marie says the sessions helped her cope with paranoia

Join Little Mix? That’s an uh-no from me

Anne-Marie also explained why she is not the one to replace Jesy Nelson in Little Mix… nor stand in as maternity cover for pregnant Perrie Edwards and Leigh-Anne Pinnock.

Little Mix fans have been badgering her to take a permanent spot in the group after they teamed up for new single Kiss My (Uh-Oh).

‘A lot of people have said that to me, and when we were doing the video shoot we looked at each other and went, “Ooh, we are all the same height”. It was really good… but no,’ said Anne-Marie. While filming the video, she was impressed by the stamina of the Little Mix mamas-to-be.

‘It is so amazing to work with them,’ she admitted. ‘Even where they are with their pregnancies, they are still working hard. It’s quite inspiring.’

Anne-Marie’s banger with the trio was a last-minute decision. She explained: ‘As I was doing the track listing I thought, “They would sound so good on this”. So I sent it to Leigh-Anne and luckily they loved it and made it ten times better.’

‘Freer’ Britney is finally able to shorts things out

You want a Piece Of Me? Britney Spears dropped her most daring Instagram post this year after going topless for her followers.

The 39-year-old liberated herself to her Free Britney supporters as she uploaded a photo wearing only a pair of denim shorts, covering her boobs with her hands.

Britney’s pal Paris Hilton responded by sending a heart, eyes and fire emoji while a fan posted: ‘She’s freeing herself.’

A source has claimed the singer now feels ‘free to speak her mind’ after being granted permission to drive again and hiring her own attorney, Mathew Rosengart, for her ongoing conservatorship battle.

A Kanye West fan is selling a ‘bag of air’ from the rapper’s album listening party last week.

Kanye, 44, hosted the preview of his new record Donda at Atlanta’s Mercedes-Benz Stadium.

Now one fan who attended claims to be selling a Ziplock bag full of oxygen from the event for $3,330 (£2,421) on eBay. The listing states: ‘Bag of Air from DONDA Drop LAST ONE OFFICIAL Kanye West — Mercedes-Benz Stadium.’

The seller, who has 100% positive feedback, also warns that returns are not accepted.

Meanwhile, it was revealed at the party that JAY-Z appears on Donda, his first collab with Ye since 2016.

Ed Sheeran felt his career was over once he had scored the most profitable music tour of all time… and became a dad.

The 30-year-old Bad Habits singer took a year off following the success of Divide and started ‘searching for who I was’.

Ed explained: ‘I stopped playing music for a bit. And music is entirely me as a person. Then I had my daughter and I was like, “Right, that’s it. This is me. I am probably just going to be a dad. I am not going to play music anymore”.’

But even though he put plenty of ‘time and effort’ into being a dad to daughter Lyla, he felt he needed more. ‘And then I was suddenly like, it is more important for my daughter to grow up knowing that her parents have a work ethic,’ he told SiriusXM.

‘I slowly got back into music that way and the creative process started flowing again.’

Henry Golding says he’s an outsider in Hollywood because either he is not ‘Asian enough’ or ‘white enough’.

The 34-year-old actor — who shot to fame in Crazy Rich Asians and has also starred in A Simple Favor, Last Christmas and Snake Eyes: G.I. Joe Origins — told Inverse.com: ‘I’m always the outsider. I feel like an outsider now. I wasn’t Asian enough for Crazy Rich Asians. I’m not white enough for Snake Eyes.’

And Golding said he relates to Chinese-Canadian actor Simu Liu, who faced opposition over his leading role in Marvel’s Shang-Chi. He said: ‘It’s bonkers we’re still having those conversations when we’re fighting for something so much bigger. It’s toxic. We should be uplifting each other.’

How to get your Metro newspaper fix

Metro newspaper is still available for you to pick up every weekday morning or you can download our app for all your favourite news, features, puzzles… and the exclusive evening edition!

How to get your Metro newspaper fix

Metro newspaper is still available for you to pick up every weekday morning or you can download our app for all your favourite news, features, puzzles… and the exclusive evening edition!