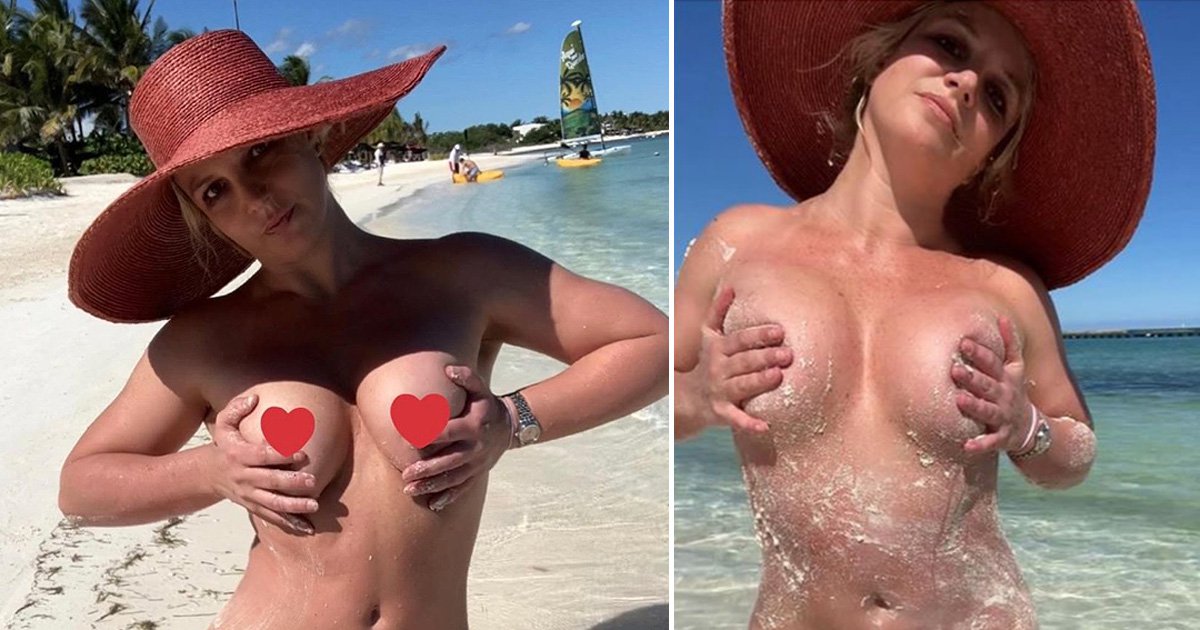 Britney Spears has become somewhat famous for her risqué snaps, and she’s back again with a series of nude pics.

The Toxic hitmaker, 40, has been embracing her freedom this year since her 13-year conservatorship ended last November, now travelling the world and spending time with husband Sam Asghari, 28.

Britney and Sam – who met during filming for her Slumber Party music video in 2016 – are soaking up the sun in topical climates once more, giving fans a glimpse inside their sunny getaway.

Making everyone green with envy, the pop queen shared a selection of snaps from a gorgeous beach, although, we doubt anyone was really admiring the golden sand or clear waters.

Britney posed confidently for a naked shoot on the beach, with just an oversized sun hat (and some SPF, hopefully) for protection.

Don’t worry, this is no Tommy Lee situation, as the star made sure to protect her modesty by covering her private parts with heart emoji.

Hey, at least she won’t get tan lines!

One snap shows Britney with her hands covering her chest while she kneels down in the sand, while another shows her laying down, throwing her head back and eyes closed, basking in the sunshine.

The photo series was without captions but we doubt any words were really needed.

Brit did share some other snaps amongst the nude ones too, including a short clip of her strutting around on the sand in a printed shirt and shorts, as well as a pic of her hat and sunglasses alongside a bottle fizz.

Of course, fans flocked to the comments section with plenty to say about the singer’s latest nude shots, especially as there looked to be people in the sea behind her in the background.

‘The people in the background will have a story to share for generations to come,’ one person wrote, noting that the fellow holidaymakers will have had a full view of Britney’s bare behind.

Other comments included: ‘Britney straight up trolling the haters at this point,’ referencing the followers who repeatedly ask Britney to stop sharing naked pics, and how she’s having the last laugh.

‘You better werk!’, wrote another, while one fan came through with the ultimate pun: ‘It’s Britney, beach.’

Although, others did question how the snaps were allowed on the social media platform, which is famously strict when it comes to explicit content.

Britney has every reason to be happy and carefree right now, as she recently returned to music with a collaboration with Sir Elton John.

Hold Me Closer marked the singer’s return to the music scene after six years away, and it went down a storm.

Released in August, the duet, which mixes Sir Elton’s 1971 hit Tiny Dancer with his 1992 song The One, while parts of Don’t Go Breaking My Heart from 1976 also feature in the hit track, shot up the streaming charts around the world.

The pair also dropped a music video for the tune, which fans have been obsessed with, despite the pop star not making an appearance.