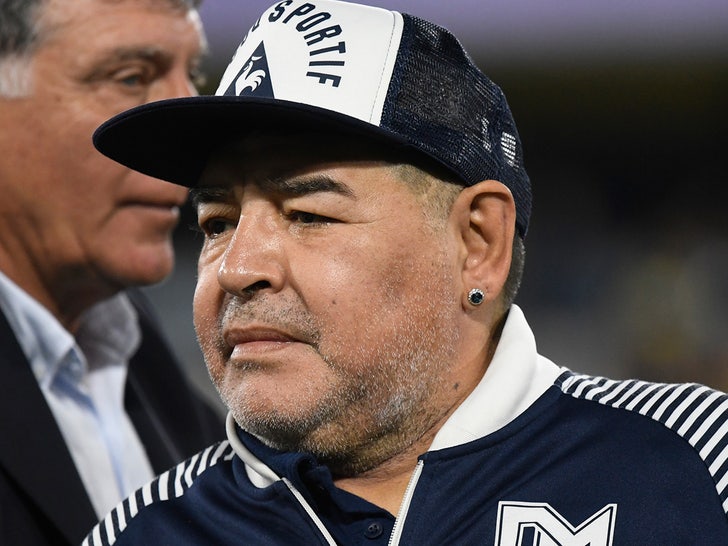 7:05 AM PT — 11/4 Positive news … the neurosurgeon who operated on Maradona’s brain has deemed the procedure a success — saying the soccer legend is now doing well in the early stages of recovery.

“I was able to evacuate the hematoma successfully and Diego tolerated the surgery very well,” Leopoldo Luque, the physician, said to media members.

According to Luque, Maradona’s procedure lasted roughly an hour and a half … with the doc adding, “The way he reacted after the surgery is promising.”

It’s unclear when Maradona will be able to leave the hospital … Luque told reporters that will all depend on how he responds in the coming hours and days.

1:31 PM PT — Fans in Argentina have taken to the streets in support of the soccer legend … cheering on his ambulance on the way to the surgery site … with seemingly hundreds of people crowding around the vehicle.

Some fans had posters, others hung signs … but it’s obvious Maradona is still considered a hero in Argentina, where his biggest backers are hoping for a speedy recovery.

Soccer legend Diego Maradona has been diagnosed with a blood clot on his brain and his doctors say they will perform emergency surgery ASAP.

The 60-year-old Argentinian star was hospitalized Monday in his home country because he wasn’t feeling well — complaining of dehydration and depression.

Doctors began running tests, including an MRI, which revealed a subdural hematoma — also known as a brain bleeds — usually caused by a traumatic head injury.

If not treated, the bleeding and added pressure on the brain from the hematoma can be fatal, according to WebMD.

Maradona’s doctor, Leopoldo Luque, will perform the surgery and seemed to be optimistic about Maradona’s chances, when he spoke with the media.

“This is a routine surgery that even [Cristina Fernandez de Kirchner, Vice President of Argentina] has undergone,” Luque said.

As for how Maradona suffered the injury, Dr. Luque believes it likely happened over the past month.

“We did an MRI one month ago and everything was normal. We repeated the study and we saw the subdural hematoma. These types of injuries are tough to spot, I don’t know if he suffered some kind of hit or fall.”

Dr. Luque says Maradona is “alert” and “not upset” — and has signed off on the surgery.

Back in the day, Maradona was considered one of the best soccer players in the world — leading Argentina to a World Cup in 1986.

After his playing career, he struggled with drug addiction, alcohol abuse and health issues — and has been hospitalized multiple times.