Punk. It’s a genre that invokes – depending on who you ask – images of safety-pinned leather jackets and power chords, shaved heads and suicidal stage dives, minute-long songs and middle fingers, radioactive hair dye and endless eyeliner, or a random assortment of the above, all awash in a righteous rebellious attitude. Punk, one would assume, doesn’t make the average listener immediately think of cellos, but what’s more punk than challenging conventions and misconceptions? Enter Early Riser.

The four-piece based out of Brooklyn, Early Riser – founding members Kiri Oliver (guitar/vocals) and Heidi Vanderlee (cello/vocals), with new bandmates Nicole Nussbaum (bass/vocals) Mikey Erg (drums/vocals) – have just released Vocations, the band’s follow-up to their 2017 debut, Currents. From the opening title track, Vocations delivers a vibrant listening experience, one that covers empowerment, alienation, feminism (“I am an equal, not an opportunity,” sings Kiri on “Skeleton”), and the struggles of finding one’s place in the modern world.

Vocations is abundant with elevated songwriting, rife with relatable lines that will resonate deeply  (“Now it’s ten years later / and I kinda realize / looking up to you is kind of hurting my neck,” goes one poignant lyric on “Drop The Torch”). These ten tracks soar, with the rich sound of the cello deftly woven into such a wild sonic tapestry that sees every member shine. Vocations is a brilliant, invigorating experience for all.

Ahead of the album’s release, Early Riser’s Kiri Oliver spoke with HollywoodLife about how the band’s signature sound came about, how they were able to shoot the video for “Vocations,” and who they’d love to play with once it’s safe and sound for music to return. 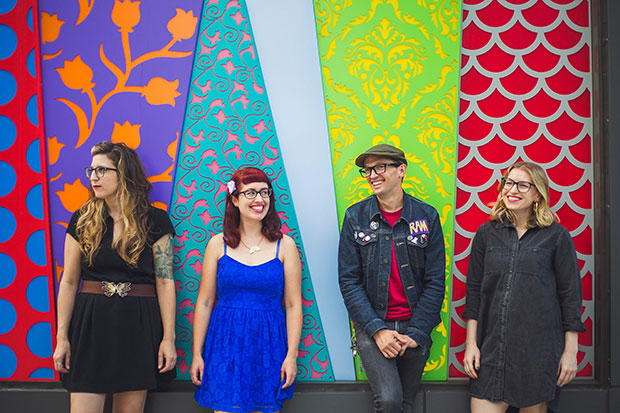 HollywoodLife: First off – how did you discover that cello works for punk music? It strikes me as a ‘you got peanut butter in my chocolate / you got chocolate in my peanut butter’ moment.

Kiri Oliver: It was a gradual process – Heidi and I used to play together in more of an indie rock band, and when it broke up, I asked her to play on my acoustic solo project, which was already named Early Riser. Right away, the cello became the lead instrument rather than a background texture like it is for many bands. We played all sorts of shows as an acoustic duo, but we were both involved in the DIY punk scene, and we felt way more at home on those shows than on folk or singer-songwriter type shows. However, at punk shows, people would often talk over our set, which made us really want to form a full band.

Vocations is your second full-length, following 2017’s Currents. What would you say is the most significant change, music-wise, from your debut? Are you more confident in what Early Riser sounds like? Bolder songwriting?

The biggest change was definitely getting our permanent lineup together and writing the album as a full band, as opposed to adding bass and drums to songs that started off acoustic. The songs are faster and have more of an energetic, anthemic feel. All four of us sing, which helps contribute to that.

Gotta say that the anti-gatekeeping/pro-self-acceptance anthem “Wallflower in Red Lipstick” is a standout to me, personally. I assume that (sadly) it’s based on real experiences?

It is–when I was younger, I struggled with finding my own identity and style because I got a lot of feedback and pressure from my peers about how to act and look in order to be “cool” or acceptable to them. But it has a positive ending in terms of building self-esteem and deciding to be my true self, and also choosing friends that like and accept me for who I am.

The DIY video for the title track has the charm that’s found throughout the album. How did this visual come about?

We had wanted for a while to make a video with Jess Lane, a super talented comedy director. She’s out in LA now, but that ended up working out since we had to make the video in quarantine anyway. She directed each of us on Zoom as we filmed ourselves on our iPhones in our apartments, and then she animated it to turn us all into astronauts. We love that the video captures the familiar feeling of being stuck in one place and having to decide what to do with your time, but with a fun twist.

You said that Vocations was written before the pandemic. Was it all done before COVID-19 hit, or was it recorded all last year (and if so, how did that happen?)

It was totally done before the pandemic hit, and we were getting ready to release it last spring. But since we ended up having all this extra time, we used it to work on the art. I made a bunch of watercolor paintings (my quarantine hobby) and our bassist Nicole did the design. So we were able to visually capture the themes of the album in a way that also felt true to our experiences of the last year.