‘The pandemic helped me to shift my focus to the medicinal qualities of food.’

“There is only one way to live life: you have to keep reinventing yourself,” Sanjeev Kapoor, one of India’s first celebrity chefs, tells Akshara Srivastava/Business Standard as they sit down for lunch.

It is hot and muggy in Delhi where I am, while across the screen in Mumbai, it is raining cats and dogs.

In front of Kapoor is a plate of egg rice, some stir-fried chicken in black bean sauce, with a side of stir-fried French beans and shiitake mushroom, ordered from Yauatcha in Bandra Kurla Complex (or BKC) — which, I was told, was the best Asian place in the city.

I have a plate of wheat pasta with some grilled chicken that I made using Kapoor’s recipe.

While preparing the meal, I was taken back to Sunday mornings as a kid, when we would wake up to watch a new episode of Khana Khazana, his 45-minute cookery show, directed by Hansal Mehta, that ran from 1993 to 2012 (the first episode was hosted by Chef Harpal Singh Sokhi).

When I relay this to Kapoor, he is thrilled.

The virtual lunch is telling of the times we live in — forcing us to reboot and rethink our lifestyle.

After two gruelling years of the pandemic, as most of us try to get back to some sense of normal, Kapoor is busy working on his new collaborations.

“The pandemic helped me to shift my focus to the medicinal qualities of food. It was a learning experience, which has led me to work with the pharma industry now,” he tells me, choosing not to disclose the names of the companies he is engaging with.

Coming out with a line of immunity-building foods, he has already launched two products, which includes a turmeric-flavoured lozenge (Turmgel turmeric lozenges).

“The benefits of curcumin are many and we Indians have always recognised them,” he says from experience.

“After two bouts of Covid, it was something that really helped me — turmeric is anti-inflammatory, anti-oxidant and much more, and it made perfect sense to start an immunity-building line of products using it.”

While it was a time that encouraged everyone to don the chef’s hat and whip up some treats, the 58-year-old masterchef was dishing out gourmet food for his family.

And when he was not doing that, he was working to provide meals to health professionals and migrant labourers caught in the thick of the pandemic. 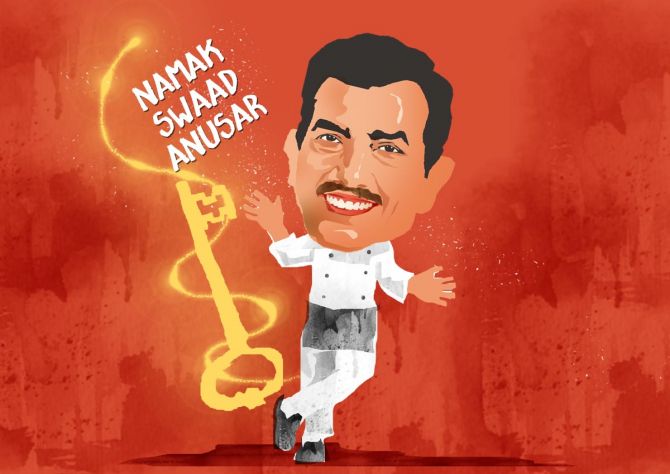 We pause to take a few bites and I am suddenly aware of the salt in my pasta.

My mind instantly goes back to Kapoor’s ‘namak swaad anusar‘ (salt according to taste) — his famous one-liner from Khana Khazana.

Taking a trip down memory lane, he tells me, “When they approached me for the show (Khana Khazana), they told me everyone wants to do it. That almost made me not do it.”

He could, however, foresee that TV was going to be the next big thing.

“But I didn’t like what it was being called, and got the name changed.” (The show would have been called Shriman Bawarchi if not for Kapoor). The rest is history.

Kapoor seems to have always predicted the curve and stayed ahead of it — whether it was his long-standing association with TV, which included the launch of his own TV channel FoodFood, or the move to YouTube, or the eventual and seamless sashay into the limitless world of social media.

“It is the normal course of life. You have to adapt and adjust to what is happening around you,” he says, as he bites into the mushroom.

So now the chef is experimenting with artificial intelligence in the kitchen, with his app Tinychef.

“I adapt to technology very fast. The one thing that caught my interest was Amazon’s voice assistant, Alexa,” he says.

“I realised it can be used for content — especially to cater to a younger demographic. So, we adapted content through smart devices.”

“These are intuitive calls that you take. Not all of them will be right and you are bound to fail, but a lot of times they work out wonderfully,” he says, adding, “Tinychef’s association with Amazon has been great and we happen to be one of the largest culinary partners with them, globally.” 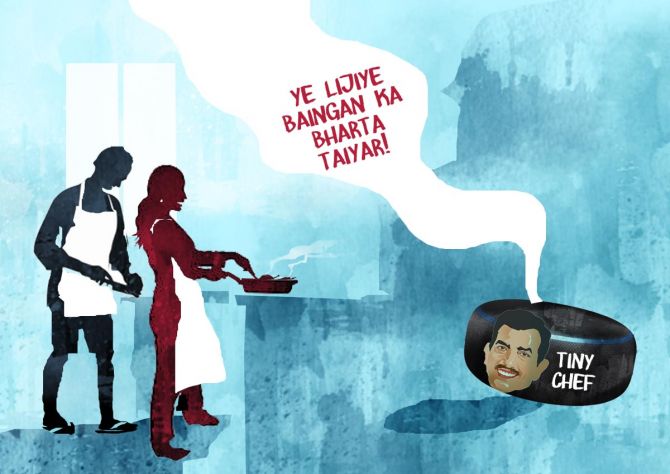 But while he may be eagerly embracing the digital space, Kapoor remains a traditionalist at heart.

As new food trends go viral every week, he believes it is consumption that defines their success, not just the conversation around them.

This stands as true for dalgona coffee as it does for molecular gastronomy.

“How many times did you make dalgona coffee?” he asks.

“So it is the same as molecular gastronomy.

“It is on everyone’s minds and going viral, but not everyone is having it.

“While I remain very neutral about the concept, its success rate would have shown in a larger number of restaurants doing it.”

With more than 30 restaurants and a premium cookware brand to his name plus his AI app, which has grown to 2.2 million users since its launch in 2019, Kapoor takes a minute to reflect on his journey of almost three decades.

“It’s not like I did not struggle to make a place for myself; I just don’t like to dwell on the challenges.”

He goes on to recount the one time he slipped and fell into a tandoor.

With a grin, he says, “What could have been a disastrous incident is now, in fact, a funny anecdote. That’s what life is — not always a cakewalk.”

As we start wrapping up, Kapoor has a lot to look forward to — starting with his daughter’s wedding this year.

On the professional front, there is his empire — spanning his TV channel, social media and AI content, and restaurants.

He has seven restaurant brands across the world, including in Dubai, Doha, Abu Dhabi and Brampton in Canada.

In store are also two new launches — a line of frozen foods and meal kits in collaboration with Amazon.

With that it’s time for dessert.

Kapoor enjoys a hazelnut chocolate mousse with a latte, while I bite into a “healthy laddoo“.

He is immediately interested. It is something my mother makes at home, I tell him, while he guesses the ingredients — chia seeds, dates, almonds, among others — all correctly.