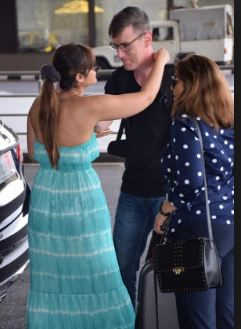 Goa beauty Ileana D’Cruz is a stunner. She is one of the actress who always impressed the audience with her fabulous acting skills. Ileana has always kept her professional and personal life separate and she knows where to draw a line. Recently, Ileana D Cruz was spotted at the airport to see off her photographer husband Andrew Kneebone. Ileana kissed Andrew publicly at Mumbai airport when she had to send him off to Australia. The actress was very emotional that time. Although, Ileana is not very vocal about her personal life, her social media pages are flooded with her pictures with hubby dearest Andrew Kneebone. The pics of Ileana with Andrew Kneebone at the Mumbai airport are going viral on social media.

After establishing her name in Telugu and Tamil film Industry, Ileana D Cruz made her Bollywood debut with the 2012 film Barfi! helmed by Anurag Basu. The actress received critical appreciation for her character in the film which also stars Priyanka Chopra and Ranbir Kapoor.

In Tollywood, Ileana was last seen in Mass Maharaja Ravi Teja starrer Amar Akbar Anthony, directed by Srinu Vaitala but unfortunately the movie was bombed at the box office. Currently the actress is busy in her upcoming Hindi movie Pagalpanti, directed by Anees Bazmee and produced by Bhushan Kumar, Abhishek Pathak, Krishan Kumar and Kumar Mangat.