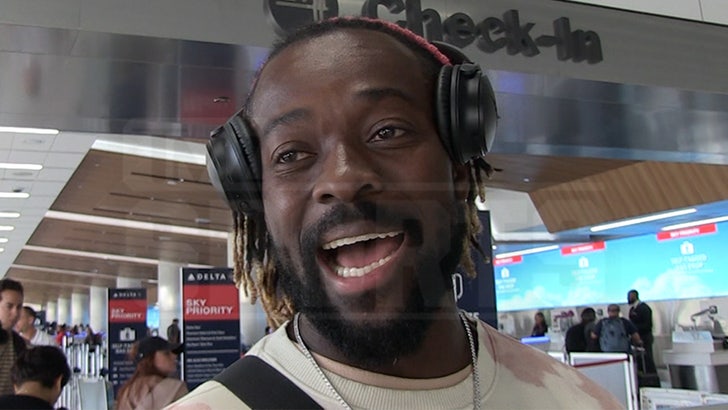 Kofi Kingston is in awe at how fast Logan Paul has transitioned into a WWE Superstar … telling TMZ Sports the YouTuber’s skills in the squared circle are unreal!

We recently caught up with Kofi — a 14x WWE tag team champ — out at LAX, and he told us Paul’s star power, coupled with his ability to pick up the craft quickly, makes him a perfect fit for WWE.

“To me, it just makes sense,” Kingston said. “When you think about how popular Logan Paul is and even his entire story. His come-up and what he’s been able to do in the world of boxing and entertainment in general, it would only make sense for us to be hand in glove.”

Kofi praised Paul — who alongside The Miz, wrestled his first match against Rey and Dominik Mysterio at WrestleMania 38 — saying, “he has a bright future ahead of him.”

“To see what he did in the ring is very impressive,” Kofi said.

“Especially as a performer who has seen a lot of people and has gone through the whole learning process, he shouldn’t be that good, that quickly.”

Kingston — 1/3 of the “The New Day” — said he takes Logan’s word when he says pro wrestling is harder than boxing  … adding it’s a “true art.”

“Well, I’ve never been a professional boxer, but it’s awesome to hear him say that and kind of put respect on the grind that is WWE.”

Kingston also said Big E‘s injury — where he was dropped on his neck by Ridge Holland following a botched move — reminds him how scary it is being a WWE performer.

“With E’s situation and him breaking his neck … you’re reminded of just how dangerous what we do is,” Kofi said. “It only takes one second for everything to go awry.”

“With his situation, we really lucked out.”