When a social media user claims that the POOSH founder has altered a lot of parts of her body but in a subtle way, the mother of three sarcastically replies, ‘um thanks.’

AceShowbiz –Kourtney Kardashian knows how to turn a negative comment about her into a positive feedback. Instead of berating a troll who accused her of having gone under the knife to enhance her look, the reality TV star has thanked the hater for the “compliment.”

Kourtney’s recent interaction with the troll happened after PopCultureAngel shared a post that featured throwback photos and videos of her and her famous sisters, including Kim Kardashian, Khloe Kardashian, Kendall Jenner and Kylie Jenner, as well as momager Kris Jenner. When one fan noted that Kourtney was the “only one who really didn’t change,” the hater disagreed.

“Kourtney got plenty of surgery!” the troll alleged, claiming, “She just did it in an extremely natural way that still complimented her features instead of change them.” The hater went on mentioning what kinds of surgeries that they believed Kourtney has had, “Botox, nose job, some sort of butt shot or bbl just to start.”

Kourtney caught wind of the comment and didn’t waste a time to clap back. “no better compliment than a too good to be real kind of compliment,” she sarcastically wrote back to the hater. The 42-year-old added, “butt shot and brazilian butt life, um thanks and you were just getting started.” 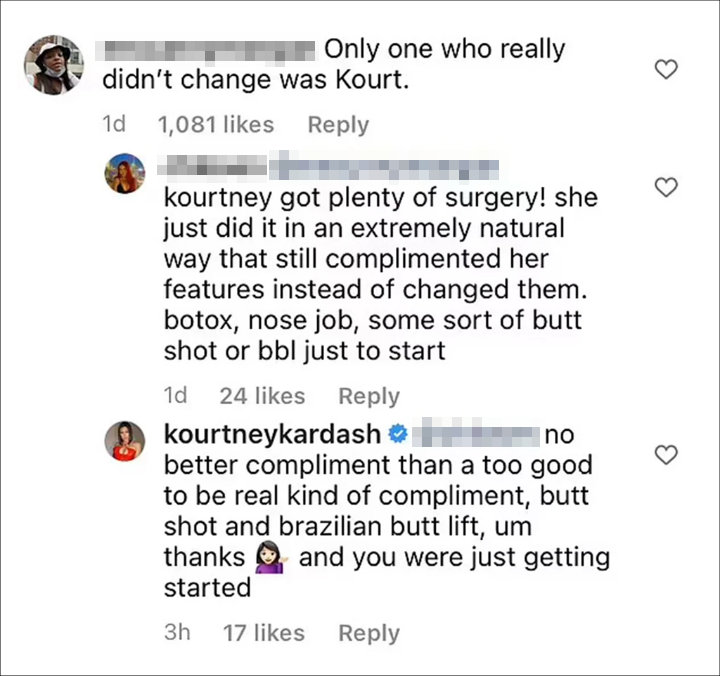 Kourtney Kardashian responded after a troll accused her of having multiple plastic surgeries.

While there were several snaps of the Kardashian siblings in the post, one particular photo that perhaps sparked the plastic surgery allegations was the one that featured Kourtney and her sisters Kim and Khloe posing in bikini. In the throwback image, the trio all looked fairly different from they are now.

Some other users have also weighed in on Kourtney’s changing look, with one writing, “are you kidding she looks completely different lmaooo.” Another argued, “in the first few seasons of keeping up you can literally tell she looked older then than she does now, she did a lot of work on her face but did a great job.”