Paddy and Christine McGuinness SPLIT: Couple confirm they separated ‘some time ago’ amid cheating rumours and ‘remain living together in family home with their children’

Paddy McGuinness has split from wife Christine after 11 years of marriage, MailOnline can exclusively reveal.

The couple have been ‘living separate lives’ for months and their recent wedding anniversary was a non-event, with neither posting on social media about the occasion. 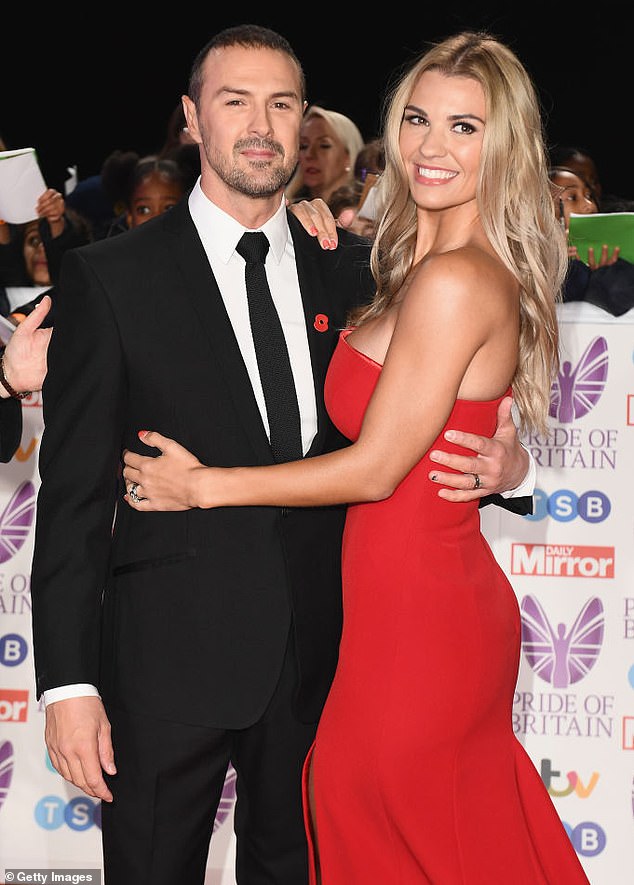 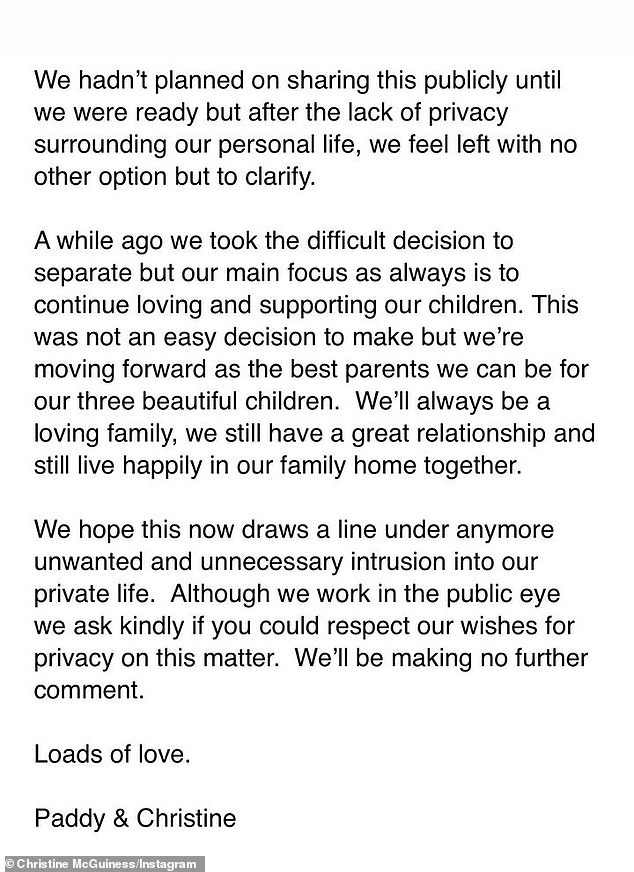 All over: Paddy McGuinness has split from wife Christine after 11 years of marriage, MailOnline can exclusively reveal

A source explained: ‘Paddy and Christine have given everything to their marriage over the years.

‘Sadly, they have made the tough decision to part ways for the sake of their young family, who they will continue to co-parent together.

‘It’s been no secret within their inner circle that it’s been a difficult few years for them as a couple but they still very much support each other and will continue to do so throughout their separation.’

Their breakup comes four months after the couple released their first podcast, Table Talk, together, which discusses the realities families with seriously ill or disabled children face.

It follows their critically acclaimed BBC documentary Our Family and Autism, where they spoke in detail for the first time about raising their three children with the condition.

Former Take Me Out presenter Paddy admitted he found their diagnosis ‘hard to come to terms with.’

He said: ‘The early days when we knew nothing about autism were really tough.

‘The kids didn’t sleep; they’d have meltdowns at loud noises and bright lights and nothing we did helped. We kept the curtains closed and hardly let anyone into the house.’

Paddy’s biggest fear is that his children will fail to recognise how loved they are because their autism causes them to struggle with emotion.

In the documentary, which aired in December, Christine explained: ‘He’s said this for years about the love thing and it’s not something we’ve disagreed on, but Patrick has worried for years that the children might not feel loved, or they don’t understand it.

‘I’ve always said they do; they struggle to show it and struggle to appreciate sometimes everything that we do for them because they’re autistic.’

Christine was diagnosed as autistic herself during the documentary, confessing that she struggled in school, had few friends growing up, and preferred spending time on her own.

The Games contestant revealed she spent eight years of her marriage to Paddy inside their home because she felt uncomfortable around people.

She said: ‘In my 20s I had around eight years of just staying in and avoiding any kind of contact with anybody other than my husband. I just avoided everyone. I didn’t socialise, I’ve never really had friends so it’s never been an issue.

‘It’s something that I’ve thought for years and even at school I always felt different. I have known there is something.’

Christine met Paddy while modelling at a Liverpool Tennis Tournament in 2007 and the pair married during a lavish wedding at Thornton Manor three years later.

Their relationship appeared strained in February 2018 when Paddy was pictured arm in arm with former All Saints singer Nicole Appleton.

Christine spoke about the couple’s ‘difficult’ marriage shortly after the images of Paddy and Nicole, 47, who were spotted in London’s Soho, were made public.

In March 2018, she said: ‘It’s been difficult recently. I want us to spend more time together, to do stuff together.

‘I wish he would stay home more, or that I could go with him. But we are happier than ever, we have been putting the effort in.

‘There have been times when he’s left to go to work and I’ve waved him off and then I’ve gone back into the house and cried thinking I wish he would just stay in.’

In his biography, My Lifey, which was released last year, Paddy said in the chapter entitled Marriage and Kids that himself and Christine are ‘polar opposites with no common interests.’

He explained their relationship had survived so far because of the laughter they share together and their mutual interest in lovemaking.

Paddy wrote: ‘We don’t like the same films, TV programmes or food, we wouldn’t have a night out together, and we annoy each other most of the time.

‘I hardly know any of her mates, and aside from living in the same house we have totally separate lives.

‘So why are we still married after a decade? Answer: we laugh and make love… a lot.’