Paul Rudd continues to be the nicest celebrity ever. He handed out yummy cookies to early voters waiting in line during a pouring Brooklyn rainstorm to cast their ballots.

Paul Rudd is seriously a national treasure. The beloved 51-year-old actor proved again why he’s simply the best when he braved a heavy downpour in Brooklyn to hand out cookies to voters stuck in a very rainy line outside Barclays Center. They had arrived to cast their ballot in early voting and avoid the anticipated long lines on Nov. 3, and the Ant Man star was right there to help make their day a little brighter…and tastier! This man is human sunshine.

Paul didn’t even use an umbrella, as he stood with a baseball cap on and a mask covering his famous face while he handed out goodies. “I want to say thank you for coming out and voting and doing your part,” he explained to the voters in line, while giving them pre-wrapped cookies.

Twitter user Brian Rosenworcel captured the moment on video and shared it to Twitter, causing Paul’s name to become a top trending Twitter topic. “I’m voting in Brooklyn and Paul Rudd is handing out cookies,” he captioned his post, to which people shared and praised the Clueless actor for being such a completely decent guy.

Brian later shared that “Paul Rudd gave me a ‘blueberry ‘n cream’ cookie, naturally. What a MENSCH,” while holding up the sweet treat. When one user told Brian, “I wouldn’t normally eat something from somebody I don’t know, but I’d definitely eat a cookie from Paul Rudd,” he responded back, “It was Blueberry and Cream…which is a sort of cookie that I would expect Paul Rudd to hand out.” Totally! 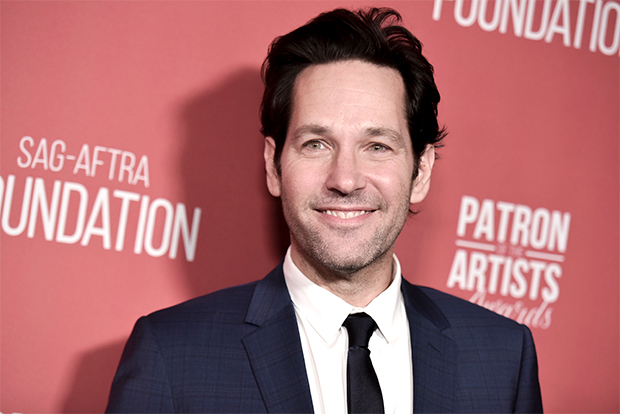 Not only that, Paul was a great guy to all of the beleaguered and rain-soaked voters. When user @robinstillrocks commented, “Paul Rudd couldn’t get more adorable. What a lovely human being,” Brian told him that Paul, “Made eye contact with every person in that line.” SWOON!

User @Wpark83 pondered, “How is there so much good in one human being?” as @Cmango1221 responded, “We could all learn to be a little kinder from Paul Rudd.” @mavericksmovies tweeted, “Seeing Paul Rudd do stuff like this, and knowing that he’s 51 and looks like he does is proof positive that being a happy and kind person keeps you looking young.” Even Ellen DeGeneres gushed under the video, “He might actually be the world’s most perfect man.”

The site @nowthisnews actually ran into Paul doing his good deed, and he explained his actions. “It should not be hard to vote. People should be getting the day off of work. Polling places should be everywhere. This should be easy, not difficult,” the never-aging actor explained. “One of the things that’s been really encouraging is seeing how many people are coming out early and voting all across the country. Anybody who is waiting in line deserves to be thanked and encouraged and recognized and that’s what we wanted to do.” Sigh, can’t we all be so lucky to get a cookie from Paul Rudd at our polling places?