SANTA FE, N.M. – Since the investigation into the death of “Rust” cinematographer Halyna Hutchins at Bonanza Creek Ranch in Santa Fe, New Mexico, after a shot fired from a gun actor Alec Baldwin was wielding also left director Joel Souza wounded, on-set safety – or in this case, an alleged lack thereof – has remained a supreme topic of conversation in Hollywood.

Fox News met with writer, filmmaker and Santa Fe Community College professor Milton Riess, who has worked on nearly 300 film and television productions in his some 40 years in the industry. He also helms the college’s film program, which rivals those of the most astute universities and sees many of its students landing employment as certified production crew members in the International Alliance of Theatrical Stage Employees (IATSE) union in half the time thanks to its lengthy but stringent hands-on approach to safety and the overall process of film project production.

In just one of Riess’ many jobs in the world of cast and crew, he worked as a Hollywood production “fixer” — going undercover at various productions ripe with attrition —  which included high turnover by crew members quitting or being unhappy in some capacity and reporting back to the showrunners or the networks about suggestions he felt they needed in order to change the morale and fix their crew issues.

Fox News sat in on Riess’ screenwriting class, where his students were engaged in a table read of one of his television series, which has seen five revisions since 2004 and at one point had been optioned by a network but ultimately went the way of countless others and never saw the light of day.

Tongue-in-cheek, he still has hopes for the title and admitted point-blank to his class that he once made a cardinal mistake in a pitch meeting, which was immediately cut short after he declined a suggestion from potential financiers to turn the project into an animated children’s series.

“Never remove options from investors who are making decisions based on whether they want to work with you for the next five to 10 years,” he lectured to an echoing production sound stage housing just 11 students – a mere few were absent that night.

While Riess said he exhaled in earnestness at the news of the deadly shooting on the “Rust” set, he lamented the tragic incident “didn’t really surprise [him].”

“Maybe it’s cynicism,” he questioned. “It shocked the hell out of me. I was depressed. I was pi–ed off but really, when it comes right down to it, it didn’t surprise me.”

The armorer on the Alec Baldwin (pictured) movie "Rust" spoke out about the on-set accident and pushed for safety meetings on the Baldwin-produced film but was denied.
(Jim Spellman/Getty Images)

The film’s armorer, Hannah Gutierrez Reed – who was responsible for the safety and handling of firearms on the set and was one of the very few people who handled the gun prior to Baldwin discharging it on set last Thursday — said she pushed for safety meetings on the Baldwin-produced film but was rebuffed at every turn.

Gutierrez Reed, in a statement made through her attorneys Jason Bowles and Robert Gorence that was provided to Fox News, blamed rushed conditions on the low-budget set for the tragic mishap. She also disputed rumors that the crew used live ammunition for target practice and denied responsibility for two discharges that happened previously.

“Safety is Hannah’s number one priority on set,” her attorneys said. “Ultimately this set would never have been compromised if live ammo were not introduced. Hannah has no idea where the live rounds came from.”

The statement notes that Gutierrez Reed continues to assert her claim that she never witnessed live rounds used in any of the guns she handled for the movie “Rust.” The attorneys also noted that she would not allow the use of live rounds under any circumstances.

Riess, a Tinseltown production lifer-turned-professor who moved to Santa Fe eight years ago after burning out of the business, believes the overall standard of safety on production sets has faltered in the years since he worked as an assistant armorer on film projects early on in his career and “had to go through two weeks of serious military-style training for implied-firing gun safety.”

“We worked with every actor that handled the gun and taught and showed them exactly what this is and what this does. This is the damage it can do – even a blank, the whole works – and they paid attention,” Riess explained. “And because we had automatic machine guns, we had to have police there every day.”

“We had to store everything in a portable locker that had wheels but it was locked and nobody had access to it. I mean, I didn’t even have access to it and it was the props master that is the only person who had access to that,” he added. “And the machine guns had to be taken every night to the police station and signed in and the next morning or the next time we picked them up, the guns had to be signed out and driven to set – it was that serious.”

The instructor also took a slight bit of umbrage with the Santa Fe Sheriff Department’s explanation of the amount of ammunition that was allegedly discovered after the shooting took place – which in addition to the bullet doctors pulled from director Souza’s shoulder, included a mix of blanks, dummy rounds and what appeared to be live rounds. 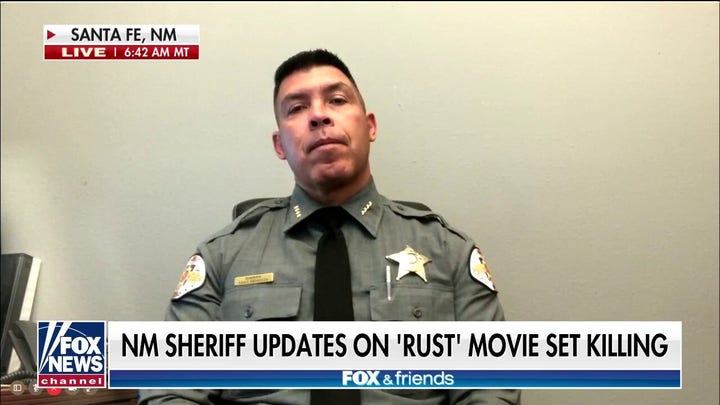 “I wish the sheriff would have explained it a little differently,” said Riess. “I thought he was not careless but his choice of words could have been picked a bit better when he said they found 500 rounds of ammunition. Immediately everybody thinks 500 rounds of bullets. I know what people are going to take away from that – first, they hear the 500 rounds and they don’t hear anything else past that. That’s a problem.”

Riess said he finds the reports of alleged lack in safety measures “puzzling” to say the least considering the paramount importance of general gun safety but an even heightened significance given the scope of the “Rust” being a western where presumed gunplay would likely be in effect.

“There’s always been low-budget and there’s always been careless production,” he said. “Hiring the right person is going to cost a little more money, but think about in terms of preventing an accident, half of what filmmaking or the crew world of filmmaking consists of is looking at a scenario, seeing what can go wrong and then preventing it.”

Concept stripped down to its core, Riess said to look at filmmaking and TV production as a “factory” for creating projects – and understanding that “every factory has accidents.”

Director of photography Halyna Hutchins (left) was killed in the incident while director Joel Souza (right) was injured. He has since left the hospital.
(Getty Images)

“I don’t care what product you’re producing, I don’t care if it’s a light bulb, a car or a movie – it’s a product,” he explained. “Every industry has accidents and in order to remove that out of the equation as best you can is you begin every day with safety – you work safely and you end it safely every day.”

Still, Riess maintains that everyone on a production set is responsible for one another, and ultimately the project’s associate director – which for “Rust” was first assistant director Dave Halls – should be at the helm of ensuring everyone is operating in a safe manner at all times.

“Yes, you take a half-hour, 40 minutes, not usually longer than an hour to really explain to everybody what the protocol is – if we’re shooting in an aurora or riverbed if there is a flash flood, this is our escape route, leave this and take that, etc.,” Riess pressed.

“It’s required for a crew and even sometimes cast to get into a big kumbaya circle and just say, ‘OK, guys, this is what we’re up against’ – they introduced this on-set medic if it’s the first day – who is doing what and if you have any questions, talk to this person – this is the craft services, etc.” he continued. “It takes a little extra time, yes – but who cares? It’s about safety.” 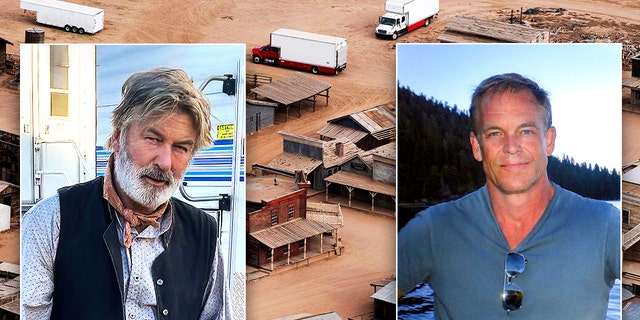 "Rust" cinematographer Halyna Hutchins was shot by Alec Baldwin (left) after he was handed what he believed was a "cold" or "unloaded" gun by assistant director Dave Halls (right) on the set of the indie film during a rehearsal. Halls was unaware that the firearm was loaded, according to records.
(instagram  |  AP Photo/Jae C. Hong  |  IMDB)

“There are ways to cut corners and but you don’t cut that one,” he added. “And again, if you don’t have the money, then maybe you should reduce your production down so that it fits in with what money you’ve got.”

Production on the film has been halted until the Santa Fe Sheriff’s Office completes an investigation into the incident.