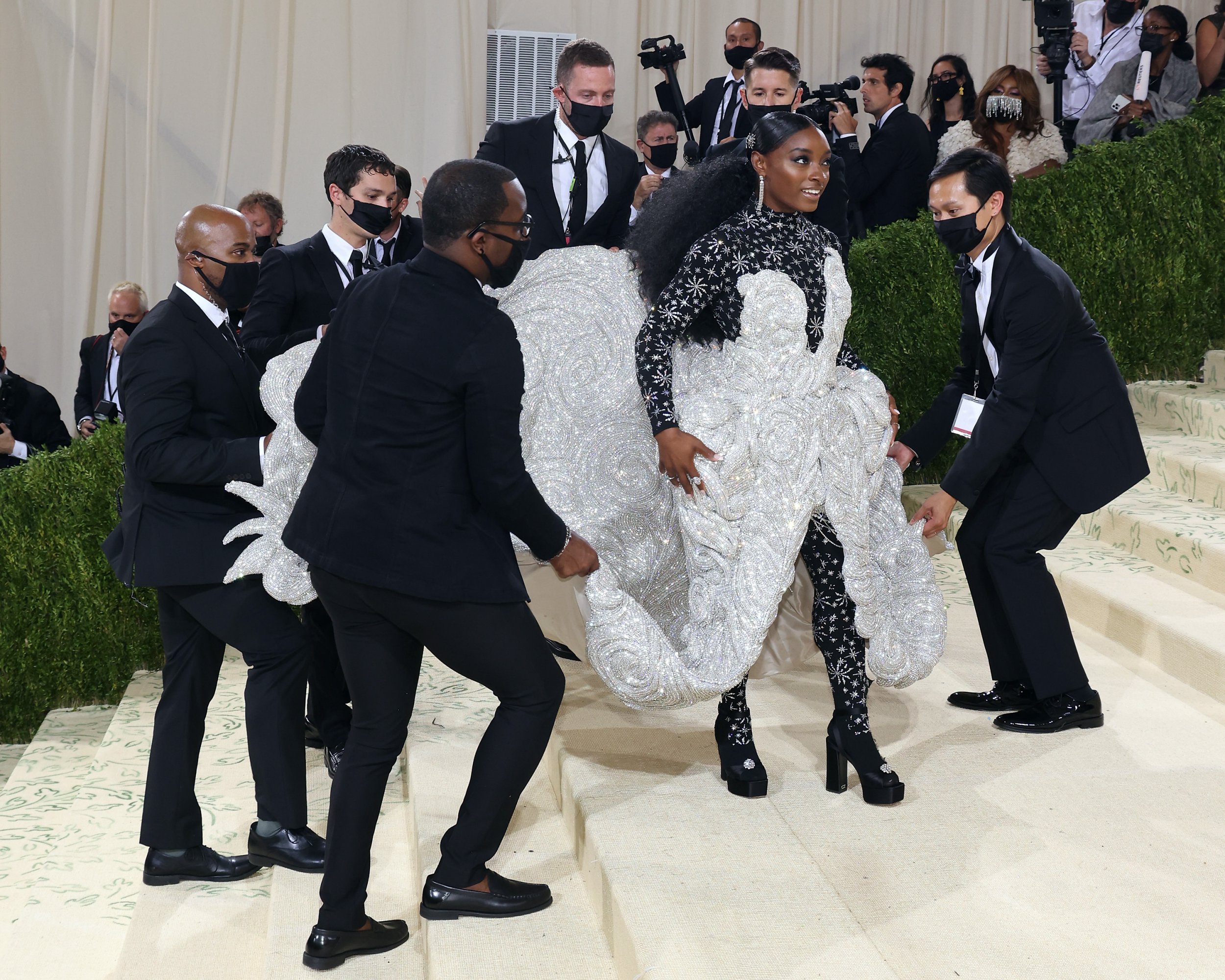 Don’t underestimate the power of the sports star on the Met Gala red carpet. Case in point: Simone Biles, Naomi Osaka and, owning it for another year, Serena Williams.

Sure sports are always kicking about, but this year has turned the hype up to 11, with Biles’s Tokyo 2020 Olympics bid and Osaka challenging the treatment of mental health within the sports world (as did Biles, we should add) winning all sorts of kudos.

And don’t even get us started on Emma Raducanu’s epic US Open win mere days ago. She’s gone from her A-levels, to winning the Open, banking a couple million and now she’s celebrating in Chanel.

This year’s Met Gala theme is In America: A Lexicon of Fashion, described as an exploration of the nation’s sartorial identity and a deep dive into American ingenuity. And it’s fair to say everyone has interpreted that in a different way.

The looks are great, whatever, but can we please talk about the fact the mighty Biles walked that Met red carpet in a dress weighing 88lbs?

The three-in-one outfit was designed by Beckett Fogg and Piotrek Panszczyk of Area, and we’re talking Swarovski crystals, a minidress and glittering black catsuit combo, decorated to look like a starry night’s sky.

Fun fact, each of those stars was Athleta’s logo, with Biles being a brand partner.

Super fun fact, the train was so heavy and intricate a team of six men had to carry it up the Met steps after Biles.

The fact the 4ft 8 sportsperson didn’t topple backwards down the stairs, Jason Derulo-style, is a testament to her power.

Vogue reports over 100 people worked for 6,650 hours to embellish and craft the three-in-one look, which, according to Panszczyk, was finished ‘around 4am’ on Sunday. Nothing like a rush to the finish line to score gold.

Met Gala pro Williams walked the carpet alongside husband Alexis Ohanian in a silver Gucci bodysuit with embellished stars. She teamed it with a feather-laden cape with a long ombré train that trailed behind her.

Describing the outfit as ‘superhero inspired’ the Goat brought it, if we do say so ourselves.

Now we bring you to Osaka, one of the co-chairs of the evening, whose look was an homage to her heritage.

She sashayed into the event – which was postponed last year due to Covid – in a bold AF Louis Vuitton corseted dress.

Capes were clearly a thing last night, with Osaka’s featuring 22 ruffles, 18 metres of leather satin, and a 50-metre silk hem, according to the brief. In a nod to her Japanese heritage, the print is a digital watercolor art piece by Osaka’s sister and fellow pro-tennis player Mari, that incorporates Koi fish.

Alongside the sports stars, we had the usual red carpet capers, with Hailee Steinfeld looking, and we’re not beating around the bush when we say this, unrecognisable, Cara Delevingne saying it with her chest and Kim Kardashian doing her most to bait the memes.

There was the usual glitz and glam that didn’t do much to tell us about the theme, but other stars went above and beyond in their effort to make political and social statements with their looks.

He explained: ‘We wanted to celebrate queer love and visibility – acknowledging how hard artists like Wojnarovicz had to fight, while also presenting the imagery in a way that offered a hopeful message. Tonight, we’re celebrating the resilience, the love, and the joy of the community while honouring a crucial American voice that was taken from us too soon.’

Meanwhile, congresswoman Alexandria Ocasio-Cortez wore a gown emblazoned with the phrase ‘Tax The Rich’ – although not everybody was impressed with AOC’s message while attending a $30,000-a-ticket event.