Spice Girls Reunion Tour: Geri Horner and Mel B laugh off lesbian romp claims during first show in Dublin… as they joke about Ginger Spice quitting the band

Geri Horner and Mel B laughed off claims that they were at loggerheads on Friday, as they took to the stage to perform on the first night of the Spice Girls reunion tour.

The pair got very cosy as they took to the stage in Dublin’s Croke Park Stadium, after endless reports that the pair had fallen out over Mel’s claims that they had a lesbian romp years earlier.

It came as Geri, 46, and Mel, 43, joined band-mates Emma Bunton and Mel C for the long-awaited reunion tour, and delighted a crowd of thousands with the medley of their greatest hits. 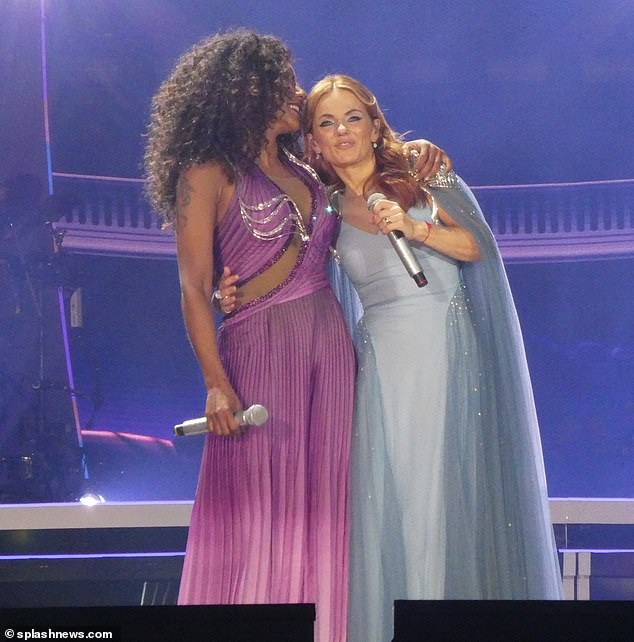 Best pals: Geri Horner, 46, and Mel B, 43, laughed off claims that they were at loggerheads on Friday, as they took to the stage to perform on the first night of the Spice Girls reunion tour

Mel showed off her amazing figure in a slew of different looks including a purple sequinned dress, while Geri oozed regal glamour in a pale blue shimmering gown with a matching cape.

The two stars shared a sweet embrace in between one of their songs as they eagerly spoke to the crowd, appearing to brush off any tension around Mel’s recent revelations.

Geri also embodied her inner queen in an amazing gold sequinned mini dress and matching tiara, and also paid homage to her iconic Union Jack dress with a Renaissance-inspired gown during the show. 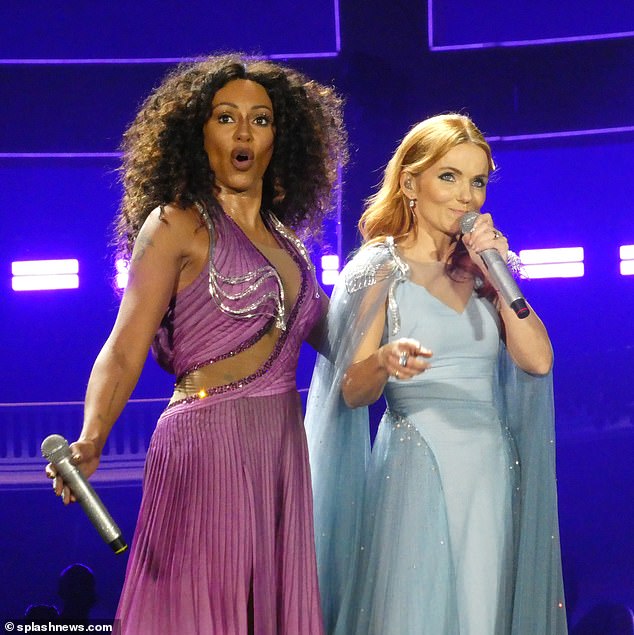 All is well! The pair got very cosy as they took to the stage in Dublin’s Croke Park Stadium, after endless reports that the pair had fallen out over Mel’s claims that they had a lesbian romp

Look at that! During the concert one excited spectator also took to Twitter to reveal the band poked fun at Geri’s 1998 departure 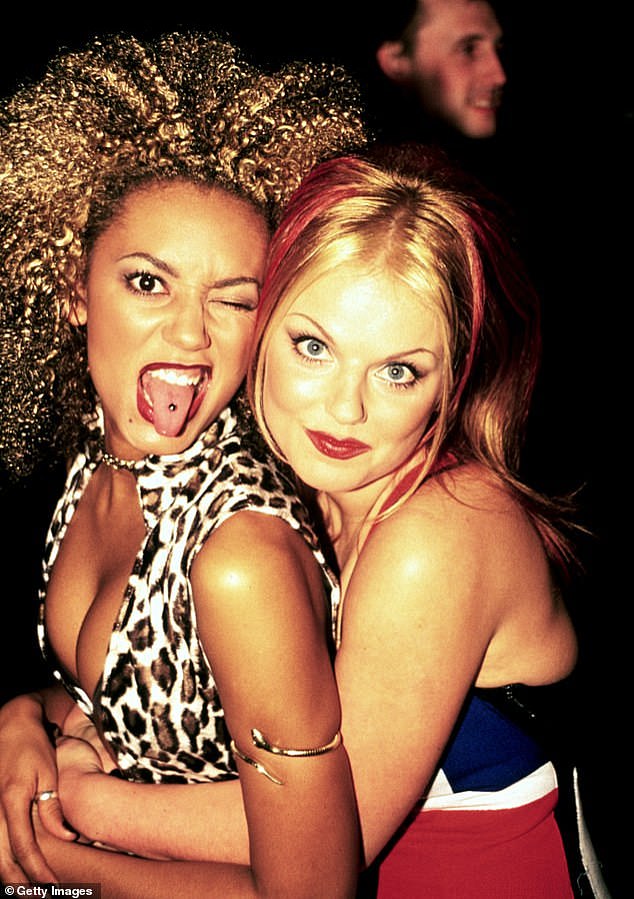 Bombshell: The tour was also rocked by Mel B’s admission that she had sex with Geri, amid claims Mel immediately contacted her to apologise

During the concert one excited spectator also took to Twitter to reveal the band poked fun at Geri’s 1998 departure, which eventually led to the group’s hiatus in 2000.

Earlier this year the tour was believed to be hanging in the balance after Mel claimed she had sex with Geri during the height of their fame in the nineties.

The openly bisexual singer made the shock claim while filming for Piers Morgan’s Life Stories in March, cheekily telling the broadcaster Geri had ‘great boobs’ and adding: ‘It just happened and we just giggled at it and that was it.’ 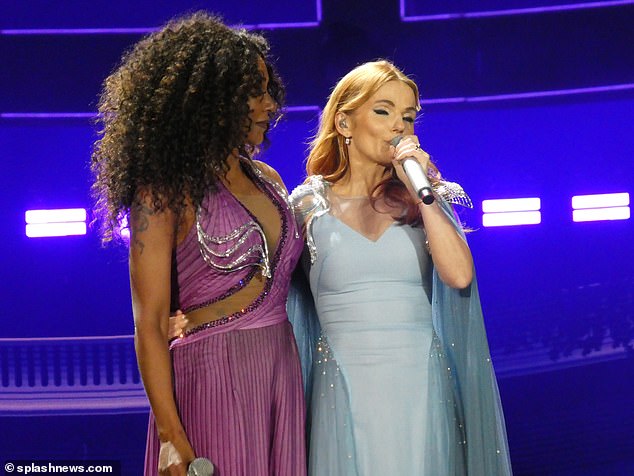 We’re good! But the pair seemed ever-cosy as they larked about together on-stage during the much-anticipated concert

However, the saucy claims of their night of passion reportedly caused great upset, with sources suggesting Mel made a frantic call to Geri, who has denied that the fling ever took place.

Speaking of her time in the girlband – which were together from 1994 to 2000 and are now set for a reunion tour – Mel was clearly not in the mood to hold back as she detailed her relationship with Geri, claiming: ‘We were best friends. It just happened.

‘She (Geri) is going to hate me for this because she is all posh in her country house and her husband, but it’s a fact. It just happened and we just giggled at it and that was it. She had great boobs.’

When Morgan enquired how frequently they slept together, the 43-year-old, real name Melanie Brown, said ‘Oh stop it, you pervert’, before eventually claiming there was a solitary sexual encounter. 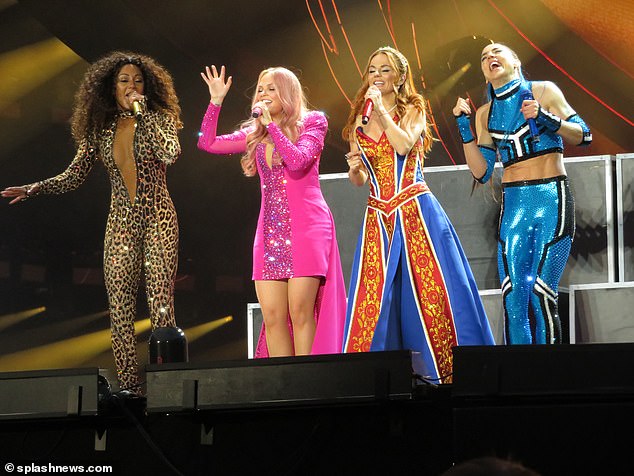 At last! Fans couldn’t hide their delight as the Spice Girls finally took to the stage together for the first time in seven years 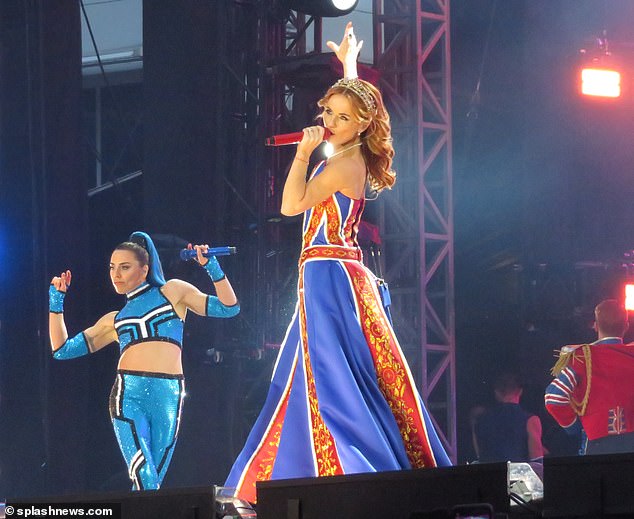 Sensational: Geri paid homage to her iconic Union Jack dress with Renaissance-style red and blue gown with a matching tiara

Piers delightedly expressed: ‘This is a bombshell. A Spice Girls bombshell. You have never admitted this before have you? People are going to be fascinated!’

Mel responded: ‘Yeah and I have said it now. All done. She is going to kill me and so is her husband.’

‘Hopefully when Geri gets asked that, which hopefully she will after this, she won’t deny it, because it was just a thing, a fun thing,’ she stated.

Meanwhile, her bandmate Melanie Chisholm – Mel C – who was in the audience looked shell shocked by the claim, admitting: ‘This is all new to me.’ 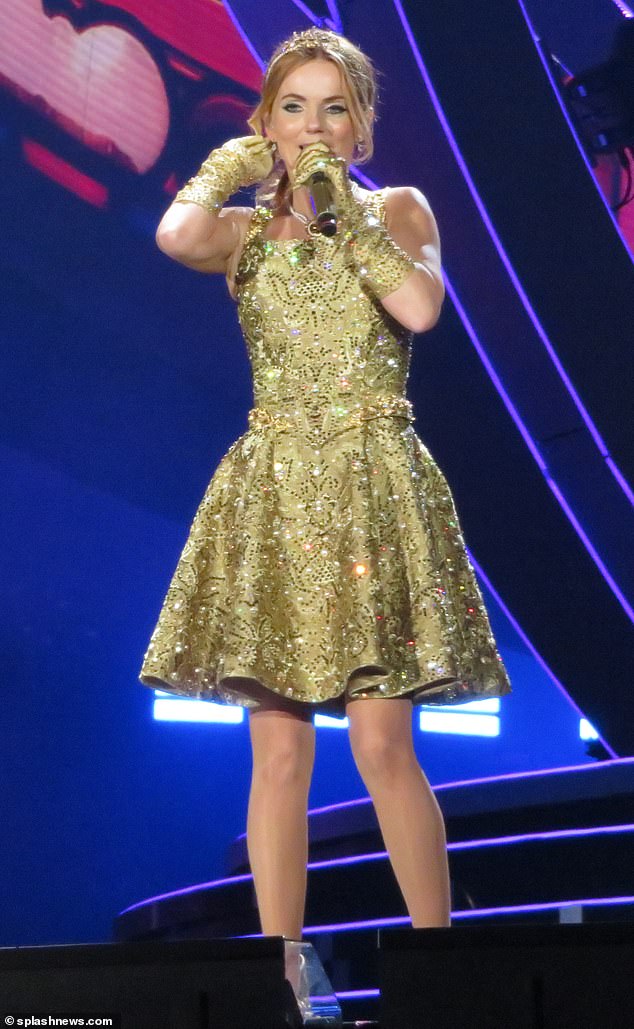 New look: Later the songstress changed into an intricate gold sequinned gown during the concert 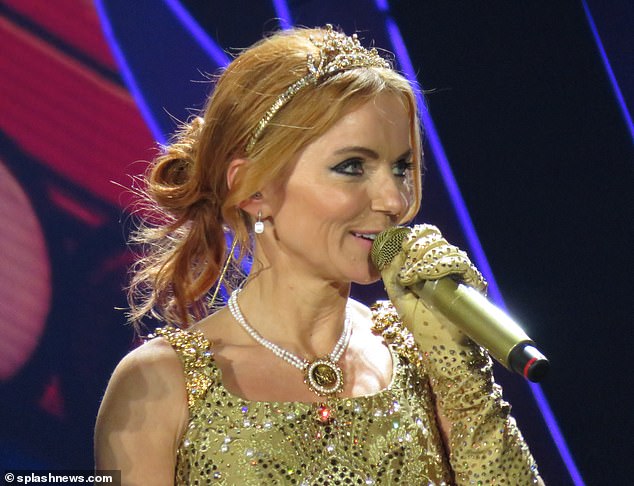 Transformed: Geri was every inch the Queen Of Music in her amazing gold gown, completely with another crown, gloves and a matching microphone 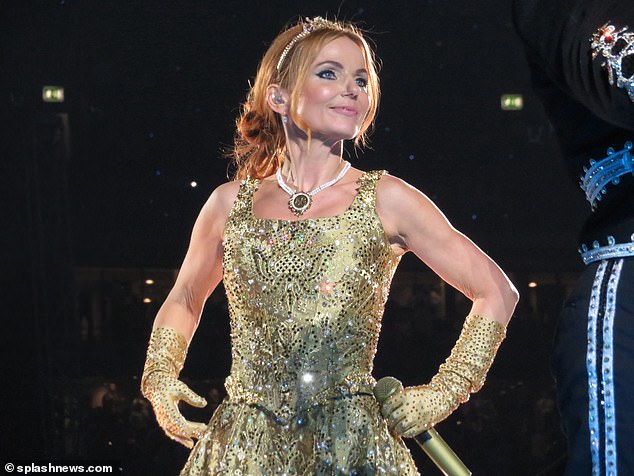 Superstar: The star looked amazing after recent dying her back to the famous copper tresses specially for the out

But it appeared that Mel began thinking twice if the encounter was the correct thing to claim to an audience, as The Sun claim she made a panicked phone call to Geri to apologise.

In light of the alleged call, sources told the publication at the time: ‘The girls all know Mel struggles to keep her mouth shut but Mel C who was in the audience was visibly horrified when it all came out.

‘The tour is just two months’ away they don’t want anything jeopardising it, but there were real fears this would upset Geri’s husband and cause serious issues.

‘Since marrying Christian, Geri has worked hard to shake off her old playgirl image and sort of reinvent herself as this perfect Stepford Wife. Mel immediately rang Geri to try to repair the damage.’ 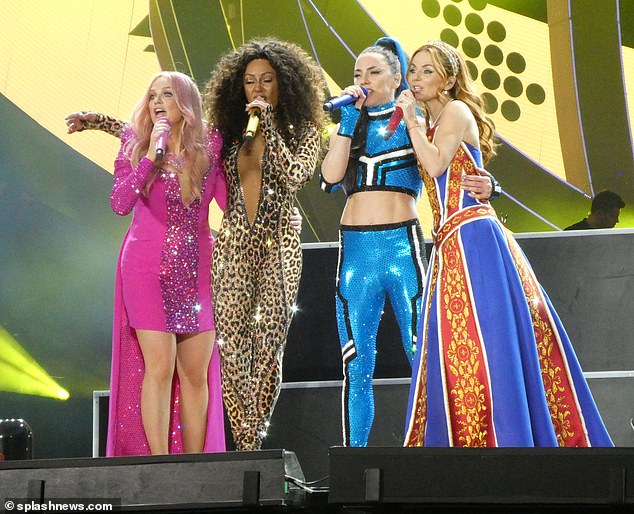 It’s here! The Dublin show saw The Spice Girls finally kick off their reunion tour, which will consist of 13 dates and conclude at London’s Wembley Stadium next month