The Tokyo Olympics have been on almost everyone’s screens this summer, giving people all over the world something inspiring and drama-free to watch. At least, mostly drama-free.

The pandemic has caused a lot of unpopular news around the event as well as ongoing protests during the Games, per CBS. According to NPR, many athletes at the event have been kneeling to protest against discrimination and racism. These demonstrations of course caught the eye of former President Donald Trump, particularly when it came to the US soccer women’s soccer team, USWNT. The team ultimately lost their chance to take home the gold with a 1-0 loss to Canada. Washington Post reports that, “The loss ended the Americans’ campaign to follow up their 2019 World Cup win with an Olympic gold medal.” However, while disappointed, the upset didn’t stop the team from getting the bronze after beating Australia 4-3, via CBS.

Despite winning the bronze, Trump spoke out about why he thinks the team couldn’t take home the gold. Want to know what the former president said following the USWNT loss to Canada during the Olympics? Keep reading to find out just exactly who Trump blames for the team losing (it’s always something, right?) and what he has to say about the protests during the Games as well. 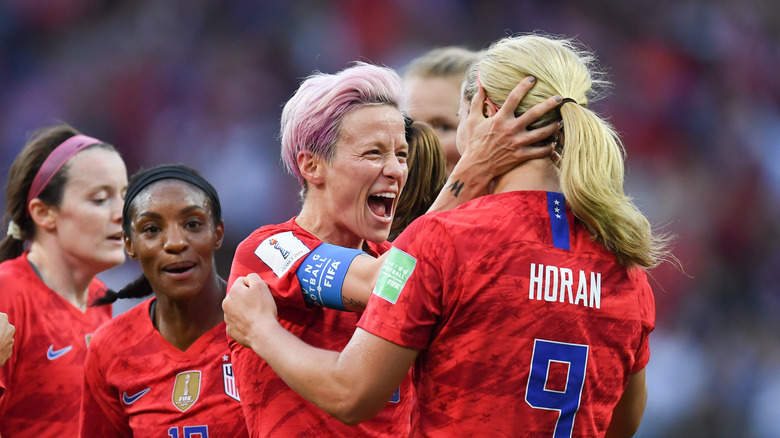 Hoo boy. According to TMZ Sports, Republican and former President Donald Trump went off on the U.S. women’s soccer team, USWNT, and particularly, their most well-known player, Megan Rapinoe. Following USWNT loss to Canada and taking home the bronze in the 2021 Tokyo Olympics, Trump released a statement on August 5, slamming the soccer team. He said, “If our soccer team, headed by a radical group of Leftist Maniacs, wasn’t woke, they would have won the Gold Medal instead of the Bronze.” Adding, “Woke means you lose, everything that is woke goes bad, and our soccer team certainly has.”

Trump also went on to speak about those who kneeled before the Games, saying that the protesters should be booted off the team. He said, “They should replace the wokesters with Patriots and start winning again.” The former president then went off on Rapinoe, saying “The woman with the purple hair played terribly and spends too much time thinking about Radical Left politics and not doing her job!”

According to TMZ, Rapinoe scored 2 goals during the winning match against Australia. So, it’s definitely safe to say that Trump thinks politics are more important than competitive skills or statistics.