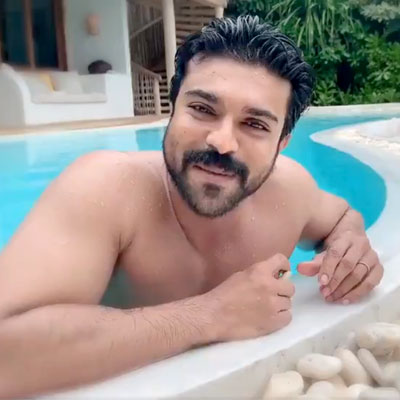 Upasana Kamineni Konidela, is popular for sharing the posts related to Ram Charan, on her Twitter. We can also say that Ram Charan is using his wife Upasana’ twitter for the promotional activities. Yesterday we have reported that Ram Charan made his debut on Instagram and shared a pic of himself. Today once again Upasana confirmed the same by sharing a small video on Twitter and revealed that her hubby is on Instagram now. She captioned it, “FINALLY!!! HE MADE IT #ramcharan On @instagram #itsgonnabeMAD #Friday.” Now the fans are asking when Ram Charan will make his debut on Twitter.

Coming on the video shared by Upasana, Ram Charan is seen chilling in a pool when he made this announcement just for his fans. He is saying, “Hey guys, I’m finally debuting on Instagram. it is going to be amazing connectivity on this new platform. it is new for me, I’m going to have so much of fun. it is going to be mad.” Rangasthalam star will regularly be updating some fun stuff from his personal life and updates from his new film RRR.

Akhil Akkineni, Samantha Akkineni, milky siren Tamannah Bhatia, Kiara Advani and other celebs have welcomed Ram Charan on Instagram. On the work side, Ram Charan is working with Jr NTR and Ram Charan for RRR.