The heavy downpour also left most parts of the city flooded, with water entering houses and damaging properties. 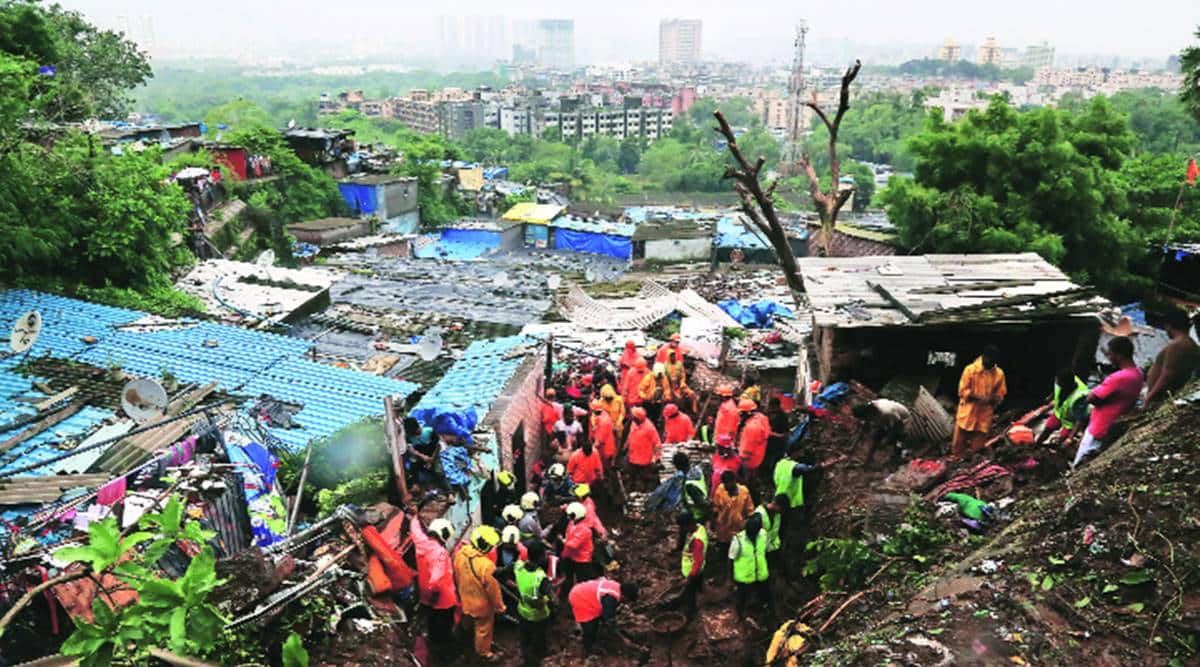 At least 32 people died and eight others were injured in separate incidents caused by intense rainfall in the early hours of Sunday in the central and eastern parts of Mumbai. The heavy downpour also left most parts of the city flooded, with water entering houses and damaging properties.

The India Meteorological Department’s (IMD) Santacruz observatory recorded 235 mm rainfall in 24 hours ending at 8.30 am Sunday, over 200 mm of it was recorded between midnight and 5.30 am.

While 19 people were killed and five were injured at New Bharat Nagar in Chembur’s Vashi Naka after a landslide led to the collapse of a wall and damaged four to five houses. In another incident, a landslide at Surya Nagar in Vikhroli (west) killed 10 people.

Teams of the National Disaster Response Force (NDRF) and Mumbai Fire Brigade continued search and rescue operations at Chembur and Vikhroli, where people were feared trapped under the debris, till late Sunday.

According to the Brihanmumbai Municipal Corporation’s (BMC) Disaster Management Cell, the Chembur landslide was reported between 12.30 am and 1.30 am. Two boundary walls, one constructed by the Bhabha Atomic Research Center (BARC) around its massive complex, and another, a retaining wall built by the Mumbai Housing and Area Development (MHADA) to prevent a landslide, collapsed.

“Water had accumulated in these houses, damaging the electric meter boxes. There was electric current in the water when we reached the spot. Only after the fire brigade came and disconnected the main electric supply did the rescue start. These people may have died due to electrocution,” Nasir Shaikh, a resident of Bharat Nagar, who first reached the spot, said.

Officials from BMC said the landslide could have happened due to heavy downpour. At least two to three people are still trapped under the debris, said an NDRF official, who was a part of the rescue operation in Chembur.

At Vikhroli West, between 2 am and 2.30 am, amid heavy rain, a landslide washed away seven to eight shanties, killing seven people, including three minors and two women in Panchshil chawl at Surya Nagar, a slum pocket built on a hilltop.

Chief Minister Uddhav Thackeray has announced Rs 5 lakh compensation for families of the deceased and free treatment for injured people.

Municipal Commissioner I S Chahal said they have made a temporary arrangement for shifting people from Bharat Nagar in buildings constructed for project-affected people in Mahul as there is a risk of further landslides. “We have identified about 250 people who are in the danger zone. The BMC will move them from a safety point of view. As per the set SOP, the BMC has warned residents about landslides before monsoon,” BMC commissioner I S Chahal told The Indian Express.

He said, “As per the procedure, we will conduct a detailed investigation to find out what has triggered the landslide and wall collapses.”

Meanwhile, in western part of the city, areas like Kandivali, Borivali and Dahisar, witnessed flooding which caused property damages in many chawls and buildings. In Sanjay Gandhi National Park, the forest department’s office and residential quarters of forest officers were damaged due to flooding of Dahisar River.

The Chhatrapati Shivaji Maharaj International Airport (CSMIA) was also temporarily suspended flight operations between 12 42 am to 5.24 am on July 18 as a safety measure. During this time, a total of nine flights were diverted. Flight operations at CSMIA recommenced as per schedule at 5.24 am.

At Juhu airport, too, operations were affected and there was waterlogging inside the airport. The Juhu airport director A K Verma said there were five arrivals and four departures of helicopters belonging to the ONGC.

Meanwhile, power supply to some areas of Mumbai was affected due to the heavy rain.