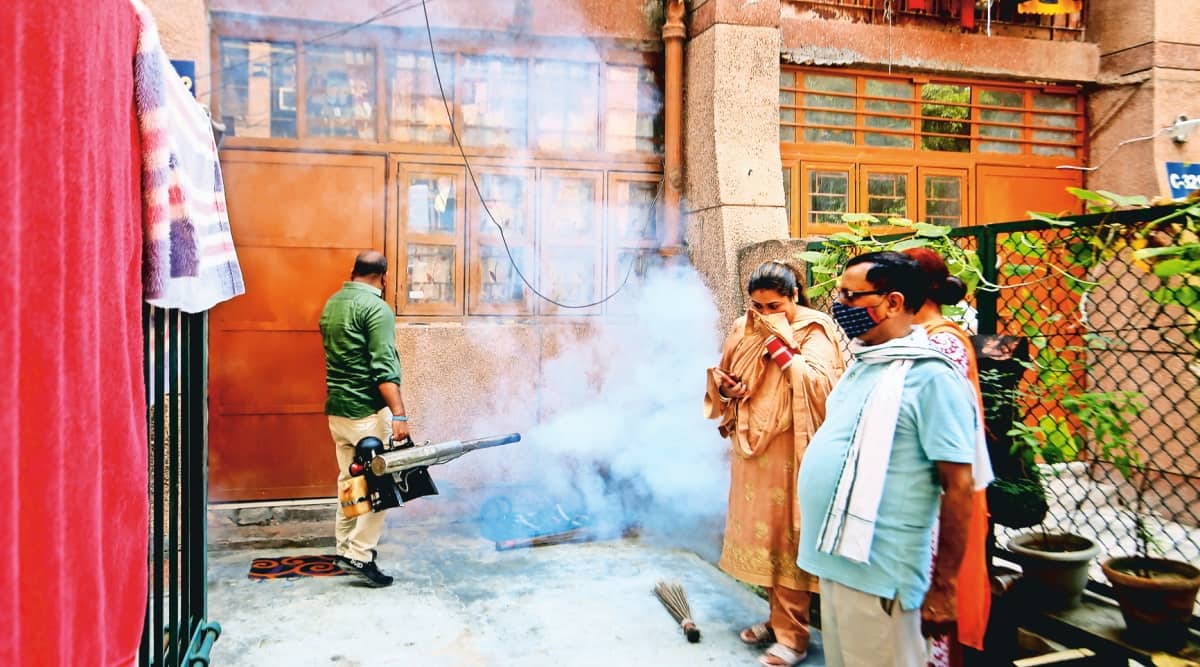 Record rainfall and lax measures to check mosquito breeding appear to be spelling trouble for the capital, which has seen 480 dengue cases so far this year, including 140 over the past week. This is the highest number of dengue cases reported till mid-October in the past three years.

A resident of Mukherjee Nagar’s Munshi Ram Colony, Gulshan Ahiwar, saw his cousin and his neighbour test positive for dengue fever over the past few days. He said the spread is because efforts to control mosquito population and breeding were both insufficient and ineffective.

“Mosquitoes are a menace all day and night. But there has been no fogging or spraying of medicines recently. We haven’t seen anyone so far,” he said.

Doctors across hospitals, seeing fewer and fewer admissions for Covid each day, are now reporting an increase in the number of patients with dengue symptoms.

“There’s a rise in cases from Delhi and surrounding areas this year; the emergency section has seen an uptick. Last year, we only saw Covid cases, barring a few dengue cases here and there. But every couple of years, there is a surge in dengue cases. We have seen about 5 to 10% of cases progressing to serious illness and complications in the form of multi-organ involvement, fluid in the lungs or abdomen, liver swelling or low platelets,” said Dr Atul Gogia, Senior Consultant at the Department of Medicine, Sir Ganga Ram Hospital.

According to data shared by the MCDs, the highest number of cases so far — 141 — have been reported from the South civic body, followed by North and East. Senior officials in the civic body said the corporation had intensified house visits for checking mosquito- borne diseases. This is reflected in the increase in the number of houses being sprayed to control mosquito breeding from 9 lakh last year to 18 lakh this year. Similarly, 2.1 crore visits by domestic breeding checkers have been made to households so far, in comparison to 1.7 crore last year.

Despite this, the number of cases has seen a sharp rise in comparison to the past two years.

The efforts, residents, complained, are not evident on the ground. A few kilometres from Mukherjee Nagar’s Munshi Ram Colony, residents of Timarpur’s Sanjay Basti said they are like forgotten citizens. “Officials come to spray medicines at homes and shops on the main road. They seem to forget the inside lanes,” said Preeti, who goes by only a first name. She has been living in a cluster of small houses that lie cheek-by-jowl along narrow by-lanes inside the basti for 17 years. She pointed to a few drains that carry waste water: some drains are uncovered and clogged with waste and few are covered; some sport broken slabs of stone that were placed over them.

The number of dengue cases usually peaks around the time the monsoon ends, and before the winter begins. The Aedes aegypti mosquito is known to bite during the day time and can feed on multiple people, leading to clusters of infections. Since monsoons receded later than usual this time, officials think the last week of October and November are crucial.

“Usually, we see a cyclical trend with dengue. This could be a viral factor. Or it could be that when we see an upsurge in one year, we try and take adequate precautions the next year to control the vector. Last year, we didn’t see an upsurge in cases,” said Dr Neeraj Nischal, Additional Professor, Department of Medicine, AIIMS.

“Cases of Covid currently have dropped to an extent where we hardly see any Covid-related admissions. But admissions due to acute febrile illness — dengue, malaria, typhoid — are on the rise,” he added.

Both Dr Gogia and Dr Nischal said that while co-infections of Covid and dengue were recorded last year, they have not been seen this year. “There are different strains of dengue and getting infected with one strain doesn’t ensure protection against the others. Usually, one type of strain dominates every year, but this cannot be detected just from the symptoms. From a clinical point of view, the management remains the same, irrespective of the type,” Dr Nischal said. Behind the spike

According to senior officials at the South civic body, while more efforts have been put into controlling the disease this year as compared to the last, external factors such as record rainfall this monsoon, old junked vehicles becoming breeding grounds for mosquitoes, and several people not supporting anti-mosquito drives are also behind the increase.

Old, junked vehicles are receptacles of rain water, which can enter through broken windows and can collect in tyres, officials said. These become ideal breeding grounds.

There are about 4 million “overage” vehicles, both diesel and petrol, deemed deregistered but yet to be taken off the roads in the national capital, as per the Delhi government’s 2019 figures. The MCDs last week gave a fresh push to clear such vehicles, but it is at the initial stage and only around 100 have been taken off roads.

Another grouse is that residents of gated colonies do not allow domestic breeding checkers (DBCs) to enter and issue challans if they find stagnant water in homes or common areas.

“Most gated colonies restrict entry… We should be given the power to challans as well as issue notices to those that do not allow us to enter. Otherwise, we cannot enforce our operations properly,” said a DBC worker in North MCD.

“In Singapore, inspection teams have the power to break into a house, if locked or inaccessible, during peak season to check breeding. In several Western countries, if an outbreak happens, the corporation works on a war footing by zeroing-in on the worst-affected areas,” said a senior civic body official. Delhi saw its worst dengue outbreak in two decades in 2015, when 15,867 cases were reported and 60 people died. This was followed by 9,271 cases and 10 deaths in 2017. Last year, only 1,269 cases were reported. No one died.

Common symptoms of dengue are high fever, pain behind the eyes, rashes and headaches. “A majority of patients have unrelenting high fever for four-five days, along with chills and body aches, which frightens people and makes them get admitted,” Dr Gogia said. Some cases, however, are more complicated.

“A disease like dengue has a strong immunological component. The immune system tries to control the infection. In some patients, the immune system, even after controlling the infection, goes haywire. It keeps on attacking the organs. This immunological phenomenon causes major complications which manifest after the fever starts subsiding. Like any other viral fever, there is no specific treatment, but keeping the patient hydrated is important,” Dr Nischal said.