Locals alleged that the word 'Gurjar' was deliberately omitted from the plaque on a statue of ninth-century king Mihir Bhoj. A mahapanchayat was held on Sunday by members of the Gurjar community against the removal of the word ‘Gurjar’ from the plaque on a statue of ninth-century king Mihir Bhoj, which was unveiled by UP CM Yogi Adityanath on Wednesday.

Locals alleged that the word ‘Gurjar’ was deliberately omitted from the plaque. Community representatives said they wanted to send a ‘message’ to the government through the gathering and added that the omission of the word was an ‘insult’.

“This has now become a matter of honour for the Gurjar community. We cannot be insulted anymore. We have to send a message to the ruling government in a dignified fashion. We are not dependent on any party or organization for our self-respect…We must devise a plan as to how to carry on this fight and to sustain this movement till the errors are rectified. It has hurt us deeply,” said Avtar Singh Badhana, former four-time MP from multiple constituencies under both BJP and Congress, and a Gurjar leader. 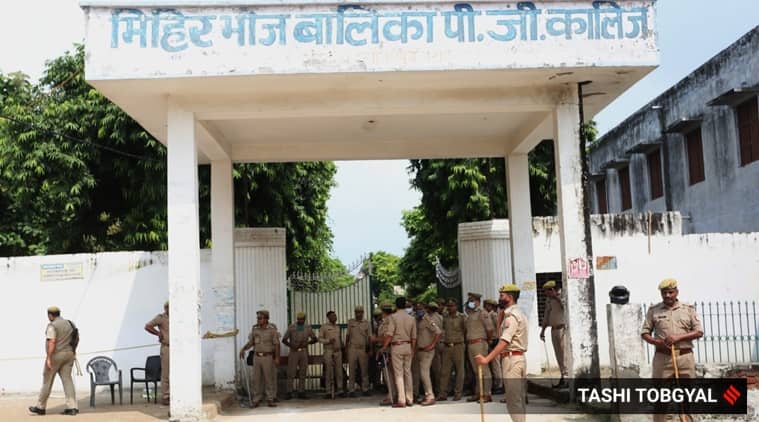 On Wednesday morning, before the CM was supposed to arrive for the statue inauguration ceremony, locals said that some “miscreants” had painted over the Gurjar title ahead of the Mihir Bhoj name on the front plaque of the statue. At a distance, one could see the space for the word Gurjar covered in black. However, in another portion of the statue, a list of donors has been engraved and the title above reads ‘Gurjar Samrat Mihir Bhoj’.

A BJP leader put up a Gurjar sticker on the painted portion which was also later removed, locals said. This triggered a controversy as people in the area began objecting to it once Yogi’s speech was over.

Tensions have been simmering in the region after local Karni Sena members had earlier said that that Mihir Bhoj was a Rajput icon and was being “misappropriated” as a Gurjar leader.

The ninth-century leader Mihir Bhoj had led successful campaigns in Decan, Malwa and Gujarat region. He also led battles against Arab invaders and rulers from Rajasthan.

Prior to Wednesday’s event, some members of the Gurjar and Rajput community entered into a truce and decided to not raise the issue of Bhoj’s lineage.

The omission of the word has made locals feel that the CM has denied Mihir Bhoj his actual legacy. “It seems like the Chief Minister is not Yogi Adityanath but Ajay Bisht. If you are a Yogi, you will not go into the religion or caste of someone and rather give due recognition. With this act, the community has been given a wrong signal. All of us have gathered to plan more protests and make them realise the unity of Gurjar community,” said Sonu Gurjar, convenor of the Rashtriya Gurjar Veer Sena.

Shortly after the CM’s function on Wednesday, a call for Sunday’s mahapanchayat was issued in the college where the statue was unveiled. Heavy police force was deployed ahead of the gathering and the gates to the college and the statue podium were locked by police. The venue was shifted to Shiv Mandir a few metres ahead and a crowd of more than 2,000 people gathered on Sunday afternoon.

From local village leaders to Gurjar organisation members, several speakers addressed the gathering. A mutual decision was taken by the leaders that the government will be given 10 days to restore the Gurjar title. “We will bathe the statue with Ganga jal in case the government does not take any step. It will be a peaceful protest but our anger will be reflected in the upcoming elections since the insult to the community will go a long way,” said Ajay Nagar, an area resident.

More than 100 people were detained by the police as Section 144 was reportedly violated and no permission had been given for the gathering.

“It was a peaceful gathering and heavy force had been deployed at several corners. A few protestors were taken to Police Lines and later released. We will continue to monitor the situation in the region to prevent any law and order situation,” said Vishal Pandey, ADCP of Gautam Buddh Nagar.