Buses headed towards Old Delhi Railway station also registered a sizeable ridership, even around 3.30 pm when the heat had peaked. While passengers boarding these buses were not thermally screened, not more than two were being placed in each row. However, marshals could not be spotted at bus stops. 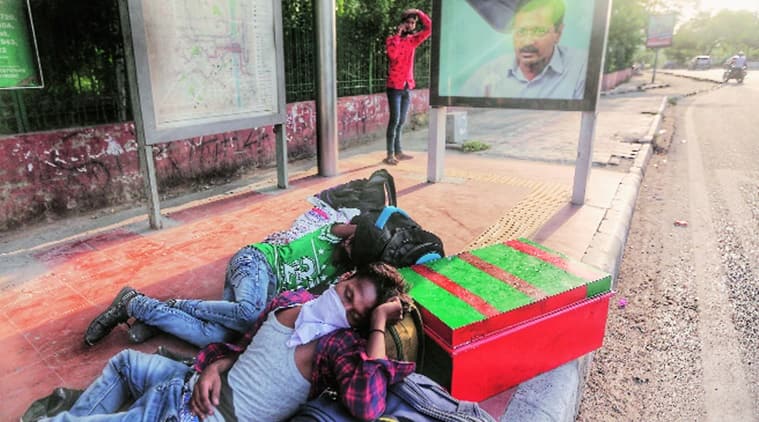 After a nearly two-month hiatus, Delhi’s public transport, including DTC and cluster buses, stuttered to life Tuesday. The number of buses as well as commuters were scant on most routes — except the ones having terminal stops in places bordering Uttar Pradesh, inter-state terminals such as Anand Vihar, and railway stations.

Most buses on these routes had 20 passengers — the ceiling fixed by the city’s transport department to ensure social distancing — indicating that migrants were hoping the vehicles would drop them at a point from where they could take a train or bus back home. Buses headed to terminals such as Mehrauli or Yamuna Vihar, however, were largely empty.

Around 2.30 pm, The Indian Express found several buses destined for Anand Vihar being made to turn away from Sarai Kale Khan, again forcing migrant workers to deboard and head towards the Ghaziabad border on foot.

He, along with a group of six workers, left a shoe making unit at Karol Bagh, where they were employed before the lockdown, and boarded a DTC bus to Anand Vihar, before being asked by traffic police at Sarai Kale Khan.

“We have not been paid for the last two months. So we finally headed out, hoping to catch a train or bus till Begusarai after reaching the UP border,” said Ravinder Yadav, a young member of the group.

On the issue of migrants wanting to go home, Chief Minister Arvind Kejriwal told ABP News: “The system and governments across the board reacted late. We have so far sent migrants back in 59 trains, and 12 more trains are to leave on Tuesday. However, so far around 4 lakh migrants have registered to go back, out of which about 2 lakh each are from UP and Bihar. So, running 10, 12, 15 trains won’t do anymore. I have requested officials in the Union government to run 100, 50 trains a day for the next 4-5 days. We will send back people with proper arrangements, food, social distancing and dignity.”

Deputy CM Manish Sisodia said so far 65,000 migrants have been sent back in Shramik special trains and buses.

Chanchal Kumar, conductor of a cluster bus plying between Mehrauli and Anand Vihar, said traffic police personnel had been turning away buses near Khel Gaon since morning. “What is the point of deploying buses on this route then?” he asked.

Buses headed towards Old Delhi Railway station also registered a sizeable ridership, even around 3.30 pm when the heat had peaked. While passengers boarding these buses were not thermally screened, not more than two were being placed in each row. However, marshals could not be spotted at bus stops.

At the Nehru Place depot, two road inspectors said not more than 30% employees of the department have joined duty as many reside outside Delhi. “They could not enter the city as inter-state movement remains strictly regulated. Services will pick up gradually,” a road inspector said.

Later in the day, the transport department issued an order recalling 350 drivers, who were diverted to the health department earlier this month to drive ambulances, back to the depots.

“Moreover, the 7 pm to 7 am curfew makes no sense now that most restrictions have been lifted. This only makes the job of enforcement agencies tougher. And allowing more time to people will only help space out the crowd,” the official added. The depot was empty, save two buses destined for Yamuna Vihar.

Drivers of several cluster buses said they have not been paid salary over the last two months. Initially, they threatened to strike work, and relented only after being assured of being paid within the next 15 days.

Transport Minister Kailash Gahlot said the department undertook thermal screening of passengers at some depots and queue shelters, and plans are in place to scale up the process over the next few days as more people return to work.

A transport department official said the ridership was a little over 1 lakh on Tuesday.

The daily average ridership in public buses, numbering around 6,000, stands at around 40 lakh in the city, making this mode of transport the largest followed by the Delhi Metro, which carries around 27 lakh people daily. Metro services continue to remain suspended.