Reeman Nain, 24, who helms the women wing of Gurnam Chaduni-led BKU in Hisar district, never tires of being at the forefront, lifting protesters’ spirits with stirring poems and slogans. 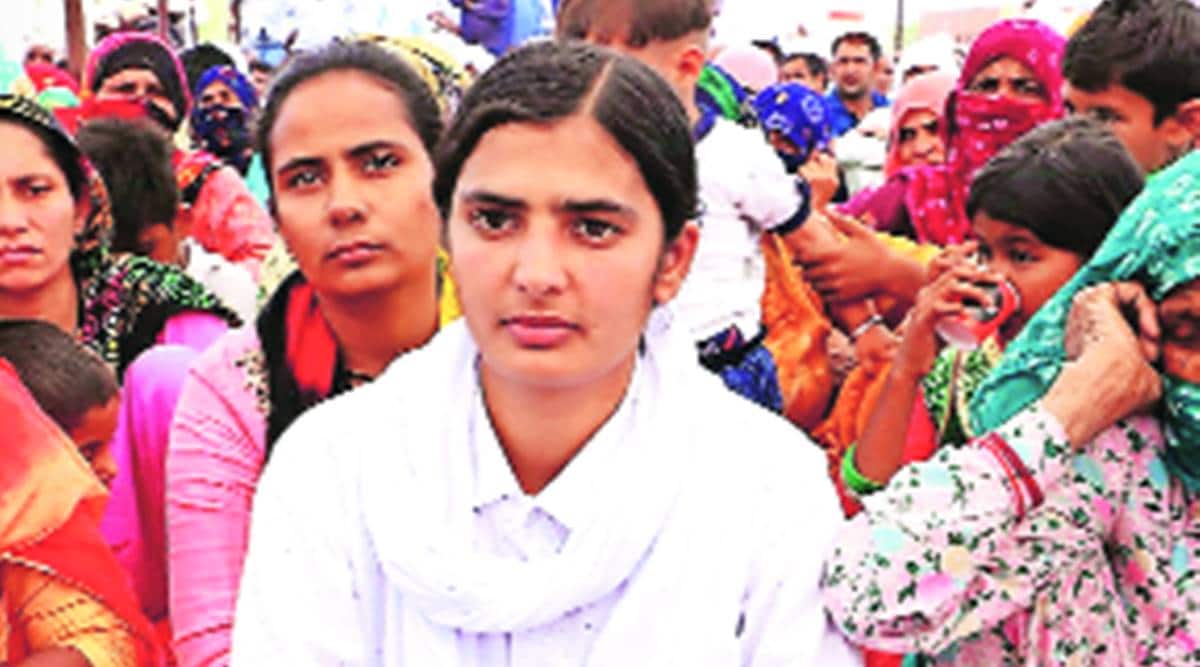 FOR THE past five months, she has been leading a fiery group of women from 58 villages in a dharna against the three farm laws at a toll plaza on Hisar-Chandigarh national highway. Reeman Nain, 24, who helms the women wing of Gurnam Chaduni-led BKU in Hisar district, never tires of being at the forefront, lifting protesters’ spirits with stirring poems and slogans.

On Thursday morning, she was surprised to see her name in local news reports, in a list of protesters booked by police under 11 sections of the IPC, including 307 (attempt to murder), in connection with the May 16 clash at Hisar.
Reeman says, “We just wanted to show black flags to the chief minister but the police had installed barricades to halt our movement.” Police, on their part, claim they did not allow the movement of protesters towards the Covid hospital as “they could have damaged it”.

Born into a marginal farming family of Khedar village with three acres of land, Reeman says she decided to join the agitation when she learnt about the ”adverse impact” of the three farm laws. ”I started educating women about these laws, how they will render us landless, and slowly they began to mark their attendance at the toll plaza.”

The farm agitation, says this youngster, who is pursuing post-graduation in Hindi from Kurukshetra University, has given wings to women in villages. ”It’s given them a chance to come out of their homes in large numbers and interact with their male counterparts. Till now, they were largely limited to their hearth.”

Reeman is confident that these women are now empowered enough to raise their voices whenever they feel they or their families are being wronged. ”They will resist any injustice, they have changed forever,” she declares. At home, her mother Darshana Devi, 42, is her biggest fan. ‘’Be fearless, she always tells me,” says Reeman.

Dressed in a crisp white shirt with pants, Reeman shot to the limelight among the protesters because of her stirring oratory skills. Two months ago, she was named the Hisar district president of the women wing of BKU led by Chaduni during a mahila mahapanchayat at Mayyar toll plaza on Hisar-Delhi National Highway.

Reeman attributes her fiery oratory to her love for poetry. “I have had an abiding interest in poetry since my school days. When I was in class VIII, I used to join a programme of Rohtak Radio Station through phone to share my poems. When I was in calls XII, I started going to the radio station at Rohtak and Hisar Doordarshan to recite my poems on rural, cultural and women’s issues,’’ says the young poetess, who is greatly inspired by AIR senior announcer Sampooran Singh Bagri, anchor of the Balak Mandli programme.

The poetess, who has an elder sister and younger brother, was also known for her athletic prowess in school where she was adjudged the best athlete. The stamina comes handy during the often unpredictable and protracted protests.
Until recently, Reeman was toying with the idea of becoming a teacher. To that end, she even bagged a gold medal in the course for junior teachers from a private college in her village during 2018-20. But she is now no longer sure of what the future holds for her. Asked if she plans to enter politics, and she shrugs. ”Right now we are focused on getting these three laws repealed.”

The feisty youngster is surprised but not perturbed at being booked on various charges, including attempt to murder.

“The FIR can’t suppress our voice, it will further charge the stir. But I am hurt that it was registered despite a compromise between the farmer leaders and administration, which promised that no case will be filed from any side over the clashes.”

The farmer leaders, she says, are feeling cheated.

Police officers claim they had given no such assurance on FIRs. A senior police officer said, “They are misquoting us. It was out of question that no paperwork would be done even after injuries to policemen and damage to our vehicles. They just presumed that no FIR will be lodged. But that was not the case.”

Meanwhile, BKU leader Gurnam Singh Chaduni has called upon farmers of all neighbouring districts to reach Hisar on May 24 to gherao the residence of Hisar divisional Commissioner to protest against the registration of these FIRs. “A large number of women will also join the protest,” says Reeman.