Delhi news live, Delhi Covid news, Delhi weather today: The Delhi Disaster Management Authority (DDMA) has said that Ganesh Chaturthi celebrations will not be allowed in public places in the national capital due to the Covid-19-related restrictions. Delhi News LIVE: Delhi recorded 41 fresh Covid cases and zero fatalities on Wednesday. The positivity rate is currently at 0.05 percent and the number of active infections in the Capital stand at 386. With over 1.7 lakh vaccines administered on Tuesday, Delhi’s present stock of anti-coronavirus vaccines will only last for six days, according to the health bulletin issued on Wednesday.

Meanwhile, over 8 lakh people were booked and Rs 135 cr fine was imposed in the last 4 months for violations of Covid-appropriate behaviour norms. Official data showed that enforcement teams of the city government’s revenue department and the Delhi Police booked over six lakh and two lakh people, respectively, in May-August for violating various Covid-related guidelines like not wearing masks, crowding and spitting in public places.

The Delhi Disaster Management Authority (DDMA) has said that Ganesh Chaturthi celebrations will not be allowed in public places in the national capital due to the Covid-19-related restrictions. In an order issued on Tuesday, the DDMA said that district magistrates and deputy commissioners of police will ensure that idols of Lord Ganesha are not set up in a tent or pandal.

In other news, a new Whatsapp Covid helpline has also been launched for credible Covid-related information, to locate vaccine centres and book slots. According to a government statement, a Whatsapp chatbot will provide telephone consultation and information about oxygen refilling stations as well. People have to send ‘Hi’ +911122307145 on Whatsapp to access the helpdesk, the statement added.

The city is expected to receive light rainfall in several parts during the day and moderate rain is predicted on Friday and over the weekend, the IMD says.

Jamia Millia Islamia student Asif Iqbal Tanha, an accused in the UAPA case alleging a larger conspiracy behind Northeast Delhi violence, Wednesday sought registration of a criminal case and an independent probe into his alleged “confessional statement” and other case documents being leaked to the media.

The submission was made by senior advocate Siddharth Aggarwal before the Delhi High Court. Read more

The decomposed body of former member of Jammu and Kashmir Legislative Council Trilochan Singh Wazir was found in a flat in West Delhi on Thursday.

Police said the 67-year-old leader of the National Conference was inside an apartment at Basai Darapur. Wazir had come to Delhi a few days ago. Deputy Commissioner of Police (West) Urvija Goel said her team received a call at Moti Nagar police station on Thursday morning.

“We reached the spot and found a decomposing body. The man was later identified as Wazir by an acquaintance,” said the DCP. Police said the body was sent for an autopsy to ascertain the reason behind the death.

BJP’s Uttar Pradesh vice president Arvind Kumar Sharma will be reaching out to residents of western UP with public meetings in Noida, Greater Noida and Bulandshahr from Friday.

Sharma, a former IAS officer and a close aide of Prime Minister Narendra Modi, said he will be “actively” working in western UP now. Read more

Banjara market, a popular destination among residents in Gurgaon and Delhi for affordable home decor and furniture items, could close after the Haryana Shahari Vikas Pradhikaran (HSVP) said it has started a demolition drive to clear the land of encroachments.

The market in sector 53 has come up over the last few years, set up by Gadiya Lahors, a nomadic community from Rajasthan, who moved to the city from Chittorgarh. Read more

The chatbot, built on an integrated solution of WhatsApp Business API, is integrated with the Cowin Portal and the Delhi government’s “Covid War Room”. Read more

Haryana Home and Health Minister Anil Vij Wednesday said that India is a democratic country and everyone has the right to protest and raise their voice.

“You cannot stop anyone for that. Whatever their (farmers’) demands are, our officers are talking to them. The talks are ongoing. Any conclusions drawn from the conversation will be communicated,” Vij said, on the ongoing farmers’ agitation. Read more

A 26-year-old woman was allegedly kidnapped and raped in Gurgaon on Tuesday night. When she tried to resist, the accused gave her an intoxicant and assaulted her with a knife, police said.

She suffered minor injuries and is undergoing treatment at a private hospital, where her condition is reported to be stable.

According to the police, the woman worked as a lab technician in the city till recently. She was let go from her job in July. Police said the accused is the director of the lab, where she formerly worked. Read more

The East Delhi Municipal Corporation has appealed to the people to register their pet dogs within two months on the civic body’s authorised online portal or face consequences. The purpose of the exercise is to prepare a database of pet dog owners, control illegal practices like unregistered dog breeding, and also monitor pet vaccination schedules.

A 26-year-old woman was allegedly kidnapped and raped in Gurgaon on Tuesday night. When she tried to resist, the accused gave her an intoxicant and assaulted her with a knife, police said.

She suffered minor injuries and is undergoing treatment at a private hospital, where her condition is reported to be stable.

Ashoka University is building a new campus, adjacent to its existing one in Sonipat, with plans to expand the university’s capacity to 6,000 students by 2027. The university authorities laid the foundation stone for a new 27-acre campus in Sonipat on Wednesday.

It is planned that the new complex, adding 3,500 students to the university, will house six academic buildings, 10 residential buildings, utility and services buildings, and a sports field. The timeline for it to be operational is 2027.

Sarvagya Kumar Srivastava, who was earlier with the Public Works Department, has been appointed the Chairman of SEIAA. The Special Secretary of the Environment Department will be the member secretary. Read more

A resident of Lotus Boulevard society in Noida’s Sector 100 was allegedly assaulted with lathis by security guards after he had a scuffle with one of their colleagues over maintenance and security issues. An FIR was registered, and two security guards have been detained, police said.  Read more

Delhi recorded 41 fresh Covid cases and zero fatalities on Wednesday. The positivity rate is currently at 0.05 percent and the number of active infections in the Capital stand at 386.

Courts can’t presume that all Covid-19 deaths during second wave were due to negligence: SC 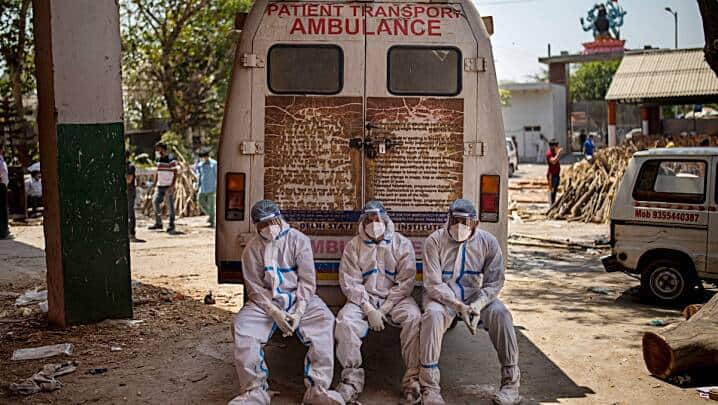 Exhausted workers after carrying the dead at a cremation site in New Delhi during the second Covid wave of Covid-19. (AP/ File)

The Supreme Court on Wednesday said courts cannot presume that all deaths due to COVID-19 in the second wave of the pandemic were due to negligence as it refused to entertain a plea seeking compensation for the kin of the victims by treating it as medical negligence.

A bench of Justices DY Chandrachud, Vikram Nath and Hima Kohli asked the petitioner Deepak Raj Singh to approach the competent authorities with his suggestions.