A month-and-a-half ago, such a scene would have been a far cry in this Naxal-dominated hilly terrain. 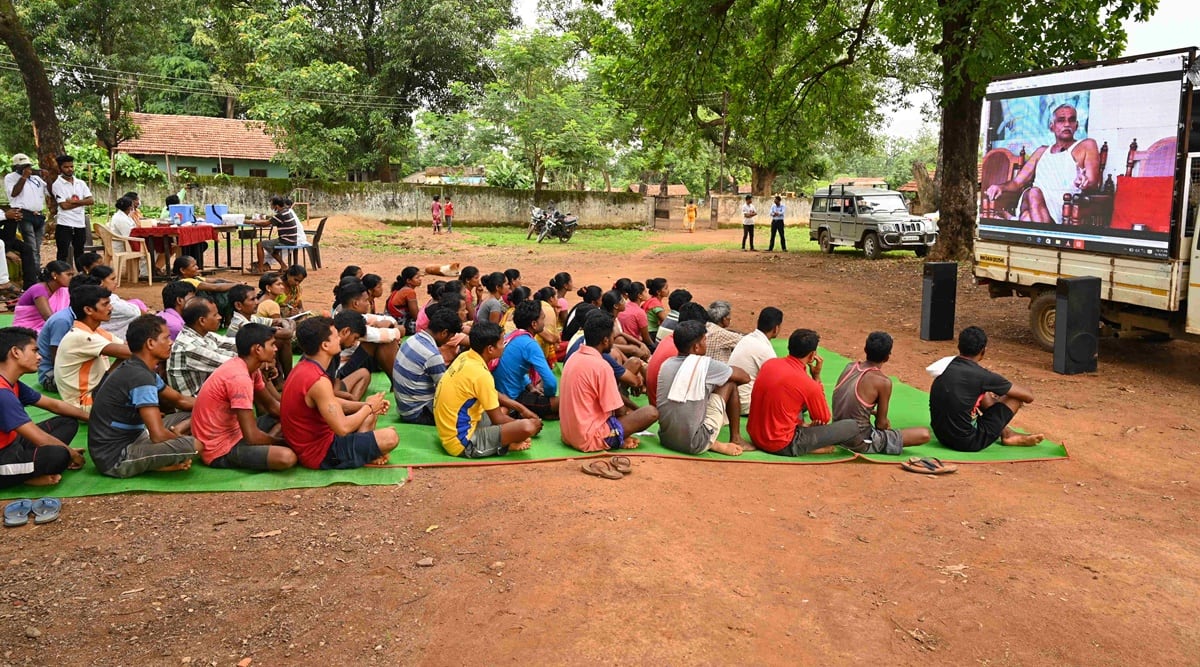 A vehicle rolls in near a huge mattress spread in front of the village choupal. A white screen is hung on the vehicle and an audio system starts blaring music in the Madia language. Soon, people start trickling in even as government staffers set up a table and chairs and the vaccination staff gets ready. Within three hours, more than 100 people receive their jabs.

Mallampodur, a remote village at least 200 km from the district headquarters in Gadchiroli, has not witnessed an event like a Covid vaccination camp as far as the villagers can remember. The residents have mostly participated in police-sponsored jan jagran melawas (awareness rallies) against Naxal influence.

So when a team of government officials arrived here on an overcast Saturday morning in the last week of June, there was no palpable tension.

A month-and-a-half ago, such a scene would have been a far cry in this Naxal-dominated hilly terrain. Nestled several kilometres apart from each other in the thickly wooded interiors of the Abujmad hills, the Madia-Gond tribals, mostly from the Chhota Madia section of the tribe, mistrusted officials and often shunned and sent them away.

The tide has now fully turned thanks to the perseverance and novel approach of officials led by Bhamragad and Etapalli (neighbouring tahsil) project officer of Integrated Tribal Development Project (ITDP), Manuj Singhal.

“What you can see here today is a result of dogged pursuit by my team of naib tahsildar Anmol Kamble and the talathis, kotwals and gram sevaks of 125 villages of the tahsil,” says Singhal, who personally attended many of these camps, including the one at Mallampodur.
Singhal transferred recently to Jalna on promotion as the chief executive officer of Jalna zilla parishad.

Says Kamble, “When we started the campaign at the end of April, we faced hostile villagers in Kospundi and Kudkeli, who sent us away and said they didn’t need the vaccine. There were a lot of misconceptions, such as vaccines causing death, ordinary people and officials receiving different vaccines, it’s part of kidney racket etc. Often, they would ask why they were being vaccinated when there was no Covid in their village. We had a difficult time convincing them. We would trek for more than 20 km to villages like Binagunda, Kuwakodi and Fodewada up on the Abujmad hills only to be ignored.”

The administration then thought of a different strategy. A film in Madia language was made, scripted by Chichoda village Talathi Sachin Kannake and directed by Yechli village Talathi Rayalu Talandi.

It featured messages by local zilla parishad and panchayat samiti members, community leaders and social activist Prakash Amte, whose Lok Biradari Prakalp at Hemalkasa village is providing several basic services like health and education to local tribals for the past 50 years.

Teams comprising heads of various other government departments were constituted at village and tahsil levels to conduct a dialogue with local villagers. Since many of them are in regular touch with villagers, their words held a lot of credibility.

The methods had the desired impact. Bhamragad’s vaccination drive has now well and truly taken off with greater success than many places across the country.

“The 18 to 45 category vaccination began 10 days ago. So far, 141 people in this category have been vaccinated,” Kamble says, adding, “Overall, 1,191 people have received both doses.”

At Mallampodur, 335 of the 638 residents have been vaccinated.

What makes the Mallampodur success significant is that no Covid cases have been reported here till now. “We haven’t had a single Covid patient yet,” says Gajanan Bhandekar, a resident of mallampodur who is in the 45-plus category.

Asked how he realised the seriousness of the disease despite being so far away from its impact, he says, “The government has explained it to us. Now, we have no doubts about the campaign.”

Says 25-year old Manjusha Dhurve, an Arts graduate, “My mother took the jab previously. I have taken it today. I am convinced about its utility and I’m sure it helps in preventing death due to Covid.”

There are many other villages like Mallampodur that have no Covid cases but have realised the seriousness of the disease and cooperated with the vaccination drive.

Singhal also attributes the success to police making inroads in the Naxal heartlands. “In 2009, 17 policemen were killed in a Maoist ambush at the nearby Lahiri village. The police has since come a long way and managed to hold sway over places that were out of its control till a few years ago. That has helped the vaccination drive, too, like several other government initiatives.”