The Modi-led government has been observing Patel’s birth anniversary as ‘Ekta Diwas’ or National Unity Day since 2014. 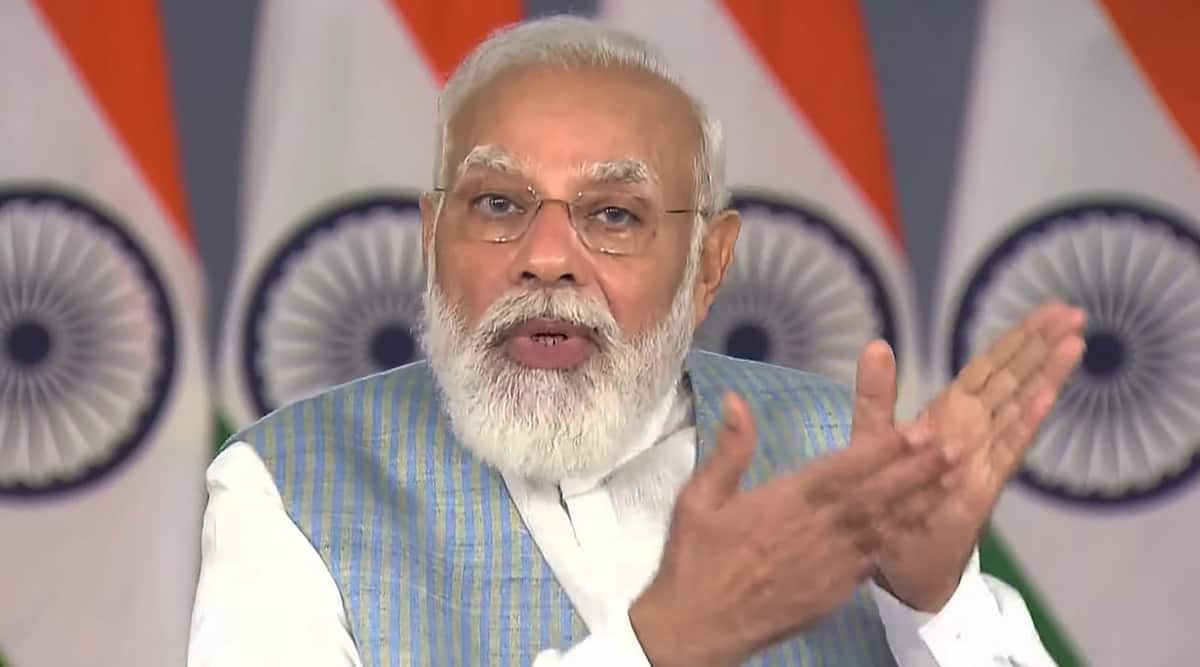 Prime Minister Narendra Modi, in his virtual address on the occasion of the ‘Rashtriya Ekta Diwas’ or National Unity Day, said that the country has got freedom from age-old laws in the last seven years.

Celebrations were organised at Statue of Unity in Kevadia on Sunday on the birth anniversary of Sardar Vallabhai Patel.

“In the last seven years, the country has got freedom from all the decades-old hereditary laws. It has led to uniting India. Be it Jammu and Kashmir, the North East or a village in the Himalayas, every part of the country is heading towards development today,” the Prime Minister said. He added, “However, we must always remember that the passengers of a boat have to take care of the boat as well.”

The celebrations were presided over by Union Home Minister Amit Shah. An “Ekta Parade” was organised, which included police jawans and personnel from the Border Security Force, ITBP, CISF and CRPF from across the country.

Invoking Sardar Patel’s slogan of a united India, Modi said, “Sardar Sahab would see India as a living entity. That is why his idea of one India meant equal opportunities and a right to dream alike for the people. As such, we need to build a nation where women should have equal opportunities, the Dalits, underprivileged, tribals and every citizen of the country should feel equal. There should be no discrimination in facilities like electricity and water. This is what India is doing today.”

He added, “India is not only a geographical entity but a country full of ideals, culture and concepts — the land where more than 130 crore people live.”

Speaking about the ongoing infrastructural developments in the country, the Prime Minister stated: “Projects are on to cut down geographical distances. How will people understand the culture of another region if they have to think a hundred times before reaching from one corner to another? As such, we are setting up projects that will cut down this distance and help our unity grow.”

Speaking about farmers, Modi said, “Our co-operative organisations, too, strengthen our small farmers. The more we focus on small farmers and come out to help them grow, the more we’ll be able to win their trust.”

Stressing on the importance of building a self-reliant India, Modi said that during the time of the pandemic, the country saw phenomenal results as every person contributed towards the betterment of the nation. “From 100-crore vaccines to setting up of new hospitals, all of it was possible because of the involvement of every citizen of the country,” he added.

Taking the Prime Minister’s point forward, Amit Shah said that it was Sardar Sahab who strengthened the voice of farmers and laid the foundation of cooperation in the country during the Independence movement. He also stressed on the contribution of every citizen towards the country’s development.

“This ‘Azadi ka Amrit Mahotsav’ year is also a year for us to pledge. Imagine, a small child takes a pledge that he will not waste food, that will benefit the country in a big way. These pledges will be effective in taking the country forward,” the Union Home Minister added.

Saying that the day also reminds us of the freedom struggle between 1857 and 1947, he said, “This day has great significance for all of us. Sardar Sahab, after Independence, was given the huge task of uniting the nation as the British had divided the country into India, Pakistan and 550 other princely states. And it is on his birth anniversary that we should pledge to keep India united forever.”

He added, “Kevadia has turned into a site of national solidarity and unity. The statue of Sardar Patel sends out a message to the entire world that India’s future is bright and no one can break the unity of the country.” Saying that there were attempts made by many to wash away his contributions, the Union Home Minister said that the present government has stopped such efforts and has conferred the Bharat Ratna and built a statue as a sign of respect towards him.

“PM Modi has dedicated these 7 years to the 60 crore poor people of India. For 70 years since Independence, they never found themselves at the centre of development. But now, things have changed. They have electricity, toilets, gas cylinders, drinking water and health cards,” Shah added.

Several sportspersons who have won medals at the Olympics, Commonwealth Games and Asian Games were part of the celebrations. Two school bands — St Mary’s School in Naroda, Ahmedabad, and St Xavier’s School in Jamnagar —also participated in the parade.

A dance group from Ganjam in Odisha presented an act depicting the Independence struggle.

Tributes Pour In From Across Country

In a tweet in Hindi, President Ram Nath Kovind paid his tribute to Patel and said, “My humble tributes on the birth anniversary of Iron Man Sardar Vallabhbhai Patel. A symbol of the unity of the country, Sardar Patel occupies a high place among our foremost nation builders. The countrymen will always be indebted to Sardar Patel for establishing a work culture based on morality and service to the nation.”

Congress leader Rahul Gandhi paid tributes to Patel and said that at a time when all the pillars of democracy are being “weakened”, it is important to remember Patel’s contribution.

“Today, when all the pillars of our democracy are being weakened, we have to remember the contribution of Sardar Vallabhbhai Patel. He was also an important voice among the Congress leaders who built these pillars,” Rahul Gandhi said in a tweet in Hindi.

Congress general secretary Priyanka Gandhi Vadra remembered Patel’s contribution to the cause of farmers, saying his struggle “inspires us to stand like a rock in the fight for justice against the oppression of the farmers”.

Tweeting in Hindi, Home Minister Amit Shah wrote: “Sardar Patel’s dedication, loyalty, struggle and sacrifice for the motherland inspires every Indian to dedicate himself for the unity and integrity of the country.”

Paying his respects at the ‘Statue of Unity’ in Kevadiya, Shah said, “Kevadia is not just the name of a place, it has become a shrine – a shrine of national unity, of patriotism. This sky-high statue of #SardarPatel is giving a message to the world that India’s future is bright, that nobody can damage the unity & integrity of India.” The home minister also pledged an oath of national unity during the function.

Defence Minister Rajnath Singh also tweeted and wrote: “Sardar Vallabhbhai Patel, a hero who united the country in the thread of unity, will always be remembered for his role in liberating India and his decisive leadership. He has also contributed a lot for the construction of New India. I bow to him on the occasion of his birth anniversary.”

The Modi-led government has been observing Patel’s birth anniversary as ‘Ekta Diwas’ or National Unity Day since 2014. Born on October 31, 1875, at Nadiad in Gujarat, Patel was India’s first Home Minister who is credited for the merger of over 560 states into the Union of India.