A feeling is growing among the agitator farmers that the BJP-JJP leaders, “who had restricted their movements following the warning of agitators, are now trying to increase their activities after the imposition of Covid restrictions”. 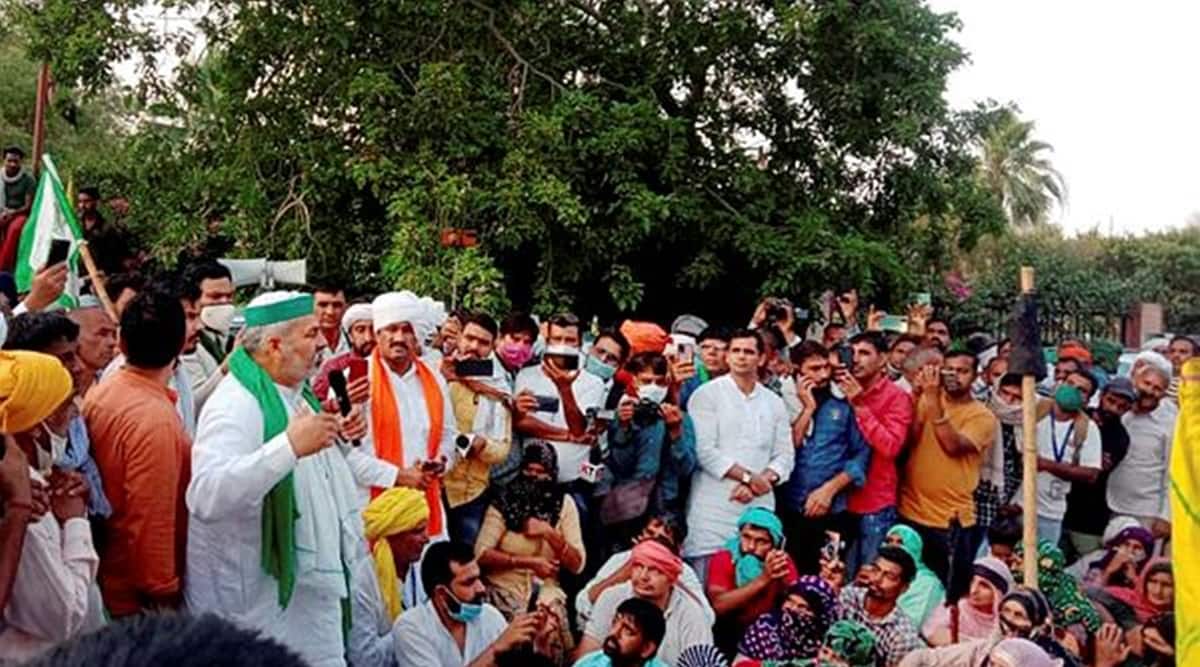 Hisar, which witnessed clashes between farmers and policemen Sunday over the visit of CM Manohar Lal Khattar, has emerged as the new epicentre of farmers’ agitation in Haryana.

When the protest against Centre’s three farm laws had started a few months back, Kuruksehtra district was at its core in the state with overwhelming support from neighbouring districts like Yamunanagar, Ambala and Karnal.

Lately, Jind, which falls in the centre of the state, made headlines with major protests by farmers, especially big kisan panchayats in early days of February.

However, over the last two months, Hisar, which is nearly 150 km from Delhi, has seen increased protests by farmers especially against the visits of BJP-JJP leaders.

In April, the road blockade by farmers had forced Deputy Chief Minister Dushyant Chautala to take an aerial route to cover just eight km distance to Hisar town from the local airport. Similarly, hundreds of farmers staged a strong protest against the visit of Khattar Sunday. “The latest Hisar incident has apparently given a new energy to the farmer agitation despite a Covid lockdown and spread of the pandemic,” says a Hisar-based political observer Rishi Saini. The Hisar incident has taken place at a time when the spread of Covid-19 in rural areas had drawn the maximum attention of villagers to the pandemic. The Hisar incident has again brought the farmer agitation in centre of their discussions.

Currently, four toll plazas in Hisar district have become a focal point for the mobilisation of agitator farmers where they visit daily. The Indian Express has learnt that the farmers from neighbouring villages go to these toll plazas in rotation with a mindset that the agitation may go on for months and even for a few years. There are also reports of formation of committees of farmers at village level.

Saini recalls how the farmers of Hisar had fought a long and successful battle demanding pakke khale (minor irrigation canals) in 1980 adding the agitation had later spread to areas of Bhiwani too. Even during the past couple of years, the farmers have been launching agitation at local level in Hisar district especially over the issue of compensation to their damaged crops mainly because of natural calamities and diseases.

Not only Hisar, even its neighbouring districts like Fatehabad, Sirsa and Bhiwani too are witnessing active participation of farmers in the agitation. Political observers believe that the visits of top leaders of BJP-JJP who are facing flank from farmers over three farm laws, have often “charged” the agitation as these visits have given chance to the farmers to consolidate their strength against the “might of ruling dispensation”.

A feeling is growing among the agitator farmers that the BJP-JJP leaders, “who had restricted their movements following the warning of agitators, are now trying to increase their activities after the imposition of Covid restrictions”.

However, the leaders of BJP-JJP insist that their visits are meant to review the arrangements being done to tackle the Covid pandemic.

A farmer leader, Vikas Sisar, said, “Even since the beginning of farmers’ agitation, Hisar has seen a considerable participation in the dharnas at Delhi borders and at toll plazas on national highways. Their strength becomes more apparent whenever any leader of BJP-JJP comes to the district and farmers come on roads to stage protest against them.”

The farmers have announced a “social boycott” of BJP-JJP leaders to express their anguish over the issue of three farm laws terming the same as “anti-farmer, anti-poor”.

The BJP has termed the allegations baseless alleging the hands of the Congress and the Left behind the agitation.

All India Kisan Sabha (AIKS)’s Haryana unit secretary Dayanand Poonia said, “After strong protest against CM’s visit on Sunday, Hisar has become a big centre of the farmers’ agitation. The visits of BJP-JJP give an opportunity to the farmers to stage protests against them unitedly.”

Politically, the leaders of the BJP-JJP want to appear active in the area as both parties had secured top two slots in the 2019 Lok Sabha polls when Dushyant Chautala of JJP had given a tough fight to BJP’s Brijendra Singh even when “there was a Modi wave”.

Finally, Brijendra Singh had won the poll battle while Congress leader Kuldeep Bishnoi’s son, Bhavya Bishnoi, had secured third place. In the past, Hisar has been a stronghold of the Bishnoi family being their hometown and especially when Bhajan Lal was the CM. Even now, the Bishnoi family has a considerable support base in Hisar district.