Fatima Sheikh-Savitri Bai Phule Library, just about 50 metres from the main protest site of Shaheen Bagh, is giving protesters another way to register their stir apart from sloganeering. 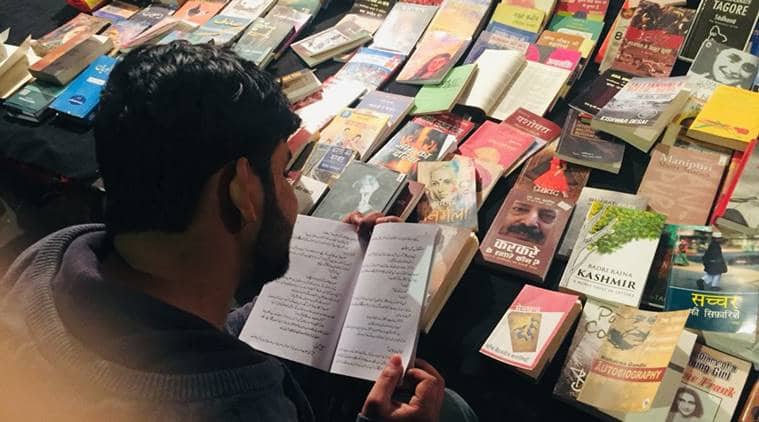 A twenty-something lad sits quiet with George Orwell’s Animal Farm in his hand just about 50 metres from the Shaheen Bagh protest site. Engrossed in the allegory that addresses the issue of creating equal and free space for all, he seems to be completely cut off from his not-so-quiet surrounding — where protesters demanding equal rights to citizenship are raising slogans like ‘Kaagaz nahi dikhayenge’, ‘Inquilaab Zindabad’ with occasional breaks at the sound of azan from a nearby mosque.

However, he isn’t alone. There are many like him — of different ages, some reading, some taking notes from specific books, and others running their eyes through the covers of the books that are displayed at Shaheen Bagh’s bus stand-turned-library. 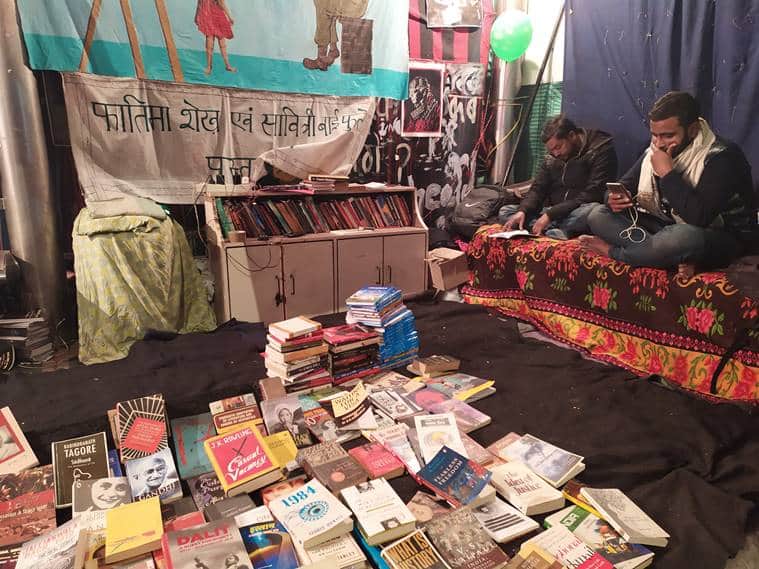 “It all started after the violence in Jamia in December last year,” says Satya Prakash, one of the organisers and also a Masters student in Jamia Millia Islamia University. According to him, the series of events that followed including protests, alleged police brutalities on protesters and students on various campuses, led them to think of “doing something”.

“Locals, specifically women, here started protesting, and we as students used to come here to lend our support. Then the JNU incident happened on January 5. There were also repeated attempts to malign the movement in Shaheen Bagh saying the protesters here are paid to stage agitation. So, we started looking for a way to contribute our capacities to the movement here, and that is when Asif Bhai came up with the idea,” the student of Modern History says.

Mohammad Asif, whom he refers to, was a student of Aligarh Muslim University, and is at present in Delhi working on his doctoral research proposal. 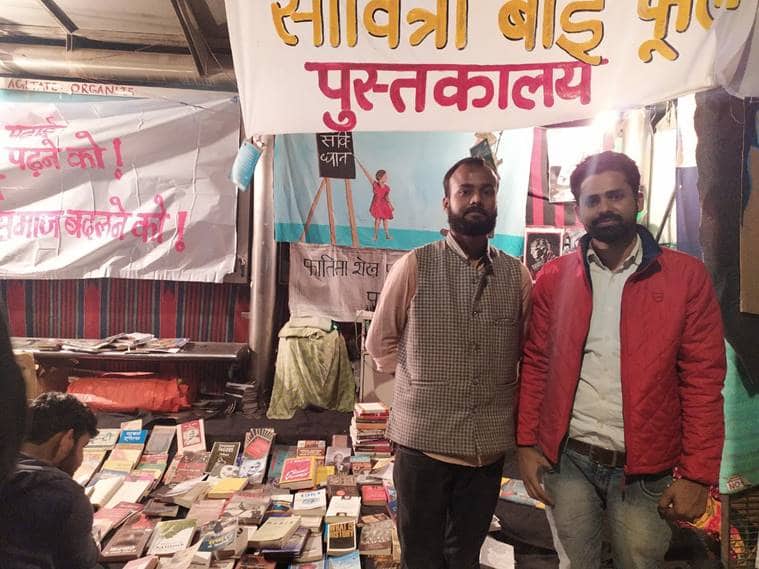 It was January 17, the death anniversary of Rohith Vemula, when the organisers, including Satya, Asif, Noor, brought in their own books — a bunch of 30-35 — and placed them on display at the Shaheen Bagh bus stand under the banner of Fatima Sheikh-Savitri Bai Phule Library. A placard asking people to ‘donate books’ and a Facebook page have however helped surge the number of books to more than 500, even before the service completed a month of its existence.

Hinting that the protest there is a consolidated one against any kind of inequality, Satya says, “As students, we chose the date to commemorate Rohith’s suicide — (which we consider) an institutional murder of a student on the basis of caste.” The library has been named after two social reformers — both women — to respect the fact that the protest at Shaheen Bagh is also being led and carried forward by women, he says. And this buys the women readers here an exemption: While the library doesn’t allow men to borrow books (they can sit and read them there for hours), women can take them home for 24 hours, by submitting their contact details to the organisers. 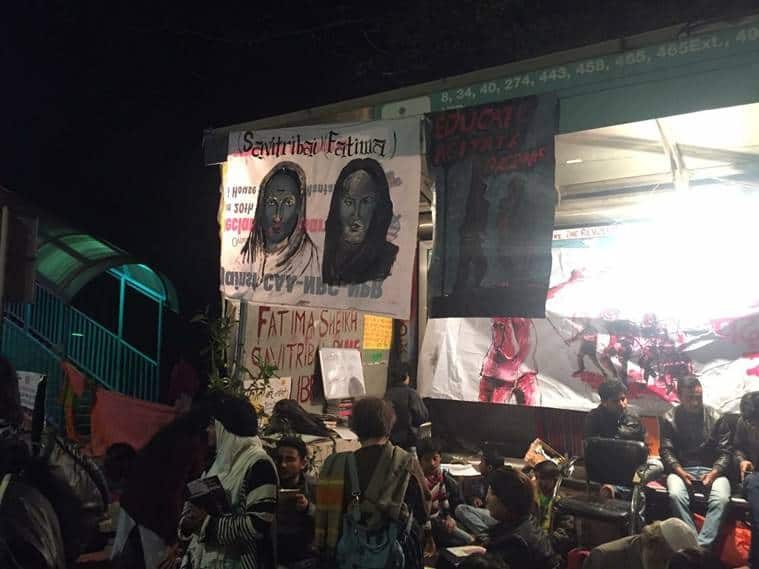 Looking at the collection of the library, one can spot books ranging from Anne Frank’s ‘Diary of a Young Girl’, J K Rowling’s ‘The Casual Vacancy’ to life stories of Karl Marx, Bhagat Singh and Khushwant Singh’s ‘End of India’. When asked if they are only accepting books that are related to politics and revolution, Satya clarifies there’s no such specification. “We even get 10th standard textbooks, and those facilitating the students preparing for various entrance examinations. However, we had to filter them out for the time being because of the space crunch. We are displaying those which are relevant to this place’s ambience, those which will interest people coming here,” he adds.

Just as artists have kept the streets and walls of Shaheen Bagh and Jamia talking revolution, they have also lent their creative hands in decking up this library. The artworks on vinyl, banners, and posters that have covered up all the pillars of the once bus stand, hence speak volumes how books i.e. education is instrumental in building dissent.

“We want people, who come to Shaheen Bagh to protest and hang around for even half an hour, draw insight from this library. We are giving them another way to register their protest apart from sloganeering,” Satya says, adding that this library was an antidote to the allegation that all the noise here is “disguised”.

“This library shows that this is not true. They come, and read here too,” he insists. 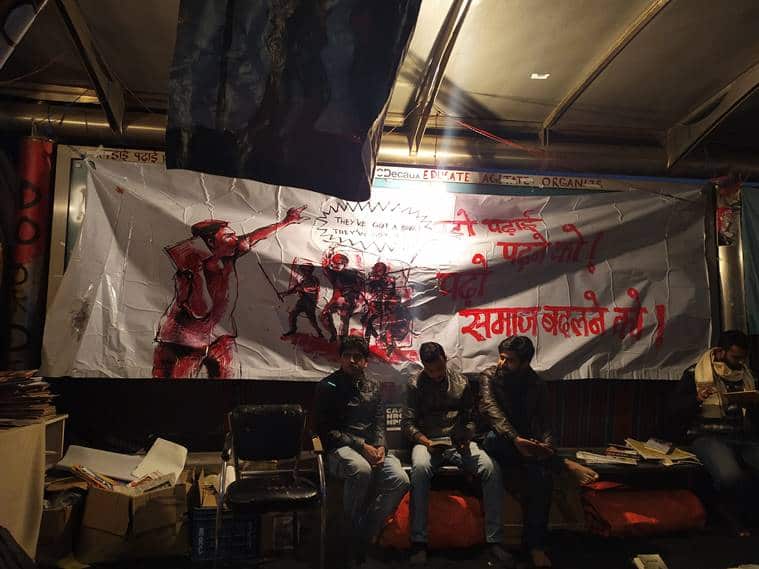 Just as the regular protesters, there are some readers who come here daily. One of them is Afzal Ansari who has been visiting the library since February 2. A first-year Jamia student, Ansari was injured during the violence in Jamia. “My parents had called me back home after this,” he says, showing his wrist that is still recovering. “But when I returned for my semesters and visited the protest site, I got to know about this library,” he beams. Since then, he has been coming here regularly except the days before his exams. “My exams got over yesterday (Tuesday), and I am here from 2 pm today,” he says when it was almost 6.30 in the evening. He now aims to finish reading ‘Caste Matters’ by Suraj Yengde.

Satya says to ensure that the “movement” they have started with the library does not fall “static”, they have very recently started lecture sessions that have already featured personalities like activist Kavita Krishnan and historian Sohail Hashmi. Though books add wisdom to any movement, Satya rues that negative discourse is being weaved around education nowadays. “That educated people understand more, and defy more is the new narrative. They are tagged urban Naxals,” he says. Unsure of the library’s future, he says, they as organisers will always try to hold high Bhagat Singh’s quote: “Bombs and pistols do not make a revolution. The sword of revolution is sharpened on the whetting-stone of ideas.”