Accompanied by Chief Minister Yogi Adityanath and his ministers, SP rebel MLA from Hardoi Nitin Agrawal, who has been keeping distance with his party since 2019, on Sunday filed his nomination papers. 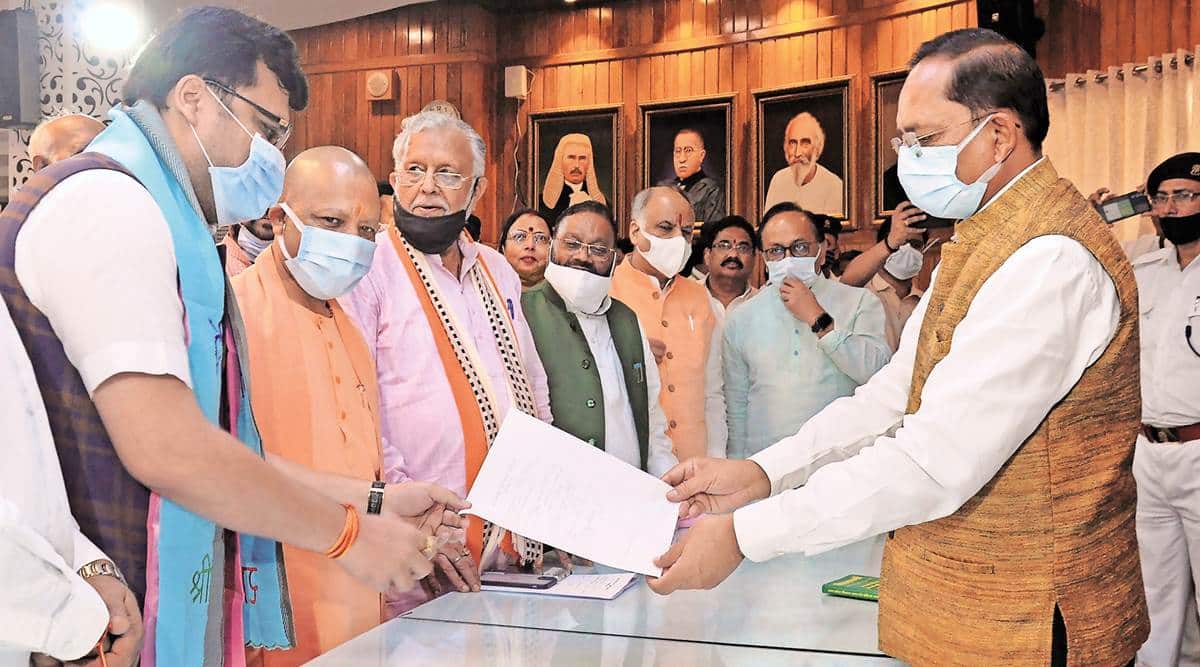 With two Samajwadi Party (SP) MLAs, one supported by the ruling BJP, in the fray for the UP Assembly Deputy Speaker’s post, the SP on Sunday termed the saffron party’s move “undemocratic”, arguing that usually, a legislator from the biggest Opposition party is elected unopposed to the post.

Accompanied by Chief Minister Yogi Adityanath and his ministers, SP rebel MLA from Hardoi Nitin Agrawal, who has been keeping distance with his party since 2019, on Sunday filed his nomination papers.

The SP fielded its Sitapur legislator Narendra Verma, who submitted his nomination papers in presence of Leader of Opposition in the Assembly Ram Govind Chaudhary, other SP MLAs and some BSP rebel leaders the same day.

First in 14 years, the election will be held on Monday during the single-day session of the Assembly.

With help of 304 BJP MLAs in the 403-member Assembly, Agrawal is tipped to become the next Deputy Speaker. The SP is banking on rebel MLAs to support six-time MLA Verma.

The Assembly Speaker recently rejected an SP application to disqualify Agrawal from the House. In 2019, Agrawal had defied his party whip against attending a special Assembly session.

Refuting Opposition’s allegations, Adityanath said the BJP respected “parliamentary traditions” and that was why the candidate was chosen from the biggest Opposition party.

SP’s Chaudhary said, “Ever since this Vidhan Sabha was formed, it has been a tradition that the deputy speaker is from the biggest Opposition party. But the Bharatiya Janata Party does not believe in parliamentary traditions, democracy or even the Constitution… That is why they have silently decided to call this session and then announce a candidate without consulting Opposition.” He again questioned “the logic of having a deputy speaker now” when the Assembly elections were around the corner.

Agrawal, whose father Naresh Agrawal joined the BJP before the 2019 Lok Sabha elections, was also supported by a Congress and a BSP MLA.

“The SP should not talk about traditions. They were the ones who decided to boycott the session (in 2019) dedicated to Mahatma Gandhi. They should learn to respect the traditions as they should know that it is a constitutional post, which gets support from all…a name from the Opposition is proposed by the Leader of the House and the Opposition supports it,” Nitin Agrawal said. He said he had applied for a constitutional post as an MLA with no allegiance to any party.