The 28-year-old popular Punjabi rapper, who joined Congress Friday, has been mired in a string of controversies and police cases, especially for flaunting guns and 'promoting' gun culture 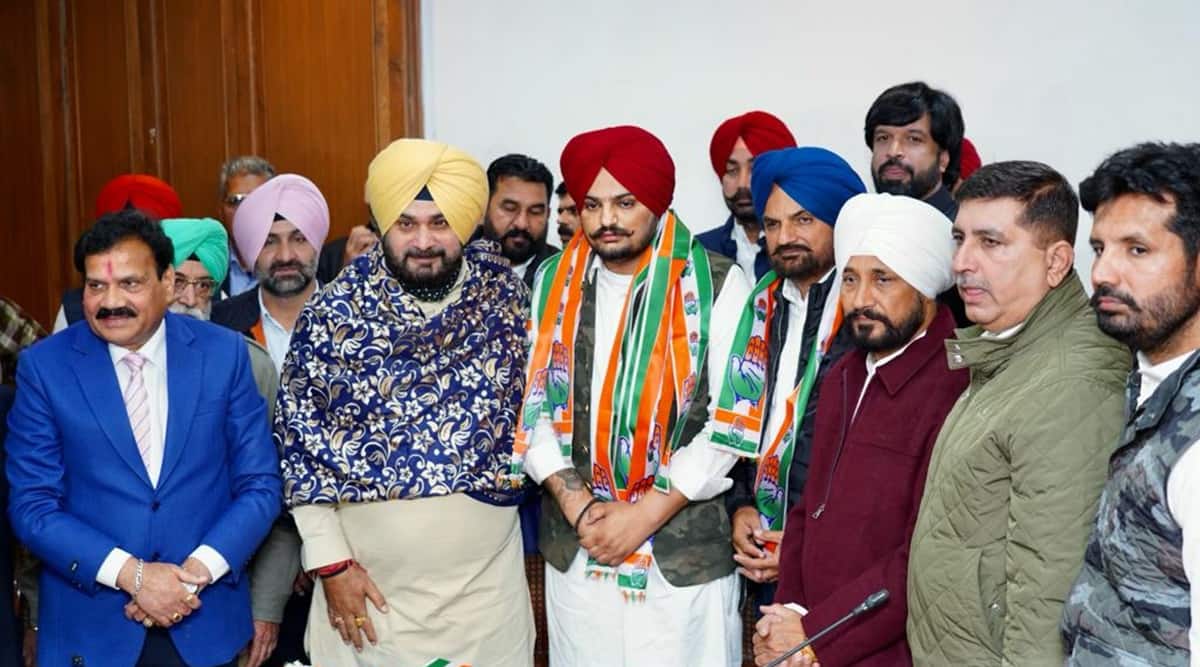 Popular Punjabi singer, lyricist and actor, Sidhu Moosewala, who joined the ruling Congress party today barely a couple of months before the Punjab Assembly polls, has millions of fans across the country and overseas.

The 28-year-old controversial rapper, who sings in the Punjabi language, joined the Congress in Chandigarh in the presence of Chief Minister Charanjit Singh Channi and state party chief Navjot Singh Sidhu.

After launching his political role, Moosewala said he had started composing music four years ago but was now going to take a new step in his life. “I still Iive in the same house in my village. My father is an ex-serviceman and my mother is a sarpanch. Residents of my area, Bathinda and Mansa, are associated with me. They have expectations from me.“

Moosewala is set to be fielded by the Congress as its candidate from Mansa in the upcoming polls.

Both Channi and Sidhu hailed Moosewala as a “youth icon”. Channi called it a “big day” in Punjab politics, describing him as one “who knows youth sentiments and who gives a direction to them”.

Moosewala, whose real name is Shubhdeep Singh Sidhu, has courted controversies and police cases by flaunting guns and “promoting” gun culture in his songs.

On May 4, 2020, his two videos flaunting guns went viral. In one of them, he was training with an AK-47 gun, with the video also featuring police officers. Subsequently, six cops were suspended and the singer was booked under Arms Act by the Barnala police. In July 2020, he got a regular bail and later joined investigations. He was even fined for using black tinted glasses in Nabha in June but was released.

Moosewala was caught up in another controversy when he released his song “Sanju” in July 2020 in which he stated that FIRs lodged against him were “badges of honour” for him. Olympian shooter Avneet Kaur Sidhu had criticised him for his songs.

In December 2020, he again landed in another controversy with his song “Panjab” in which he glorified Khalistan separatist Jarnail Singh Bhindrawale. He triggered yet another row in

March, 2020 when he released a song “Gwacheya Gurbaksh” in which he claimed how Gurbaksh Singh, who came from Italy and became the first Covid fatality in Punjab, had become a “super spreader”. His song was even promoted by Punjab police.

Moosewala was also involved in a conflict with singer Karan Aujla . In September 2019, he landed in fresh trouble for inappropriately using “Mai Bhago” ( legendary Sikh woman who led 40 Sikh soldiers in fight against Mughals) in his song. Later, he himself apologised on social media and even appeared before Akal Takht in March 2020.

On the issue of farmers’ agitation against the Centre’s agriculture laws, Moosewala was the first Punjabi singer to come out openly in their support on September 25 when they gave a call for Bharat Bandh with Punjab being its epicentre. He participated in a bandh call event in Mansa and later attended many farmers’ functions in support of their cause.

One of the highest paid Punjabi singers, Moosewala hails from a farmer’s family from the Moose wala village of the Mansa district in Punjab. An electrical engineer by training, he graduated in 2016 from Ludhiana’s Guru Nanak Dev Engineering College.

Moosewala then went to Canada where his first song was released in early 2017. He started singing which was his passion since his childhood. He released his first song “G Wagon”, and gained public attention with his track “So High” in 2018. His debut album “PBX1” was at 66th rank on the Billboard Canadian Albums chart. His single “47” was ranked on UK singles chart. His “Bambiha Bole” song entered the top 5 on global YouTube music chart. In 2021, he also released Moosetape tracks which too gained popularity globally. He performs in India as well as in many countries. He has sung a song along with Justin Bieber and Drake, too. He has also officially launched his record label, “5911 records”.

His father Bhola Singh is a retired government employee and a farmer while his mother Charan Kaur is the sarpanch of their village.

During the Covid lockdown, Moosewala was seen urging people to stay indoors. His pictures were on banners in many villages of Punjab that showed him appealing to people to observe lockdown.

Moosewala has also appeared in few Punjabi movies. Ahead of joining the Congress, he released his latest number “Satisfy” in which he sings that whatever God has given to him, he is satisfied with it.