Farmers had ended the protest only after an assurance from the administration that the FIR will be withdrawn preferably within a month following due legal process. 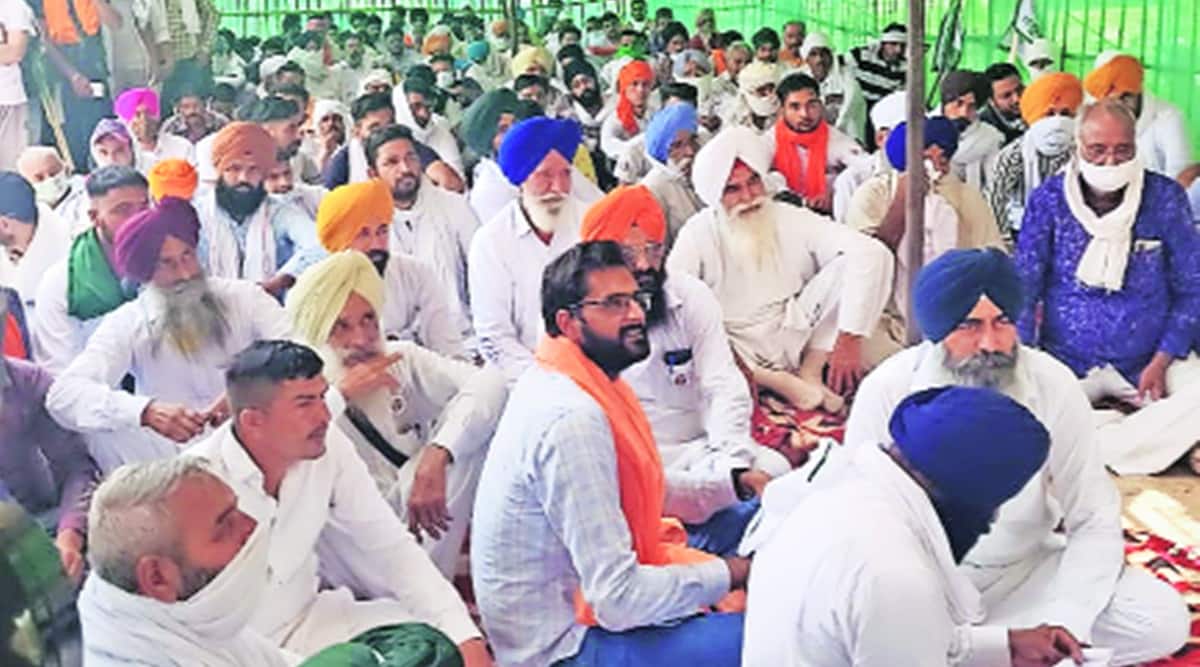 AMID GROWING VOICES against FIRs and arrests of protesting farmers, a kisan panchayat held in Sirsa Monday gave an ultimatum to the government to withdraw all cases lodged against the agitators during ongoing agitation or face more protests.

The panchayat was called to oppose the registration of an FIR against around 150 farmers in connection with a protest held near the residence of Deputy Chief Minister Dushyant Chautala on May 26 when the agitators observed “black day” to mark completion of their six-month long agitation against three contentious farm laws.

“If the government doesn’t withdraw FIRs, we may stage bigger protests after consultation and approval from the leaders of Samyunkta Kisan Morcha,” said farmer leader Lakhvinder Singh, while sharing decisions taken in the panchayat.

On the other hand, Hisar Divisional Commissioner Chander Shekhar blamed the agitators for “removal of police barricades in Sirsa illegally” when they burnt an effigy just 200 meters away from the Deputy Chief Minister’s residence adding the farmer leaders had given assurance to hold peaceful and non-violent protest when talks were held with them in Hisar on May 24.

Sirsa’s farmer leaders have demanded withdrawal of all cases lodged against farmers adding the police have lodged several FIRs against them in connection with different phases of their agitation including “rail roko”, road blockade and gherao of Dushyant Chautala’s residence in Sirsa on the occasion of Holi in 2020.

Over the past few days, protests have been increasing against registration of cases against agitator farmers.

On Sunday, farmers had blocked Jind-Hisar state highway to protest the arrest of a farmer, who was charged for “provocative statement” against a senior leader of the ruling BJP-JJP alliance.

Police said the accused was booked under various sections of the IPC while the agitators allege “undue haste in conducting a raid with a cavalcade of police vehicles to arrest the farmer”.

Earlier, farmers had staged a massive protest in Hisar on May 24 against the registration of an FIR against 350 farmers in connection with the clashes that took place between the agitators and policemen over the visit of Chief Minister Manohar Lal Khattar on May 16.

Farmers had ended the protest only after an assurance from the administration that the FIR will be withdrawn preferably within a month following due legal process.

On April 19, the agitator farmers had “gheraoed” Ismailabad police station of Kurukshetra district for almost eight hours “to express resentment against an FIR lodged against farmers under false charges”.

The police had denied the allegations stating the accused were booked in connection with an alleged assault on a BJP leader.

Then, BKU leaders had alleged that the Haryana Police were using CIA (crime investigation agency), which is normally assigned the task to probe heinous crimes, to “pick up agitator farmers from their homes in the cases lodged in connection with the agitation”.

On its part, police had said the cops from police stations too conduct raids to arrest the accused.

Meanwhile, farmers have decided to burn copies of three farm laws in front of Sirsa BJP MP Sunita Duggal’s residence on June 5. They have also planned movement of a cavalcade of vehicles to Tikri border from Sirsa on June 13 as part of their agitation.