While her family alleged that she was denied admission, adding that the staff on duty 'misbehaved' with them and told them to take her to another hospital, the doctors on duty claimed that the woman was a 'high risk' case with 'extremely low haemoglobin levels'. 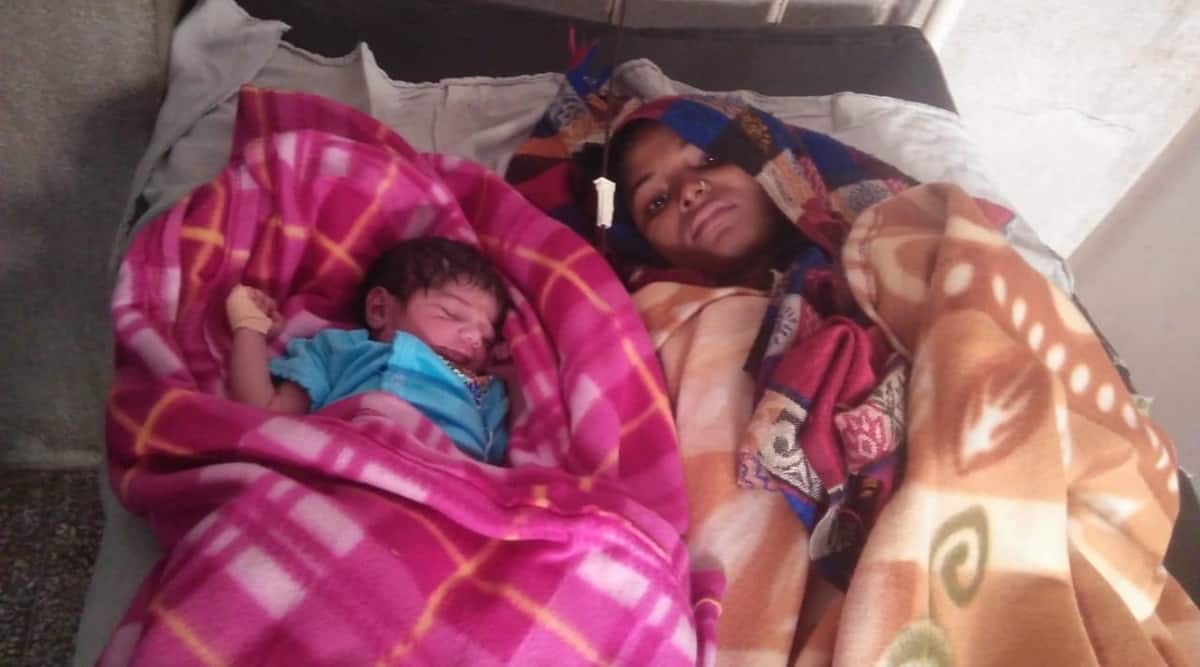 A 19-year-old woman delivered a baby girl on the floor in Moga Civil Hospital’s parking lot in the early hours Saturday. While her family alleged that she was denied admission, adding that the staff on duty ‘misbehaved’ with them and told them to take her to another hospital, the doctors on duty claimed that the woman was a ‘high risk’ case with ‘extremely low haemoglobin levels’. They added that this was the reason that she was referred to Guru Gobind Singh Medical College and Hospital (GGSMCH), Faridkot. The distance from Moga to Faridkot is nearly 60 km.

The woman, who was in labour pain when brought to the hospital around 5 am, delivered in the hospital’s parking area without any medical help from hospital’s staff, her family alleged.

Speaking to The Indian Express, Narender Kumar, brother of the woman, Ankita (19), from village Jalalabad of Moga, said, “We brought my sister to the hospital around 5 am today when she was in labour pain. When we reached here, the hospital staff misbehaved with us. Hamare saath bahut hi bhadda vyavahar hua (We were treated very badly). They told us to take her away to some other hospital and said that a major surgery would be required to deliver the baby. The staff at Moga Civil Hospital refused to admit her and started arguing when we said that she needed immediate medical help. We were turned out of hospital and around 5.45 am, when we were still in the parking area, she screamed and collapsed on the floor. She delivered on the floor without any help from the staff. Her mother-in-law and some other women from family helped in delivery but none from staff came to help. What happened with my sister should not happen with any other expecting woman in this country. After the delivery, the stray dogs licked blood on the floor. If this is how, patients are treated here then what kind of government hospital is this.”

Ankita’s husband, Sarvan Kumar, who works as a brick kiln labourer, said, “We are very poor and it wasn’t possible for us to afford delivery in any private hospital. My wife was in extreme pain and staff here told us to take her to Faridkot on our own, without any help.”

The brother further claimed: “They took thumb impression of one of our family members forcefully without telling what was written on the paper. Later we got to know it was consent form saying we were shifting her on our own.”

After the woman delivered on the floor, she was referred to Guru Gobind Singh Medical College and Hospital, Faridkot where condition of mother and baby was stated to be stable.

“After delivery, an ambulance was provided to take baby and mother to Faridkot,” said her brother.

Meanwhile, the doctors claimed that the 19-year-old’s case was a ‘high risk’ one and she was referred to Faridkot due to ‘extremely low HB levels’.

Dr Simrat Khosa, speaking to the media, said, “A 19-year-old woman Ankita was brought to us around 5.15 am. It was her first delivery and we examined her. It was an extremely high risk case with just 6 gm of blood and she was in labor. There are several complications in such patients post-delivery. We told the family to take her to GGSMCH Faridkot which has better facilities. First the family agreed to take her there and we made them sit and wait for the ambulance. Immediately, another patient arrived and entire staff got busy in conducting her delivery. Later, Ankita’s family said they want to go to private hospital, not GGSMCH Faridkot and they signed consent document for the same. After signing the document, patient and her family left without informing anyone.”

On allegations that thumb impressions were taken forcibly, Dr Khosa said, “It is completely false allegation. There is documentation for every process….Patient and baby are fine. Baby is healthy weighing 2.5 kg. Also they came to us without any prior medical documents. They did not show us any prior check-up record.”

This was the second such case in Moga Civil Hospital when a woman delivered on the floor.

In January this year, Amandeep Kaur from village Baje Ke had delivered the baby boy on floor after the staff on duty allegedly refused to take her inside labour room. Later, an internal probe found, that two senior doctors who were on emergency duty that night were not only absent from duty but did not turn up even after six emergency calls from hospital.

The baby was shifted to Guru Gobind Singh Medical College and Hospital, Faridkot only after doctor in next shift checked him but he died on January 16. While Health Minister Balbir Singh Sidhu announced that both doctors indicted in the report were ‘suspended’, he revoked his orders later.