To begin with, contractual Class IV employees of 135 Urban Local Bodies (ULBs) have been on strike since the second week of May, refusing to collect garbage across cities. 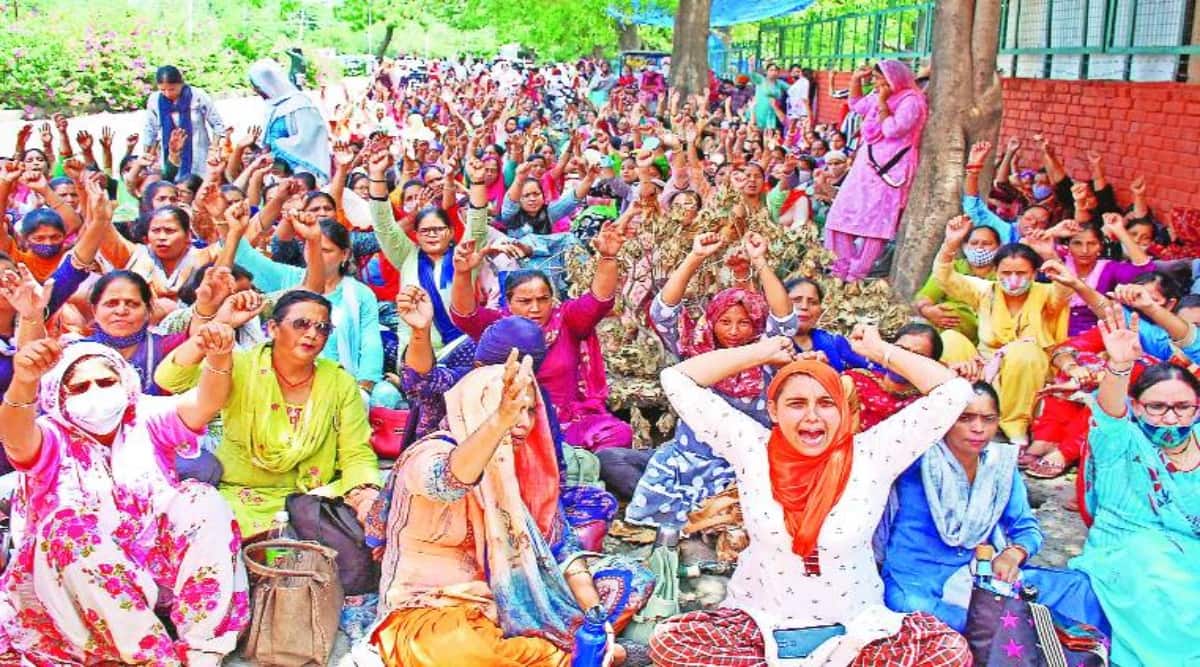 Farmers are not the only ones walking the protest path in Punjab. As the state heads for Assembly polls in 2022, various groups are busy ramping up pressure on the government to get their demands met. Over the last month, protests have picked up over different issues.

To begin with, contractual Class IV employees of 135 Urban Local Bodies (ULBs) have been on strike since the second week of May, refusing to collect garbage across cities.

“Our strike started May 13 and it has been over a month now. But it seems that government is ok with filth on roads and not bothered to resolve our issue. All we want is regularisation of our jobs,” said Ashok Sharvan, president of Punjab Safai Karamchari Union.

Speaking about the protest, BJP leader Subodh Verma, who hails from Fazilka, said: “Filthy roads are a source of infection. I am planning to file a PIL in the High Court..How can the government be so casual over this issue?”

Punjab Local Bodies Minister Brahm Mohindra said, “I met members of Safai Karamchari Union on Thursday. I am hopeful that their issues will be resolved.”

“We switch off our official mobiles from 5pm to 9am as a mark of protest. We are seeking supplies in our stores so that we can carry our repair works. Consumers target us first. In paddy season, we have to be extra careful for giving better supply to consumers. Moreover, we also want posts to be filled and pay commission of Punjab government should be applicable for us as well which is not as of now. However, our demands are not even being heard…,” said Ajaypal Singh Atwal, general secretary of PSEB Engineers Association.

The Association will be giving their official SIM cards back to management of PSPCL and PSTCL by June 25 if issues are not resolved. These protest as of now includes 1,800 engineers ranging from SDOs to chief engineers.
A Venuprasad, chairman-cum-managing director (CMD), PSPCL, said, “We have agreed to their majority of their demands and have sought time from them to examine a few other demands. In the interest of farmers and the summer season, we request them to withdraw their strike.”

Revenue official too are on a warpath in the state. Gurdev Singh, president of Punjab Revenue Officers Association, said: “We are observing an inter-departmental strike as we are boycotting executive magistrate (EM) duties. Often in case of law and order conditions, tehsildar or revenue officers are sent at the spot as EM, but we don’t have any government vehicle and even we go without security. We keep on explaining to the cops present at the spot that we came at the spot as EM. So, we want official vehicles and security before going to such spots. We have a few more demands as well.”

Even clerical staff of the Revenue Department was also on strike earlier due to which land registries work was being affected. The staff has now come back to work but with a one week ultimatum. They want vacant posts to be filled and are also seeking promotions of clerical cadre.

Revenue Minister Gurpreet Singh Kangar said, “I am aware of the demands of clerical cadres and even the revenue officers. I had a detailed meeting with revenue officers and they are expected to withdraw their strike. Clerical staff will also not go on strike again as we had a meeting with them, we are looking into their demands of promotions and vacant posts. I am aware that due to their strike, land registry work had come to a halt and people had to suffer a lot.”

Since December 31 last year, a pakka dharna under the banner of Berojgar Sanjha Morcha is also going on in front of the residence of Punjab Education Minister Vijayinder Singla.

“This Sanjha Morcha includes four unions of unemployed seeking jobs in the Education Department and fifth one seeking jobs in the health department. Around 5-6 meetings have happened so far with Education Minister or officials, but have not yielded any results and another 5-6 meetings have been cancelled by government which shows seriousness of the Punjab government  to provide jobs to unemployed or also to solve the issues of common public. We have faced lathi charge at Sangrur, Patiala a number of times while protesting to seek jobs,” said Sukhwinder Singh, president of the Morcha.

On Tuesday, Morcha members were lathicharged in Patiala.

Vijayinder Singla, Punjab Education Minister, told The Indian Express: “We are in talks with all protesting unions, but recruitments have to be done on merit basis in this competitive world. We are keen on recruiting teachers, but under elementary cadre, protesting teachers say that B.Ed teachers should not be considered . Likewise, education volunteers who are working in the Education Department on contract are being given marks ranging from 1-10 based on the years of service they have put in the department, in case they apply for regular jobs in the Education Department. However, protesting teachers are even against this weightage. However, we are in talks with them and hope to get the issues resolved.
FUll report on
www.indianexpress.com