He also promised to establish a university and medical colleges/multi-speciality hospitals in the name of Dr B R Ambedkar and BSP founder Kanshi Ram, respectively. 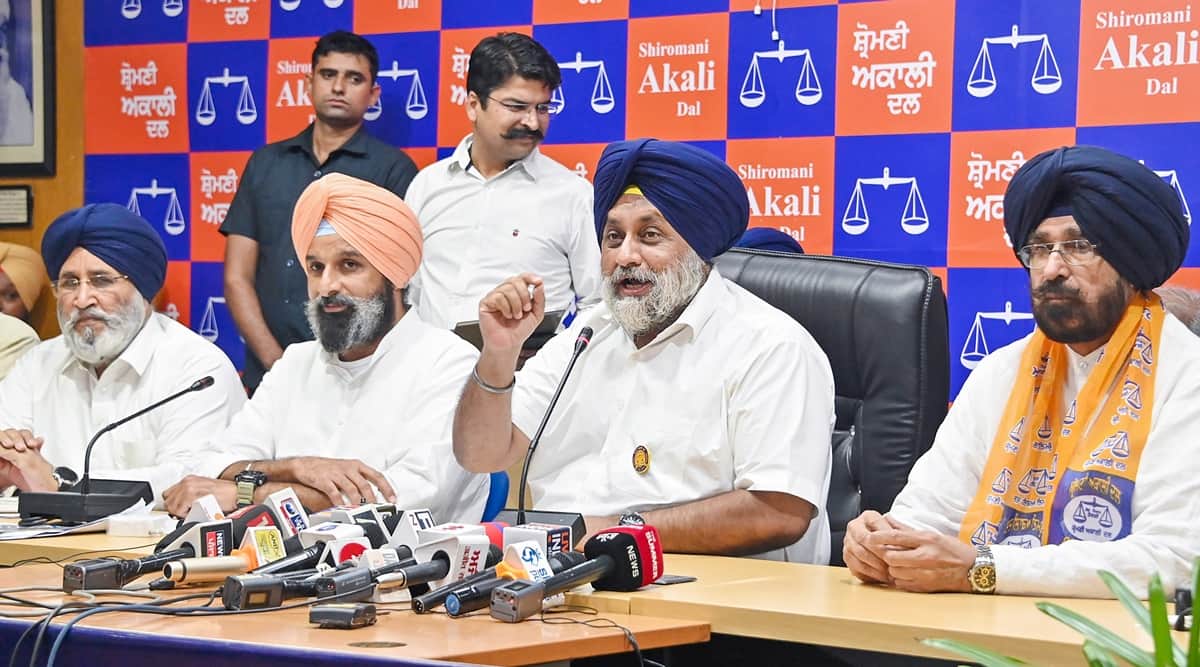 The SAD-BSP allianace on Saturday announced that if voted to power, they would implement 27.5% reservation quota for OBCs on priority as per the recommendations of the Mandal Commission report.

This comes after the Congress made Charanjit Singh Channi, a Dalit leader, the Chief Minister. Other parties were harping on making Dalit leader Deputy CM. Besides, the Congress gave representation to OBC in the Cabinet by appointing Sangat Singh Gilzian as Cabinet minister, who belongs to OBC. The OBCs have 35% population in the state.

Addressing the “Bhul Sudhar Rally (rectify the mistake)” in Jalandhar on Saturday to pay tribute to Kanshi Ram on his 15th death anniversary, SAD president Sukhbir Badal announced they would implement Kanshi Ram Pendu Vikas Scheme once voted to power in 2022. Under this scheme, all villages with 50% Scheduled Caste population would be given a special grant for development.

He also promised to establish a university and medical colleges/multi-speciality hospitals in the name of Dr B R Ambedkar and BSP founder Kanshi Ram, respectively.

“We are also committed to distributing five lakh houses to poorer sections among the Scheduled Castes and Backward Classes. One lakh houses will be distributed to both communities every year. We will also split the SC and BC department into two to ensure focused development of both the SC and BC communities,” Sukhbir said.

He said that 400 power units will be given free of cost to all and reiterated 33% reservation in all educational institutes and universities for the students of government schools.

Taking a dig at the Punjab Congress, Sukhbir said that the Congress never wanted Charanjit Singh Channi as CM and now Congress state president Navjot Singh Sidhu is not allowing him to appoint Director General of Police, Advocate General and Senior Superintendents of Police of his choice.

BSP state president Jasbir Singh Garhi said that their government would implement 27.5% reservation as per the recommendations of the Mandal Commission for OBC classes. He asked Delhi CM Arvind Kejriwal to do the same in Delhi if he is so committed to the welfare of the backward classes.

BSP Punjab affairs incharge Randhir Singh Beniwal said that “when Mandal Commission recommendations of 27% reservation quota for backward classes was to be implemented in the 1990s at the insistence of Kanshi Ram, the BJP and Congress hatched a conspiracy and launched Kamandal Yatra and brought Babri masjid issue to stall the implementation of the reservation. “And these parties made Kalyan Singh, a former CM of UP from backward classes, a scapegoat,” he said.

Speaking to mediapersons, the SAD president said Navjot Sidhu had not only indulged in a sham hunger strike but also insulted the memory of slain journalist Raman Kashyap by indulging in a drama at the latter’s residence. “You tell me – is it a hunger strike if one has one’s full dinner and then ends the alleged strike even before breakfast time? It is condemnable that Sidhu indulged in this circus for the attention of cameras and has no interest in ensuring justice for the four farmers as well as the journalist who were killed after they were crushed under the vehicle of Union Minister’s son Ashish Misra. It is even more galling that Sidhu took the pretext of Ashish surrendering himself for questioning to put an end to his sham hunger strike. The demand was for Ashish Misra’s arrest which is yet to take place,” Sukhbir said.

The SAD president also condemned the delay in arresting Ashish Misra besides demanding the dismissal of Union Minister of State for Home Ajay Misra.

Later, Sukhbir paid obeisance at Devi Talab Mandir in Jalandhar and said that Hindus have complete faith in the leadership of SAD due to its secular credentials.

A large number of farmers had gathered at Pathankot Chowk in Jalandhar to gherao the SAD-BSP leaders. One of the farmers even threw his chappal at the vehicle of Sukhbir which hit the tyre of the vehicle. The farmer organisations have told the political parties not to organise big rallies. It was the second big rally of SAD-BSP in Doaba region after the farmers’ appeal.