The proposal comes just days after locals as well as CM Stalin had opposed to an earlier similar initiative by the Union Ministry of Petroleum and Natural Gas inviting bids for the development of oil and gas fields at Vadatheru, near Pudukkotai. The Oil and Natural Gas Corporation has now written to the State Environment Impact Assessment Authority (SEIAA) seeking environmental clearance (EC) for drilling exploratory wells in Tamil Nadu’s Ariyalur district, despite opposition by locals and even Chief Minister M K Stalin to an earlier similar proposal. The Union Ministry of Petroleum and Natural Gas had earlier invited bids for the development of oil and gas fields at Vadatheru, near Pudukkotai.

Several farmers had protested against the proposal in Vadatheru, prompting Chief Minister MK Stalin to write to Prime Minister Narendra Modi, urging him to intervene and inform the Ministry of Petroleum and Natural Gas to cancel the bidding process for Vadatheru in the Cauvery Basin.

In his letter dated June 13, Stalin had said that his government is of the view that no new hydrocarbon project should be taken up in the Cauvery Basin and other neighbouring districts in the interest of protecting the livelihood of the farmers and the agro-ecology of the Cauvery basin.

“Any such proposal for new extraction in the protected agricultural zone is in violation of the Tamil Nadu Protected Agricultural Zone Development Act, 2020,” Stalin said. He further asked the PM to instruct the ministry to consult the state ab initio before bringing any area in Tamil Nadu for any auctions in future for hydrocarbon exploration and extraction.

Despite the opposition, on June 15, the ONGC initiated a proposal for obtaining EC for exploratory drilling of ten wells in L-I PML Block in Ariyalur district. As per the release from ONGC, application Form-1 under ‘B2’ categories have been duly filled in the form alongside other necessary documents like pre-feasibly report, executive summary, top sheet, kml files and block coordinates of the Ariyalur district. 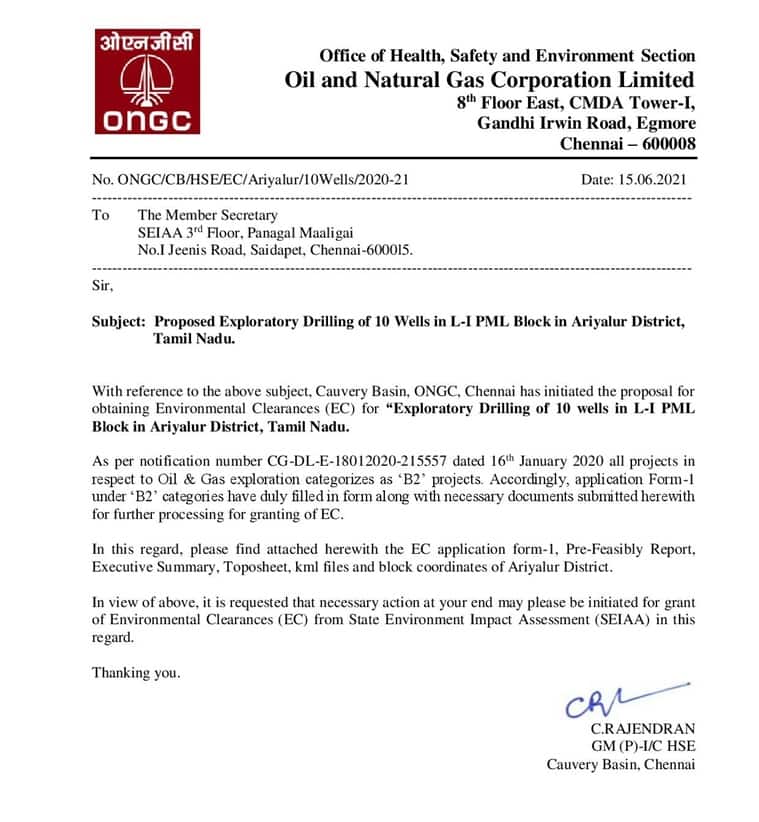 Meanwhile, many farmers, activists and the general public have expressed their opposition to the ONGC’s initiative to seek clearance for drilling exploratory wells in other places in the state as well.

Reacting to the development, Vettavalam Manikandan, state president of Tamil Nadu Vivasayigal Sangam, said: “We are seeing this initiative as a ploy by both the Central and state governments to fool the farmers. During the regime of AIADMK, the state government declared the Cauvery Delta as a protected Zone. During the Neduvasal protest by the farmers, the Pudukkotai district collector signed a letter promising that the state government will not allow any project to take place in the surroundings affecting the livelihood of farmers. If the Central government sets up the plant despite our wish, the state will witness a massive protest. I don’t know why the Central government is so keen on setting up this in Tamil Nadu… do they want to turn this state hostile?” he asked.

Environmentalist G Sundarajan of Poovulagin Nanbargal said the project is detrimental to food security and groundwater of Tamil Nadu.

“Cauvery Delta has been declared a protected agro zone but still, ONGC has gone and announced the auction in Pudukkotai. The Chief Minister’s letter to the Prime Minister was very categorical. It was mentioned that in Tamil Nadu, no new hydrocarbon project should be brought up. In spite of that, ONGC has gone and applied for 10 wells in Ariyalur district. We all know Ariyalur is already a water-stressed district. The pollution levels are high because of the cement industries and it is a seismically active area. The ground depletion is very well known. Despite all these factors, ONGC has gone and applied for licence for drilling exploratory wells. Hydrocarbon is a major issue and the state government will not go back on its decision. We hope ONGC will adhere to the guidelines of the state government,” he said.