The numbers had started to shoot up in the last week of August and had risen to around 50 cases by August 25. This number had jumped to around 181 cases on Monday. 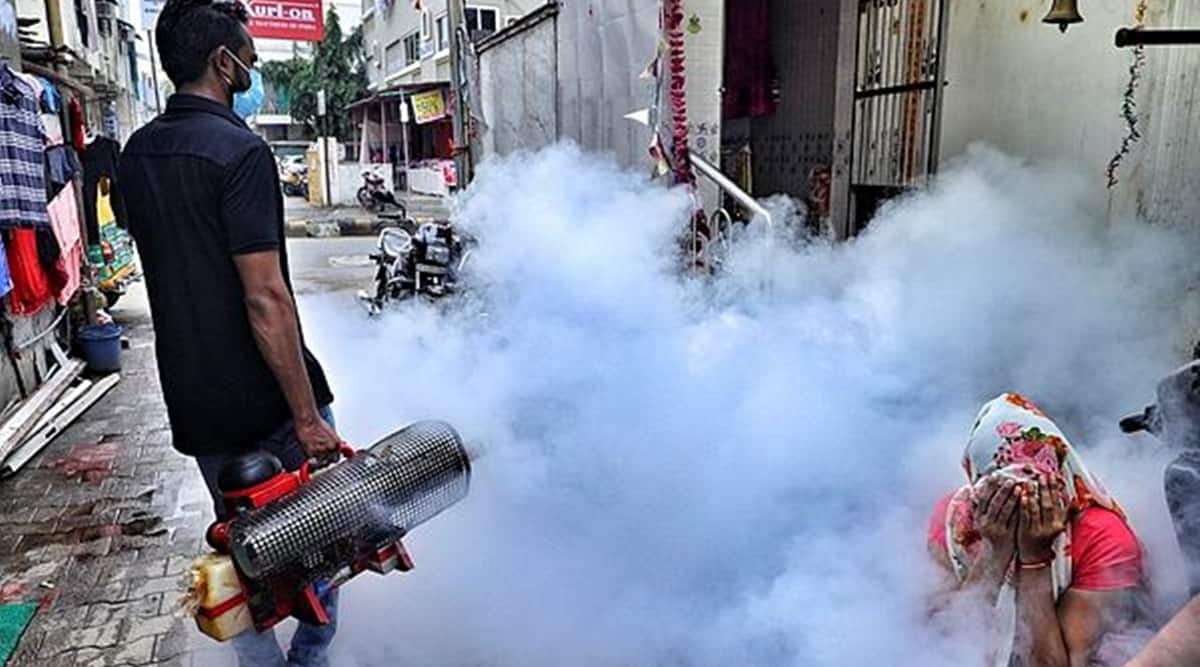 THE NUMBER of dengue cases in Panchkula has continued to spiral, with the district witnessing more than 100 cases of the vector-borne disease in the first 10 days of October itself.

As per figures shared by the health department, only five cases of dengue were reported from January to August this year. The numbers, however, had started to shoot up in the last week of August and had risen to around 50 cases by August 25. This number had jumped to around 181 cases on Monday.

This spike from 50 to 184 has been sudden and drastic but has so far come without deaths, claim district health officials.

Private hospitals of Panchkula, however, have a different story to tell, with several of them claiming to have so far witnessed several dengue deaths. Dr Achint Narang, Head of Department for Critical Care at Alchemist Hospital, Sector 21, said, “The caseload for dengue this year is very high as compared to the previous years. Beds in the critical care wards (ICUs) are full and at the moment, at least 10 people are waiting to get a bed. At least 10 per cent of the total number of people being affected by dengue are requiring critical care. The percentage of those in need of ICUs is also high as compared to previous years,” he says.

As per him, severe infections are being reported especially by those being re-infected with dengue. “Repeated infections are presenting themselves to be more serious. And yes, there have been several deaths. But a confirmation for the same can only be given by the office of chief medical officer,” Narang added.

“We have had no beds in our wards or in ICUs for dengue cases. Several people are currently waiting for admissions,” said Dr Achint.

A senior doctor at Paras Hospital, on condition of anonymity, said, “On Sunday Panchkula tested 130 cases for dengue, of which as many as 85 had tested positive. But this number does not reflect in the official versions. The cases are much higher than what they are seeming to be. The situation is alarming. No hospital has beds right now. The health department cannot substantiate what they are saying.”

Residents blame authorities for inaction
Residents, meanwhile, have blamed the authorities for their failure to undertake preventative measures at the requisite time for the current dengue outbreak.

“There is a huge hotspot of cases in Block A of sector 10. At least 25 cases have been reported from the block itself. At least two of them — Kamlesh Singla, a resident of house number 133, and Tejinder Kaur Chadha, resident of house number 143 — have also succumbed to the disease,” said Bharat Hiteshi, chairman of the House Owners Welfare Association for Sector 10 Panchkula.

Speaking to The Indian Express, Singla said, “I requested the Deputy Commissioner of Panchkula and the district health department to start house-to-house fogging in all the houses of Block A but to no avail. Fogging was done only in affected houses whereas at least 25 houses right or left of the dengue-affected houses should have also been fumigated. The numbers being reported are too few. So either the authorities don’t have proper coordination with the private hospitals as most of the patients are getting treated there or they are willingly ignoring the number of cases.”

A health department official, speaking on condition of anonymity, said, “They utilized total resources of the hospital for the Covid outbreak. All health department staff were given one and only one duty of vaccination, which could have been easily outsourced. Through this, they re-directed all manpower of malaria staff and staff of national programs like TB control, AIDS, HIV et al towards combatting Covid, without thinking of the impact this may cause.”

We have not ignored dengue for Covid: CMO
The health department, which had been claiming no dengue deaths in the district, on Monday said it was going to change its protocol. Dr Mukta Kumar, CMO of Panchkula, speaking with The Indian Express said, “There has been confusion regarding the cases as well as deaths due to two devices of testing which is used to confirm dengue cases. The first one is the Igm Elisa test, which has a 100 per cent hit rate in cases of dengue. The other is the CARD test, which is a rapid antigen test being conducted by private hospitals to ascertain dengue. Now as per WHO guidelines, only cases testing positive under Elisa are to be counted as positives and thus those being tested under CARD were falling through our radar. CARD test gives several false positives and negatives.”

Revising the counting method from Monday, Dr Mukta has now asked district health officials to include those testing positive for dengue with CARD test under a separate counting head.