On Monday, Shiromani Akali Dal chief, Sukhbir Singh Badal — who had arrived in Samrala as a part of his 'Gal Punjab Di' 100-day poll outreach programme — had to face intense protests by several farmer unions and was forced to cancel two-three programmes. 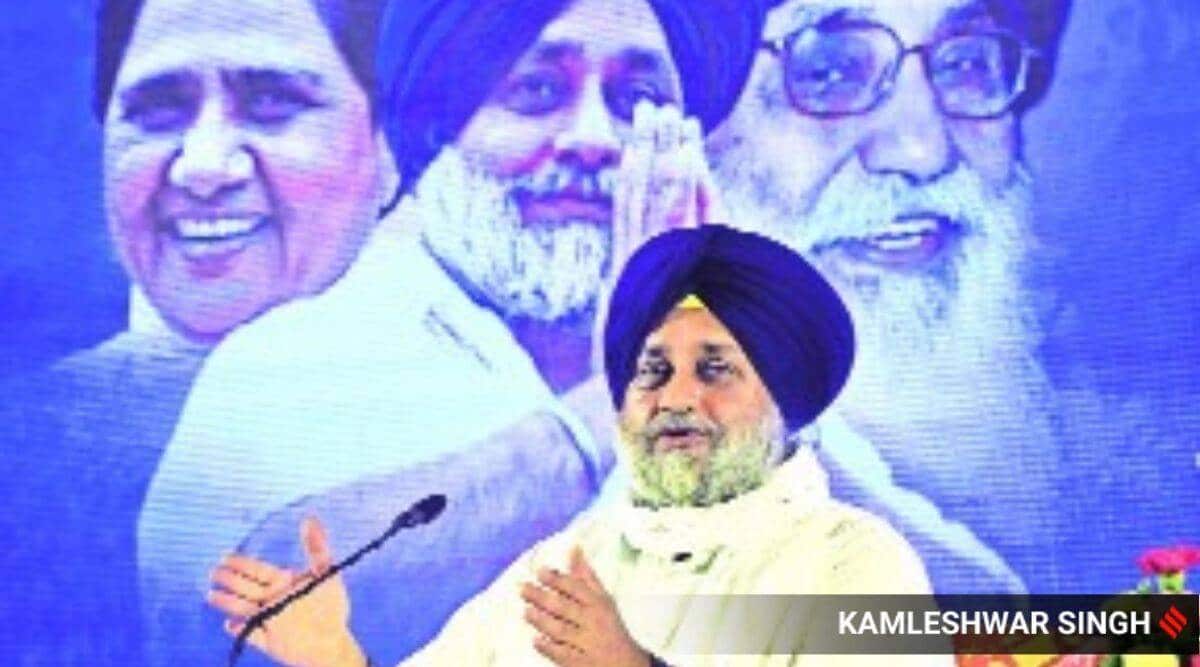 The Khanna Police on Wednesday registered an FIR against 14 identified people and 50-60 unidentified ones for allegedly creating hooliganism during the farmers’ protest against Shiromani Akali Dal (SAD) chief, Sukhbir Singh Badal, near Machhiwara Sahib in Samrala constituency of Ludhiana on Monday.

On Monday, Sukhbir — who had arrived in Samrala as a part of his ‘Gal Punjab Di’ 100-day poll outreach programme — had to face intense protests by several farmer unions and was forced to cancel two-three programmes. However, in a statement later, the SAD alleged that some ‘mischievous elements disguised as farmers were trying to disrupt SAD’s activities’.

Khanna Police have now registered an FIR against 14 identified persons and 50-60 unidentified on the statement of one Harjot Singh Mangat, a youth Akali Dal leader and block samiti member of Machhiwara. Harjot in his statement has alleged that a group of ‘hooligans, taking advantage of the farmers’ protest, tried to ‘attack SAD’s convoy of vehicles’. The men were armed with ‘kirpans’ and other weapons, he claimed.

“… it was around 2.40 pm when Sukhbir Badal’s programme at Nagra Palace was to be cancelled and we were leaving from the venue. A group of people, armed with rods, sticks, kirpans and other sharp edged weapons in their hands, had gathered on Samrala road. They stopped two vehicles and vandalised them. We left the spot with great difficulty. They also hurled abuses at us and threatened to kill us. Had we not rushed from there, they might have hurt someone physically too,” said Harjot in his statement to the police.

Speaking to The Indian Express, Harjot said, “All farmer unions who were protesting during Sukhbir Badal’s visit to Samrala on Monday have distanced themselves from the people named in the FIR. They were not from any farmer unions, but goons sent by the Congress and the AAP who tried to take advantage of the farmers’ protest and create trouble. The farmers protest peacefully. We appeal to the farmer unions that they should organise their protest in a better way, so that such hooligans don’t take advantage of it. In future, it can even lead to loss of life and farmers may be blamed for it. We can identify all the people whom we have named in the FIR. They are local workers of the Congress and the AAP.”

Sub-inspector Vinod Kumar, SHO of Machhiwara Sahib, said that the people who have been named in the FIR were not linked to farmer unions and were ‘anti-social and mischievous elements who tried to create trouble in disguise of farmers who were protesting.’ “We are yet to make any arrests in the case, but those who have been booked are not from any farmers union. They were ‘hulladbaaz’ (hooligans). No farmer union leader has been booked,” said SHO.

FIR has been registered under sections 341 (wrongful restraint), 160 (punishment for committing affray), 506 (Criminal intimidation), 427 (mischief causing damage to amount of fifty rupees or more), 148 (rioting, with deadly weapons), 149 (unlawful assembly) of IPC and 3 and 4 of Punjab Prevention of Damage to Public Property Act, at Machhiwara Sahib police station.
Some of those who have been booked are Jasdev Singh alias Jassa, Sandeep Singh, Yuddvir Singh, Tinku, Jagdish Singh, Raja Kahlon, Amit Moudgill, among others.

On Monday, farmer activists from Bhartiya Kisan Union (BKU) — Rajewal, Sidhupur and Qadian — had protested against Sukhbir Badal at Samrala. Later in an official statement, SAD had said, ‘Mischievous elements, disguised as farmers, were working at the behest of some agencies and anti farmer forces to disrupt our peaceful, pro-Punjab and pro- farmer political activity. Such elements were conspiring to fracture the social fabric of Punjab in order to disturb peace and to blame it on the farmers so as eventually to weaken their movement.”