In the evening it was ‘Coffee with educated youth’, as SAD called it, which saw the party chief meet people in the popular Sarabha Nagar market at ‘Hot Breads’ restaurant. 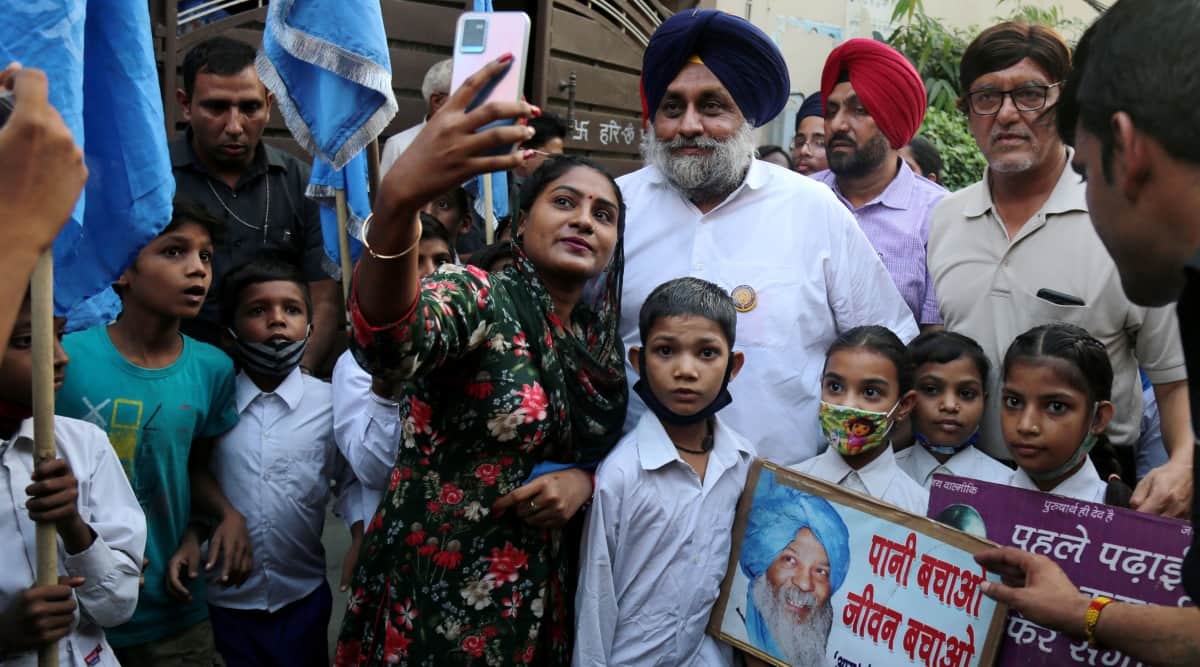 Known as a party with rural appeal, the Akali Dal in the run up to the 2022 Assembly polls is finding new ways to connect with the urban voter. In a first, the party on Saturday launched ‘Breakfast with Badal’, a programme that saw SAD chief Sukhbir Badal interacting with residents of Ludhiana’s posh Sarabha Nagar, Gurdev Nagar area at the house of former SAD councillor Bhupinder Singh Bhinda. In the evening it was ‘Coffee with educated youth’, as SAD called it, which saw the party chief meet people in the popular Sarabha Nagar market at ‘Hot Breads’ restaurant.

Sukhbir has started his public meetings after a brief gap, but now the events are more focussed on urban voters.

In the breakfast session, apart from discussing the local corporation related issues, Sukhbir also explained achievements of the previous SAD-BJP government. He claimed of building a wide network of roads in Punjab as he sought votes for Grewal, candidate from Ludhiana West.

In Ambedkar Nagar, Sukhbir Badal interacted with women voters of the area and was seen getting selfies clicked.

Hira Singh Gabria, SAD’s candidate from Ludhiana South, arranged his meetings with the Ravidassia (SC) and Ramgarhia (OBC) community and another special meeting was also organised with migrants of UP and Bihar in Ludhiana South area.

“I think political parties are coming up with new names for the events to connect to voters,” said a SAD supporter.

Meanwhile, talking about the power crisis in the state, Sukhbir said, “The next SAD-BSP alliance government would establish solar power capacity to meet the Rs 12,000 crore annual subsidy bill for free power given to farmers.”

He said a 10,000 MW solar power facility could easily be established at a cost of Rs 25,000 crore. “In two years we will recover the investment by meeting the subsidy requirements of the state,” he said.

He also announced that a special policy would be unveiled to encourage women entrepreneurs by making loans of up to Rs ten lakh available to them to establish their own enterprise.

Sukhbir also attacked CM Charanjit Channi for allegedly “selling off the interests of the state to the Centre by agreeing to the increase of the jurisdiction of the BSF”. “This effectively means central forces have policing powers across half the state,” he said.

He added: “Punjabis are looking up to you (Channi) to take decisive action on the injustice done to Punjab by the central government. Punjabis also want you to right the wrongs done to the scheduled caste community, especially SC students by your previous Cabinet colleague – Sadhu Singh Dharamsot ‘’.

The SAD president welcomed into party fold Rajinder Pal Singh Gill, chairman, Market Committee, Moga, who left the Congress and joined the SAD. He assured to give him due respect and responsibility in the party.