The state needs at least 2 lakh doses of Covaxin to provide the second dose to those beneficiaries who have already been vaccinated with its first dose. 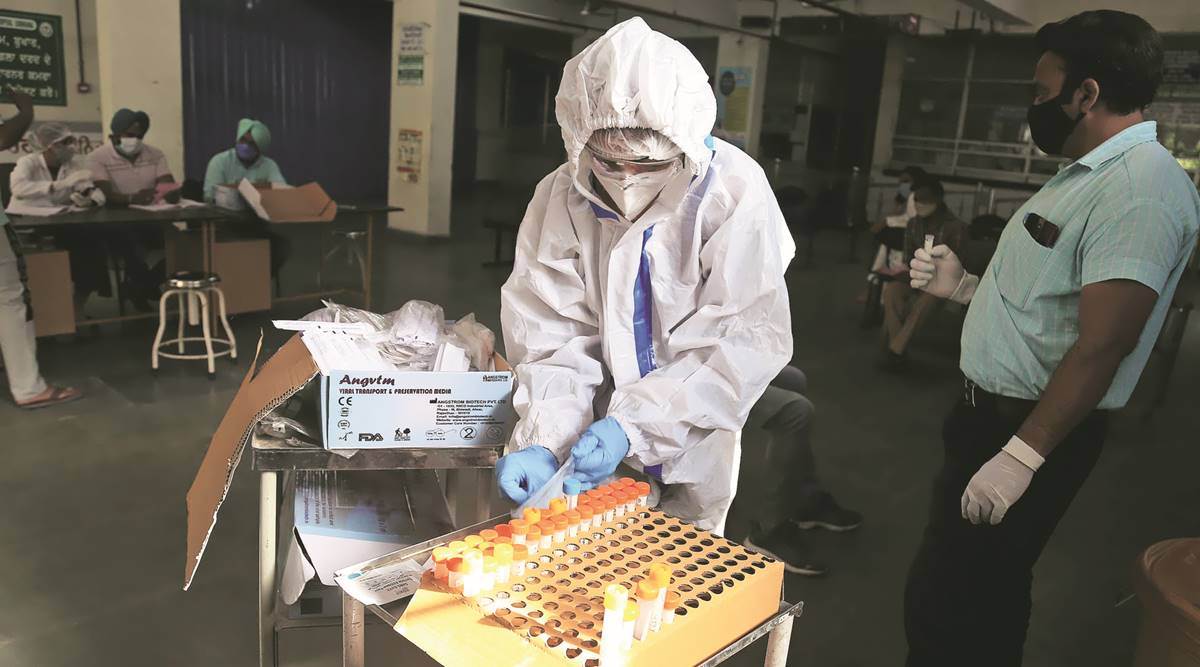 Punjab has received a fresh stock of 2 lakh doses of Covishield from the Centre for the ongoing vaccination drive of healthcare, frontline workers and 45+ population but it is again running short of Covaxin.

The state needs at least 2 lakh doses of Covaxin to provide the second dose to those beneficiaries who have already been vaccinated with its first dose.

Speaking to The Indian Express, Husan Lal, principal secretary, health, Punjab said that 3.50 lakh doses of Covishield have been received recently from the central government (including 2 lakh doses received Wednesday) but the stock of Covaxin is nearly finished.

“We are running out of Covaxin even as beneficiaries are waiting for their second doses. We have written to the Centre to send at least 1 lakh Covaxin doses at the earliest,” said Lal.

Dr Rajesh Bhaskar, nodal officer, Covid-19, Punjab said, “Just 15,000 doses of Covaxin are left with the state. We need urgent stock of Covaxin, at least 2 lakh doses but one lakh at the earliest. We have received Covishield stock but Covaxin is still in extreme shortage.”

Meanwhile, as per the latest data released by the Ministry of Health and Family Welfare (MoH&FW) Thursday, a total of 36.86 lakh doses of vaccine have been supplied to Punjab of which 33.80 lakh doses (including wastage) have been consumed. According to the Centre, Punjab has reported 4.98% of vaccine wastage.

Ambiguity over vaccination drive for 18+ from May 1

For vaccination drive that starts for 18+ from May 1 across the country and for which states have to procure vaccines directly from manufacturing companies, uncertainty looms over as the Serum Institute of India (SII) has not given any confirmation over Punjab’s order of 30 lakh doses of Covishield.

“We are yet to contact Bharat Biotech for Covaxin order as earlier their prices were on the higher side (600 per dose for state governments). But today only they have reduced it to 400 per dose for states so we will consider it now,” said Husan Lal. He said that state was yet to finalise its strategy for vaccination of 18+ as there was no confirmation on vaccine supply as of now.

CHANDIGARH: Punjab Chief Minister Amarinder Singh on Thursday sought directives from the Centre for free vaccine from the Employees’ State Insurance Corporation (ESIC) for all its registered beneficiaries in the age group of 18-45 years.

In a letter to Union Labour Minister Santosh Kumar Gangwar, the Chief Minister said such an initiative would be a progressive step towards covering the industrial working class of the country, as part of the Government of India’s aim of vaccinating the adult population against Covid-19.

The CM said he was confident that his suggestion would be considered favourably in larger public interest. Citing medical experts, the CM stressed that vaccination can go a long way in arresting the transmission of the virus.