Hospital authorities claimed that the accused, Vicky Agrihari, was deliberately not admitting patients to the district hospital and making false allegations that there are neither bed nor oxygen at the hospital. 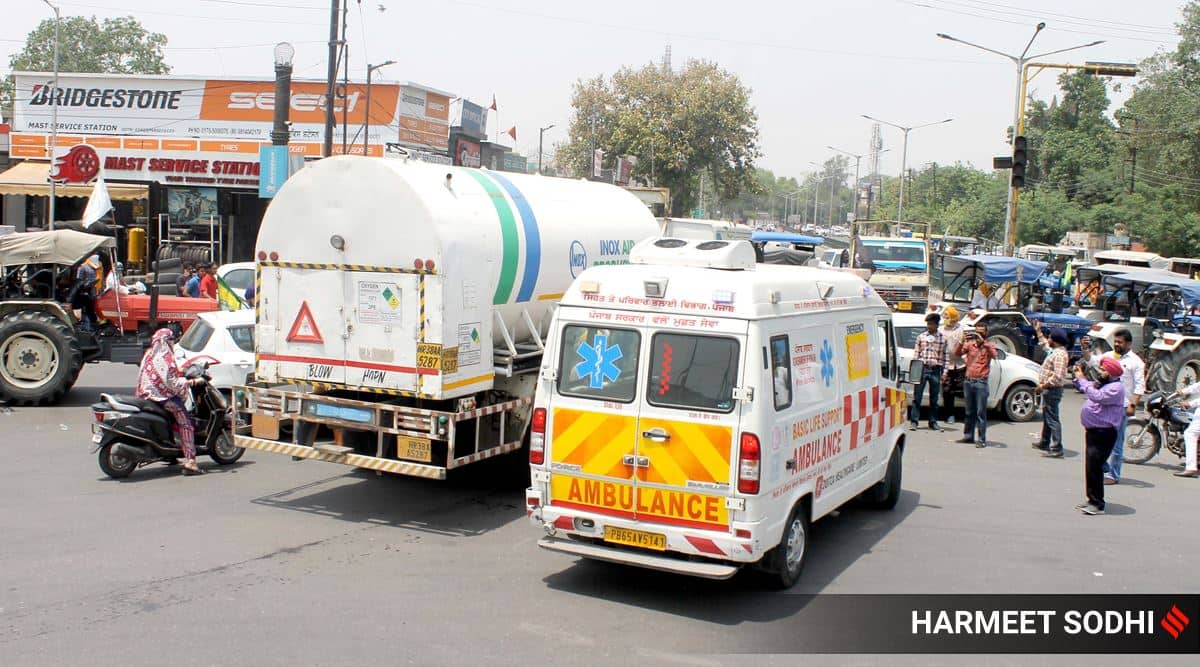 The Jaunpur district administration on Saturday registered an FIR against a 35-year-old private ambulance driver for allegedly making “false and disrespectable” remarks against the state government and administration while he was providing oxygen to patients who were waiting outside the district hospital to get admission.

Hospital authorities claimed that the accused, Vicky Agrihari, was “deliberately not admitting patients to the district government hospital and making false allegations that there are neither bed nor oxygen at the hospital. They also alleged that Vicky was not following Covid protocols while providing oxygen to patients.

After a complaint by hospital staff, an FIR was lodged against Vicky Agrihari on Friday on charges under the Epidemic Disease Act. The police also invoked IPC section 188 (disobedience to order duly promulgated by public servant) and 269 (negligent act likely to spread infection of disease), said Station House Officer, City Kotwali police station, Tarawati Yadav adding that Vicky is accused of wrongly providing oxygen to patient outside the district hospital. No arrest has been made in the case yet.

According to Vicky Agrihari, on Thursday morning he brought a patient from a private hospital to a government hospital after his condition deteriorated. He claimed that doctors at the private hospital refused to admit the patient, citing unavailability of bed and oxygen.

“Since it was an emergency situation, after making the patient lie down at a corner of hospital building, I brought an oxygen cylinder kept inside my ambulance. I gave oxygen to patient from my cylinder. Seeing this, several persons who were waiting to get other patients admitted came and asked to arrange oxygen for them also,” said Vicky adding that he has been “running ambulance since 2004”.

Vicky claims to have worked at a private hospital as a compounder for seven years in the past.

“I fitted the oxygen kit for the patient and then arranged two more oxygen cylinders for other patients. One of my friends also brought oxygen cylinders to help people. Around 3:30 pm on Thursday, a senior officer visited to hospital after which all patients were admitted,” said Vicky adding that he was not attached with any NGO and nor did he make any video from his cellphone at the spot.

Asked about the allegations against him, Vicky claimed, “In the afternoon, one of the hospital staffers came to me and asked to give him oxygen cylinder. When I refused, they got a case filed against me.”

When contacted, Chief Medical Superintendent of the district hospital, Dr Anil Sharma, said the action was taken because Vicky made allegations against the administration and hospital while making a video on his cellphone.

“On Thursday, Vicky brought a patient to the hospital but he did not get him admitted. Vicky kept the patient near themain door of the hospital building and started giving oxygen from his cylinder to him. Vicky then took out his cellphone and started making a video, alleging that the government and hospital administration are not providing any help to the patient and that he was trying to help them. Vicky is also heard saying that a group with which he is attached is providing oxygen to all patients. I informed the police but before they arrived, Vicky escaped from the spot,” said Sharma, adding that all patients present there were admitted in hospital and given oxygen. .

“With his act, Vicky was trying to bring disrepute to the district hospital and administration and giving publicity to his group. I got a case registered against him,” said Sharma adding that Vicky had also, later in the day, shared the video on a WhatsApp group.

Jaunpur District Magistrate Manish Kumar Verma said the matter “came to my knowledge” and “an inquiry is being done”. He added that if anyone is found guilty, action would be taken accordingly.