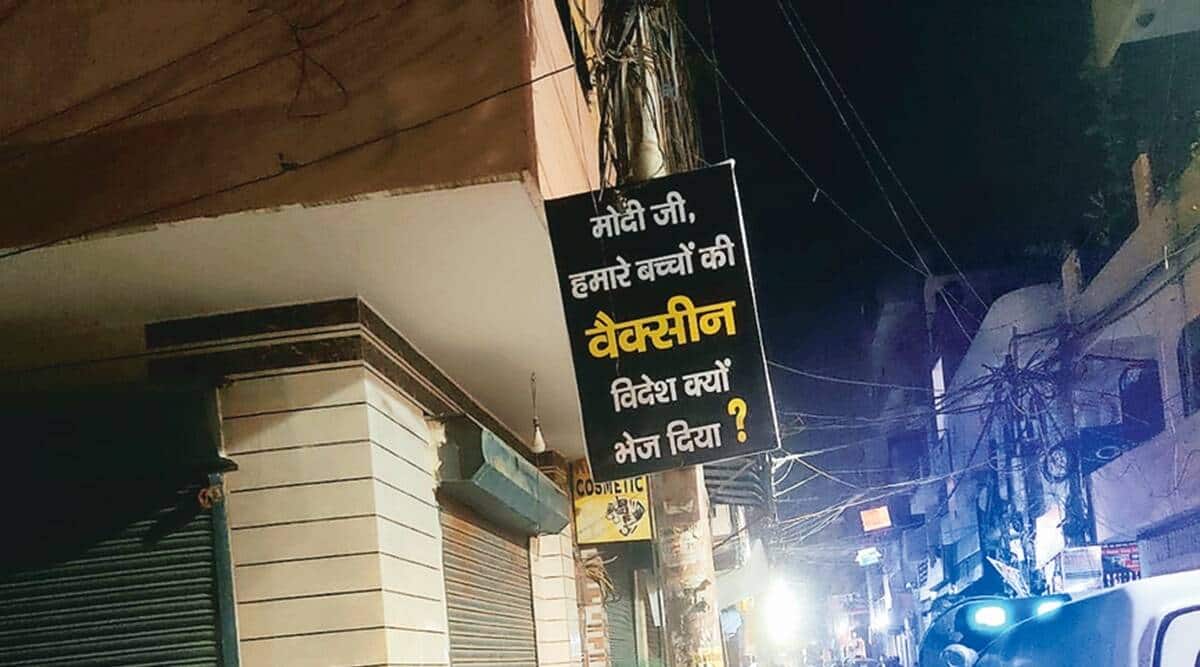 The Aam Aadmi Party on Sunday said it was them who had put up posters criticising PM Modi of exporting Covid-19 vaccines and the police should arrest the party’s leaders and MLAs instead of harassing people who were simply pasting them across the city.

The Indian Express had first reported on Friday that the Delhi police have registered FIRs against the people who had pasted the posters across the city. The posters read: “Modi ji hamare bachon ki vaccine videsh kyon bhej diya (Why did you send our children’s vaccines abroad?)”.

So far, at least 25 people have been arrested by Delhi Police regarding the matter. Most of those arrested are daily wage workers or rickshaw drivers. Police had earlier said that they were probing the role of Kalyanpuri AAP councillor Dhirendra Kumar in commissioning these posters.

“Today, when people are asking why crores of vaccines were exported to Pakistan, Bangladesh, Iran and Iraq, Modiji’s Delhi police is filing FIRs and putting our workers in jail. Every morning, 500-550 workers are called to the police station and made to sit in thanas till night. What is their fault? Is it because they questioned Modiji? They asked him why he sent vaccines meant for our children to other countries. I want to tell Delhi Police and BJP – you cannot arrest us for asking these questions. We live in a democracy,” Pathak aded.

Several MLAs and senior party leaders, including Deputy Chief Minister Manish Sisodia, also tweeted regarding the issue on Sunday. “A government that was boasting about posters put up in foreign countries is now scared of posters put up in their land,” he said.

Posters thanking Prime Minister Narendra Modi had come up in Canada last month after the country received vaccines from India.

“Who sold our children’s vaccines to foreign countries for image management,” he said in another tweet.

AAP leaders said the people that are being arrested are ones who earn a paltry sum for putting up posters.