Their captions notwithstanding, the content of the videos convey all the good things achieved by the Kejriwal government in the areas of education, health, power, transport. The video clip, lasting a little over three minutes, leads with the caption “watch, how a child exposes Arvind Kejriwal”. Another clip exclaims, “Just what did Delhi say about Kejriwal?”. The clip bears the thumbnail of a woman with a bewildered expression. The campaign song ‘Lage Raho Kejriwal’ is so good that even Delhi BJP chief Manoj Tiwari is grooving to its beats, says the caption accompanying another clip, while another tweet — ‘Kejriwall’, a play on a popular cement ad — depicts the BJP and the Congress trying in vain to bring down the AAP chief.

Their captions notwithstanding, the content of the videos convey all the good things achieved by the Kejriwal government in the areas of education, health, power, transport.

Ahead of the Delhi Assembly polls, the AAP is dishing out catchy one-liners, parody clips and memes on social media. And the man behind the transformation is a 23-year-old from Pune — Abhijeet Dipke. 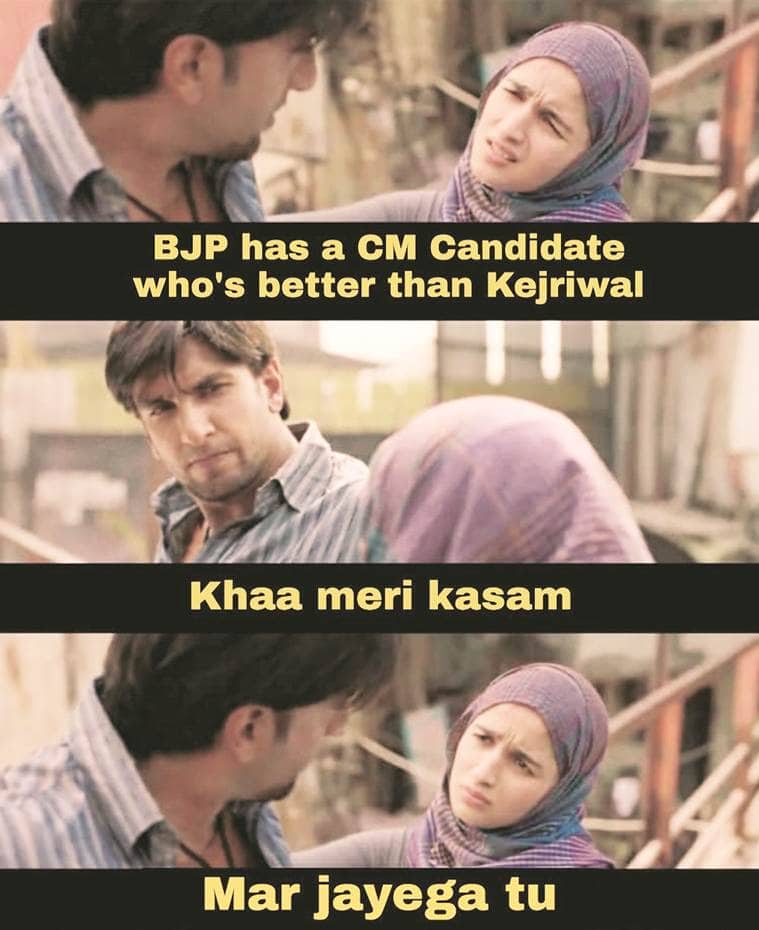 On Sunday, the party posted a series of stills from the movie Gully Boy, mocking the BJP on the question of fielding a CM candidate to counter Kejriwal.

Another meme created by the team features screen grabs from the Shah Rukh Khan starrer ‘Main Hoon Na’. The collage of images and the accompanying text is a play on one of the famous dialogues of the blockbuster, released in 2004, when the target audience of the meme had not yet reached the voting age.

“We are trying to connect better with millennials, first-time voters. Putting out content with heavy political jargon serves no purpose. We have to break down our messages in simple terms, while retaining substance. Memes, short video clips are among the ways that can be achieved,” said Dipke.

Dipke, who reports to AAP IT media head Ankit Lal, said his long association with the party helps him think on the feet. “Most of us have been with the party for some time now. Naturally, we know where to draw the line, not to overstep. That, along with the non-hierarchical structure of the party cells, also helps,” he said.

Lal, who has been heading the AAP’s IT team since 2013, said in the current social media landscape, videos are drawing most of the audience, unlike 2013 and 2015, when news clips and images saw maximum engagements.

“The three major elements of our social media campaign this time are live videos, creative video clips and memes. The CM’s town hall interactions that were live streamed were seen live by 25,000-30,000 people, while eventually they were viewed between three to five million times,” said Lal.

“We have around 3,000 ground volunteers specifically tasked with spreading our centrally generated content down to the booth level. In fact, in some cases, people are voluntarily contributing. For example, the Tiwari video was forwarded to us by a volunteer. We don’t even know who actually created it,” said Lal.

Kanye West Tweets That He's Running For President in 2020

Rude Food by Vir Sanghvi: And the winner is…
World News

Micheal Martin — from teacher to Taoiseach

Russia announces coronavirus deaths exceed 10,000
We and our partners use cookies on this site to improve our service, perform analytics, personalize advertising, measure advertising performance, and remember website preferences.Ok