“The men are primarily construction workers returning from Hyderabad to different parts of Rajasthan,” Rajkumar said, adding that police were probing how they had managed to get that far from Hyderabad without being intercepted. 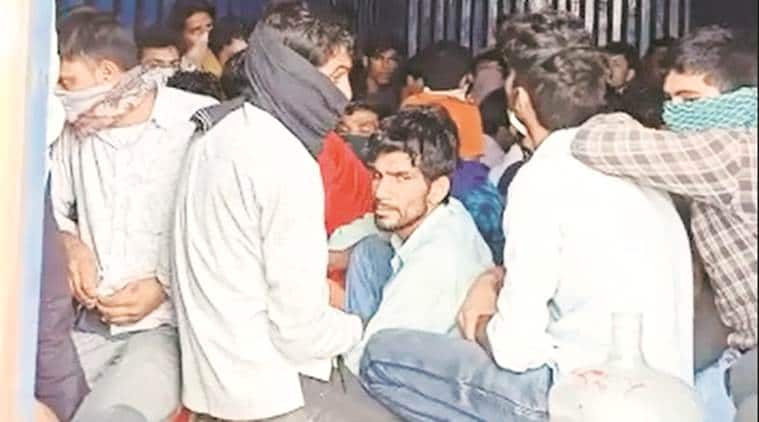 In Yavatmal, Maharashtra, police stumbled onto the trucks containing the migrants during a routine inspection at a police check-post on the state’s border with Telangana. Yavatmal Superintendent of Police M Rajkumar said the drivers claimed to be transporting essential goods to Rajasthan. However, when police and revenue officials checked the trucks, they found several hundred men sitting inside.

“The men are primarily construction workers returning from Hyderabad to different parts of Rajasthan,” Rajkumar said, adding that police were probing how they had managed to get that far from Hyderabad without being intercepted.

The incident of labourers travelling illegally in a railway rake was reported by the Uttar Pradesh authorities to the Railways. The rake was being brought back from Thiruvananthapuram to Gorakhpur, as part of a nationwide measure by the Railways for rakes stranded due to the national lockdown. While most of the men got off at Jhansi, it is not clear from where they got on.

Railway sources said railway managers of several divisions had informed the ministry about coming under pressure from labourers to let them travel in empty rakes. After the matter was highlighted at a video conference Thursday chaired by Railway Minister Piyush Goyal, the movement of all empty rakes has been stopped for the time being.

After they realised that migrants had travelled in the rake coming from Kerala to UP, railway authorities scanned through CCTV footage to determine where they had got on. It doesn’t seem to be either Thiruvannanthapuram or Ernakulum, where the rake had stopped. Officials said while they didn’t have an exact figure, they estimated around 300 labourers used the rake.

“The matter has been brought to our notice and we are looking into it,” Arun Kumar, Railway Protection Force Director General, told The Indian Express.

The Railway Board had earlier this week identified over 600 rakes that were stuck away from home bases because of the lockdown. While ordering that these be brought back to home bases, the ministry had asked officials to ensure there was no unauthorised boarding, with stops only allowed for crew changes.

As the Railways mounts its own efforts to check COVID-19, it is considering waving the mandatory breathalyzer tests for loco-pilots engaged in running goods trains, which are the only ones in operation. Many have refused the same for fear of infection. Officials said they are considering self-certification and administering an “oath” to the drivers.

By Saturday, the Railways expects to have a prototype ready for a non-AC coach to be turned into an isolation ward. The modifications include turning two of the four toilets on the coach into bathrooms with hand shower, removal of ladders, removal of a lower berth, and isolating each cabin with a permanent partition.