Nine corporate hospital groups cumulatively bought 60.57 lakh doses of the total 1.20 crore doses of vaccines procured by private hospitals in the first full month since the Central government revised its vaccine policy and opened it to the market. 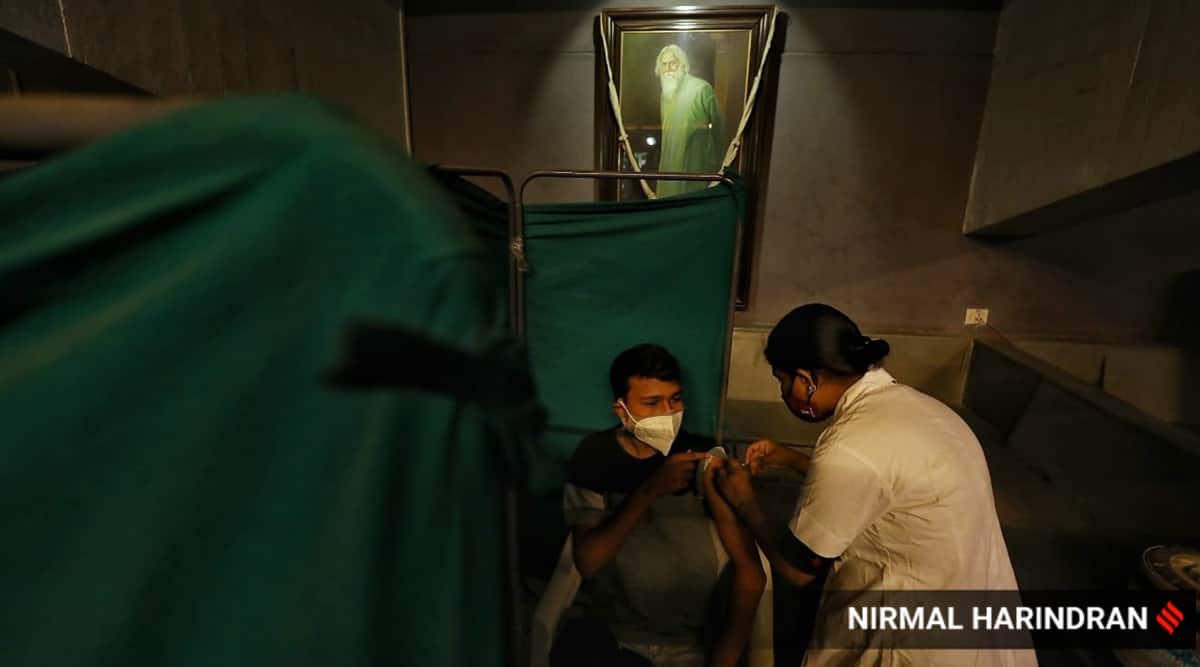 IN WHAT both reflects and accentuates the problem of vaccine inequity, just nine corporate hospital groups in big cities have cornered 50 per cent of the Covid-19 vaccine stock meant for the private sector in the month of May.

These nine corporate hospital groups cumulatively bought 60.57 lakh doses of the total 1.20 crore doses of vaccines procured by private hospitals in the first full month since the Central government revised its vaccine policy and opened it to the market.

The balance 50 per cent of the vaccine stock was procured by 300-odd hospitals, located mostly in the country’s urban centres, with hardly any of them serving regions beyond the Tier-2 cities.

The Centre had allowed state governments and private players to buy 50 per cent of total output directly from vaccine manufacturers from May 1. It had confined itself to purchasing 50 per cent of the output from May 1, to be distributed to states to vaccinate the 45-plus age group. 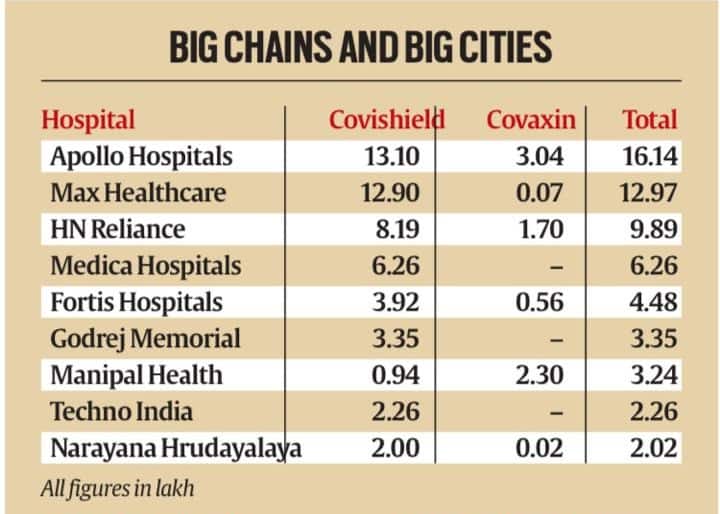 These groups have their presence mostly in metros, state capitals and Tier-I cities. Compared with a price of Rs 150 per dose that Serum Institute of India and Bharat Biotech charge the Central government for Covishield and Covaxin, respectively, the price charged from private hospitals for Covishield is Rs 600 per dose and for Covaxin is Rs 1,200 per dose.

On their part, hospitals charge consumers in the range Rs 850-1000 for Covishield and Rs 1,250 for Covaxin. While this may be affordable for a section of city residents, it is not so for those in the lower middle class and the poor. Besides affordability, the other key aspect relates to accessibility — these doses are being administered in cities even for age groups 18-44 years:

While The Indian Express sent detailed queries to HN Reliance, Fortis, Apollo and Max hospital about the geographical spread (urban and rural) of their vaccination delivery in May, it is yet to receive their response. So, it is not clear if these hospitals have transported vaccines across their chain, or have tied up with corporates, housing societies or smaller clinics in other cities or relatively less urban areas for administering doses.

The data shows the private sector has purchased less than 25 per cent of the total stock procured. Given their current daily immunisation capacity, most have enough supply to last another fortnight.

In a suo motu hearing on vaccination, the Supreme Court on Wednesday rapped the Centre on its vaccine policy, calling the decision to make 18-44 year olds pay for their doses “arbitrary and irrational.” It asked the Centre to review the vaccine policy while observing that the digital divide had hampered vaccination in rural areas.

But it is not just the digital divide. May’s procurement data shows most stock purchased by the private sector is concentrated in urban regions. Apollo Hospitals purchased stock in nine cities. An Apollo spokesperson said some of the stock purchased was distributed to Apollo clinics, Apollo Spectra, and group hospitals in Tier-II cities like Nashik and Indore, but admitted the group had no presence in rural areas.

Max Healthcare purchased stock in six cities. Fortis purchased stock in eight cities. A spokesperson for Fortis said this procurement was distributed to its hospitals all over India, mostly in Tier-I and Tier-II cities. For instance, 3 lakh doses bought in Delhi were distributed across cities in India. HN Hospital (of Reliance Foundation) has only two hospitals in Mumbai and Navi Mumbai, while Medica has one hospital in Kolkata.

The procurement data further reveals a strong urban bias with hospitals in the National Capital Region (NCR), Mumbai Metropolitan Region (MMR), Kolkata, Bengaluru and Hyderabad together accounting for 80 per cent of total stock in May.

In larger cities or metros too, smaller hospitals have raised an issue of disparity. “We ordered 30,000 doses, we got only 3,000. Big hospitals with stronger networks and resources have managed to make better deals with manufacturers,” said Dr Vaibhav Deorgirkar, Medical Director in Hindu Sabha Hospital, Mumbai. He said every day he can open only a few hundred slots to sustain the supply.