To 24-year-old C T Ramnunmawii Parte, the 93-year-old refugee from Myanmar she nursed for 10 days is now “pi-pi (grandmother in Mizo)”. For “pi-pi”, who doesn’t want to be named because of her uncertain status, Parte is “an angel that god sent to me”. 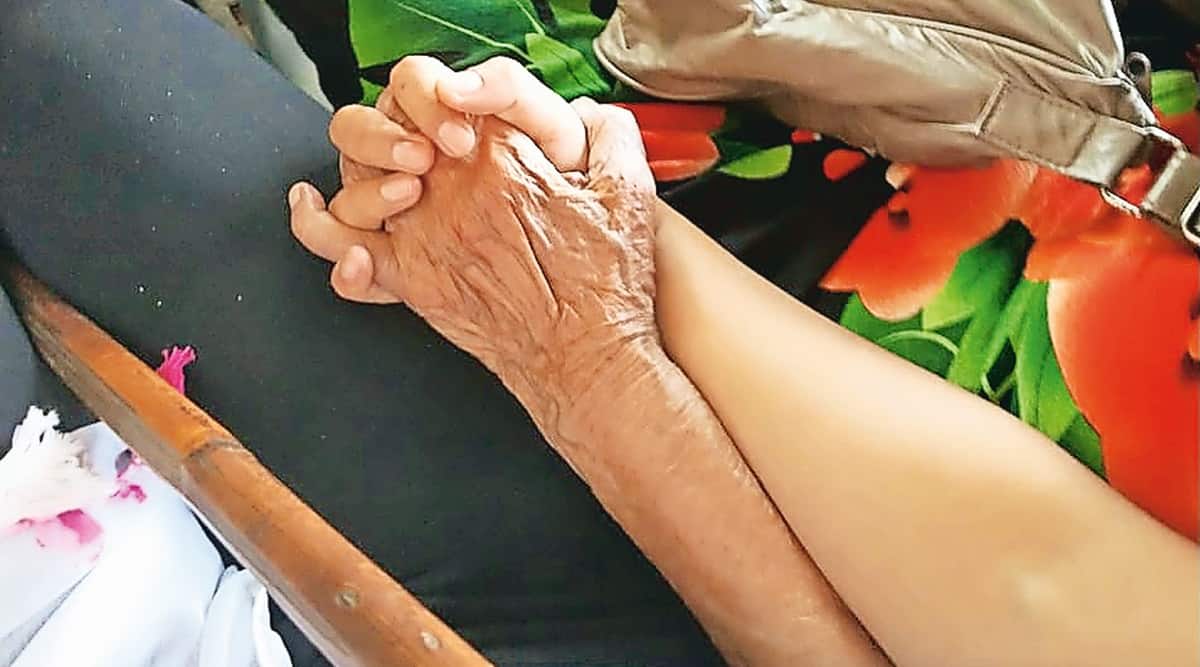 Till a month back they lived on either side of an international border, oblivious of each others’ existence. On May 2, when they walked out of a hospital in Mizoram, arms intertwined, they were bound by more than just the virus they had beaten.

To 24-year-old C T Ramnunmawii Parte, the 93-year-old refugee from Myanmar she nursed for 10 days is now “pi-pi (grandmother in Mizo)”. For “pi-pi”, who doesn’t want to be named because of her uncertain status, Parte is “an angel that god sent to me”.

A law student, Parte tested positive for Covid on April 13. As per the guidelines in Mizoram, which has 1,902 active cases at present and has seen 17 deaths, she was taken to a Covid care centre in Aizawl. A week later, she recovered and was set to go home when she heard that “an old lady with no family” was going to get admitted to the same centre.

“I saw her sitting on the floor. She didn’t know why she was there and she insisted that she wanted to go home. All she could reveal was her name and she kept asking if her family was coming,” recalls Parte.

Though scheduled to be discharged the next day, the 24-year-old says she couldn’t turn away seeing the woman’s plight. “I realised she could not even go to the toilet on her own.” The centre where Parte was lodged, a building developed to accommodate BPL families under a scheme of the Urban Development and Poverty Alleviation Department, Mizoram, had 300 patients at the time, with three doctors, three nurses and three assistants.

Parte immediately asked the authorities if she could be the elderly woman’s attendant.

The authorities agreed, and both were admitted to a hospital in Aizawl, Mizoram’s sole Covid hospital. As she conversed with the woman, Parte realised that the 93-year-old had crossed over from Myanmar — among the hundreds to have fled the country following the crackdown after the military coup in February.

Parte says the 93-year-old didn’t remember well the details of her journey, only that she was headed to live with her daughter, married to a person based in Aizawl. “She said she came by a vehicle up to a point… She is old so she can’t remember most things,” Parte says.

The law student took it upon herself to try and find the daughter. “On April 19, I finally got through and found that the daughter and her family were in home quarantine,” she says, recalling their relief in realising the 93-year-old was fine.

The Sunday Express tried contacting the family, but they did not respond. While the Mizoram government has said it would not turn away the refugees from Myanmar, with people of the two regions sharing deep ethnic bonds, the Centre has been insistent that the borders be sealed — leaving the fate of refugees like the 93-year-old in a limbo.

In a letter to Prime Minister Narendra Modi in March, Mizoram Chief Minister Zoramthanga wrote: “… the Myanmar areas bordering Mizoram are inhabited by Chin communities who are ethnically our Mizo brethren with whom we have (had) close contact… even before India became independent… Mizoram cannot just remain indifferent to their sufferings today.”

The CM told The Sunday Express he was aware of the 93-year-old’s story, as well as the “noble and exemplary service” by Parte. “Everyone must learn a lesson from her, such a humanitarian service she has rendered,” said Zoramthanga.

Unofficial figures put the number of Myanmar refugees to have come to Mizoram since the coup at 4,000-5,000. NGOs have been providing them food, shelter and “whatever else they need”, a government official said. “We accept them, and we will accept her (the 93-year-old) too,” he added.

While the woman is now with her daughter, Parte is in touch with her. She is not bothered about the politics of the issue, nor did it matter to her “who pi-pi was or where she came from”, or that she was a refugee from Myanmar, with whom Mizos like her share a bond, she says. “As a human… I think it’s our duty to help others, irrespective of where they come from.”

Her family was worried for her, admits Parte. A student in Delhi, she had only recently returned to Aizawl at their insistence as cases rose in the Capital. “While I tested negative on arrival, I tested positive later… But they understood my decision and told me to try my best,” she says.

In the 10 days she and “pi-pi” were together, Parte adds, “I fed her breakfast, lunch, dinner, gave her medicines at the prescribed time… cleaned her, washed her clothes and helped her go to the toilet. I would read the Bible to her at bedtime, do her hair… Sometimes we used to chat about her younger days… She told me she was very beautiful.”