Mewalal Choudhary is facing charges regarding alleged discrepancy in the appointment of assistants and scientists during his tenure as Bihar Agriculture University, Sabaur, Vice-Chancellor between 2010 and 2015. Booked by the police, he had gone absconding till he got bail. 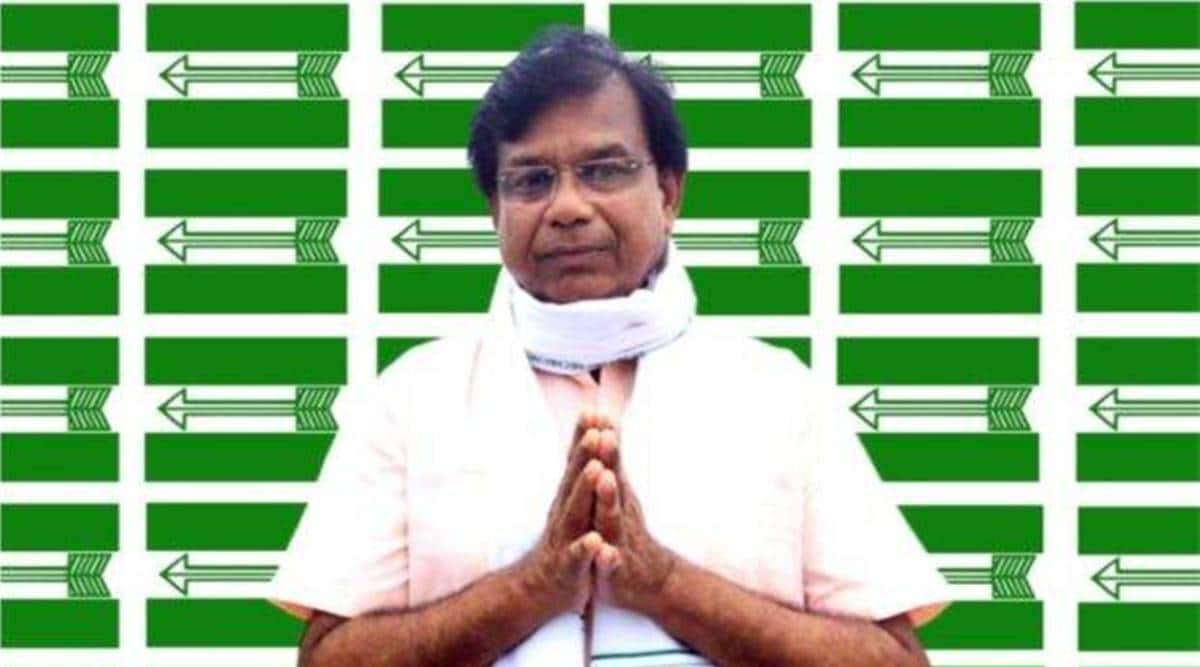 Under attack from opposition parties over corruption allegations against him, JD(U) leader Mewalal Choudhary on Thursday resigned as Bihar Education Minister within an hour of taking charge.

Choudhary is facing charges regarding alleged discrepancy in the appointment of assistants and scientists during his tenure as Bihar Agriculture University, Sabaur, Vice-Chancellor between 2010 and 2015. Booked by the police, he had gone absconding till he got bail.

Sources said the BJP expressed reservations over continuance of Choudhary in the Cabinet. The JD(U), however, maintained that he resigned on his own. Choudhary said, “I am chargesheeted in the case and am cooperating with the investigation. I decided to resign on my own.”

The RJD has been attacking Nitish, who sought re-election on good governance plank, over inclusion of Choudhary in his Cabinet. RJD chief Lalu Prasad had questioned the BJP’s silence on the matter in a tweet.

In 2017, before Nitish switched from the Mahagathbandhan to form a government with it in Bihar, the BJP had stalled proceedings in the Bihar Assembly over the allegations against Choudhary, vowing “not to rest till Mewalal was arrested”. This was soon after Choudhary was booked for cheating, breach of trust by a public servant and criminal conspiracy by the Sabaur Police. Choudhary went missing before he got bail from the Patna High Court. The matter was later referred to the Vigilance Department.

Sources in the BJP said the party leadership told the CM Choudhary would have to step down. “It’s an open and shut case. There was no other way,” said a top BJP leader, pointing out that the party had also led a delegation to the then state governor seeking action against Choudhary at the time. “How can the party be silent over it now?”

Asked why the BJP had not objected earlier, when Choudhary’s name was included in the JD(U) list of ministers, the leader claimed the party had received the names the same day as the oath-taking. “We did not ask them because we did not want them to ask us in turn why were we appointing two deputy chief ministers.”

However, the incident might further strain the fraught ties between the JD(U) and BJP, which is now the larger party in the Assembly. With Nitish seen as retaining the CM post due to BJP “largesse”, many in the party believe he might have sought to “embarrass” the BJP with Choudhary’s appointment.

The case pertains to the appointment of 166 assistant and junior scientists in Bihar Agriculture University, Sabaur, in 2012, while Choudhary was vice-chancellor. It was alleged that those with lesser marks for educational qualification, research and publication of books got through as they were given 20 out of 20 marks in power point presentation and interview, while those lesser qualified got through.

While a chargesheet is yet to be filed against Choudhary, the only accused, the police have framed charges against two others, Rajbhavan Verma and Anil Kumar, whose names came up during investigation. Bhagalpur DIG Sujit Kumar said, “The investigation is on. A supplementary chargesheet can be filed.”

* Dr S K Singh, who got 53.83 marks against 80 for educational qualification, got just 1 mark each out of 10 for presentation and interview. He was not selected.

* Dr Sanjeet Kumar, who scored 53.80 for education qualification and research, got rejected after getting 1 mark each for presentation and interview.

* Santosh Kumar Choudhary got 39.73 marks for educational qualification and research, but was selected after he scored the full 10 marks in interview and presentation each.

* Lakshman K, who got 39.18 marks for educational qualification, was also selected after he got full marks in interview and presentation.

* Likewise, Babulal Dadwal, who got 38.09 marks for educational qualification, made it after full marks in interview and presentation.

Choudhary, who belongs to the OBC Kushwaha community, won from Tarapur defeating the RJD’s Divya Prakash in the recent elections.

Attacking Nitish after Choudhary’s resignation, RJD leader Tejashwi Yadav said: “I had told you before that you have got tired and lost your ability to think. (You) deliberately made corruption-accused a minister and made him resign only after you had to face huge embarrassment over it.”

JD(U) spokesperson Neeraj Kumar said Tejashwi “has no moral authority to talk about corruption”, and asked how he would continue as leader of opposition given that he is chargesheeted in an IRCTC case.