The Bharatiya Janata Party (BJP) on Monday organised “tiranga yatras” in the twin capitals of J&K to commemorate the Accession Day, when then Maharaja Hari Singh signed the Instrument of Accession with India in 1947, as the day was also declared a holiday first time since the region was designated as a Union Territory (UT) last year.

A “tiranga yatra” was organised in Srinagar, where the BJP activists hoisted the tricolour on a cavalcade of cars and marched from Tagore Hall to the Boulevard around the Dal lake.

“The purpose of the ‘tiranga yatra’ is to send a message to those parties, especially [Peoples Democratic Party president] Mehbooba Mufti, who don’t accept the tricolour. These parties have been acting like a virus for the last 70 years and we will not allow their spread any more,” BJP leader Ali Muhammad Mir said.

BJP leaders Sofi Yousuf and Altaf Thakur, who raised pro-India slogans, demanded action against Ms. Mufti for her remarks that “she will not unfurl the tricolour till J&K’s flag was returned”.

Three BJP leaders were detained in Srinagar on Monday when they marched to unfurl the tricolour.

A police official said the three leaders from the Kupwara unit arrived at the commercial hub Lal Chowk on Monday morning and were detained and shifted to the Kothi Bagh police station.

“These activists were heading towards a busy centre and could have caused interruption in traffic. They were also violating the standard operating procedures (SOPs) laid down for the COVID-19 pandemic,” a police official said.

“We wanted to hoist the tricolour to send a message to the members of the Peoples Alliance for Gupkar Declaration (PAGD) that only the national flag will remain in Kashmir,” Mr. Basharat said.

A “tiranga yatra” was also carried out in the winter capital of Jammu by the youth wing of the BJP. Scores of two-wheelers and four-wheelers were decorated with the flags.

Three Jammu-based PDP leaders quit the party “in protest against the recent remarks of Ms. Mufti”. “Some of the actions and utterances are unforgivable. We feel uncomfortable and suffocated in the party,” PDP’s T.S Bajwa, Ved Mahajan and Hussain A Waffa wrote in a joint resignation letter. 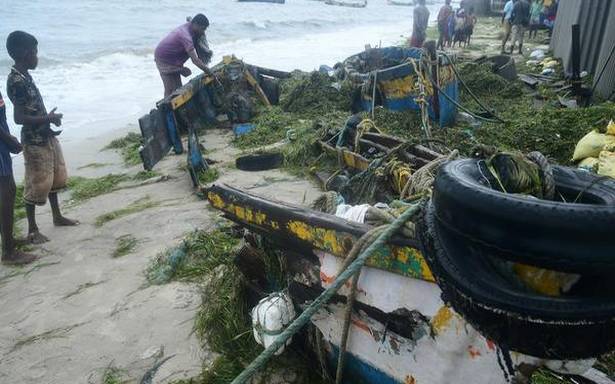