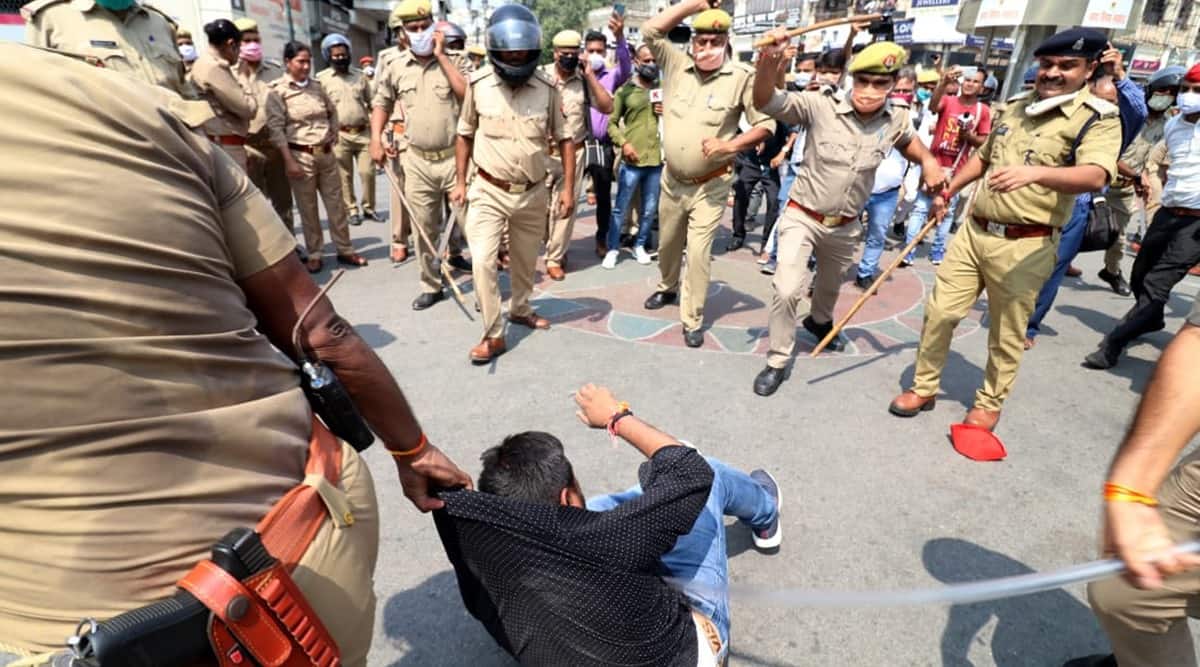 The centre of protests against the death and alleged gangrape of a Dalit woman in Hathras district, especially her hurried cremation, shifted from the Yamuna Expressway to Jantar Mantar on Friday, even as a beleaguered Uttar Pradesh government suspended  Hathras SP Vikrant Vir and four other officers.

Amid tight security at Jantar Mantar, Kejriwal said strictest punishment should be given to the perpetrators and the family of the 19-year-old victim should be allowed to meet whomever they want. Follow updates

“The family should be spared, let them meet whomever they want. Politics shouldn’t happen. Rape in any city or state is wrong, whether it be UP, Rajasthan or Delhi. Some people have raised doubts and it seems there is an attempt to shield the perpetrators, this should not happen,” Kejriwal said.

Senior lawyer Prashant Bhushan, actor Swara Bhasker, CPI(M) leader Brinda Karat, Kanhaiya Kumar and AAP leaders Saurabh Bharadwaj and Atishi were among those who gathered at the Jantar Mantar, demanding the justice for the Hathras victim. “Its not about statistics. It’s about how we treat crime against women. It’s not about my rape and your rape. Every rape is condemnable. Crystal clear that culpability is with the CM. UP CM must resign. When Nirbhaya happened, everyone demanded Sheila ji’s resignation,” said Congress leader Susmita Dev.

Amid mounting political pressure over the Hathras and Balrampur rape cases, Adityanath finally broke his silence, saying those who even think of harming self-respect of women would face total destruction.

“Total destruction of those who even think of harming the self-respect of women in UP is inevitable. They will get such a punishment that it will set an example. The UP government is committed to the safety and development of mothers and daughters,” Adityanath said in a tweet. However, the unease within the BJP was palpable, with senior leader Uma Bharti saying the “suspicious” action of UP police in the Hathras incident had “dented the image of the saffron, the state government and CM Adityanath”. She also requested the CM to allow mediapersons and politicians to meet the victim’s family.

With her tongue cut by the assaulters and her spinal cord and neck severely injured, leaving her paralysed in all four limbs, the 19-year-old passed away on Tuesday, triggering widespread national outrage. Reports of her hurried cremation without involving the victim’s family allegedly under police pressure has also led the Opposition to question the law and order situation in UP. Police, however, claimed they had the family’s consent for the cremation. Meanwhile, a day after being detained and sent back to Delhi while trying to reach Hathras to meet the family of the victim, Congress general secretary Priyanka Gandhi attended a prayer meeting in memory of the victim at a Valmiki Mandir in Delhi.

“Each and every woman of this country should raise her voice against what has happened to the woman in Hathras. We need to put pressure on the government to ensure justice for the young Dalit woman. Our country does not have a tradition where the father, brother and the family of the victim are not allowed to light the pyre,” Gandhi told the gathering. Her brother Rahul Gandhi, who accompanied Priyanka on Thursday and was seen falling during a scuffle with police personnel, accused the UP government of taking to brutality to hide the truth of the incident.

“The UP government has taken to brutality cover up the truth. Neither us, nor the media is being allowed to meet the victim’s family. Neither are they allowed to come out. On top of this, the family members of the victim are being beaten up and brutalised. No one in India will support such a behaviour,” he tweeted.

The war of words between the BJP and Opposition came even as dramatic scenes played out at the heavily barricaded Hathras district border. A delegation of Trinamool Congress MPs was stopped by the Uttar Pradesh police 1.5 kilometers away from the victim’s village. The TMC shared a number of short video clips which showed Derek O’Brien being pushed to ground by police personnel and Mandal being manhandled by the administrative official on the road. “We have filed a police complaint against the Hathras Sadar SDM with a request that it be turned into an FIR. We will also write to the Lok Sabha Speaker on the matter,” O’Brien said.