Speaking at Idea Exchange from his Jodhpur home, in an interaction with The Indian Express newsroom, Justice Mathur underlined the need for the judiciary to be free, fair, not vulnerable to pressure from the government and more representative of women and minorities. 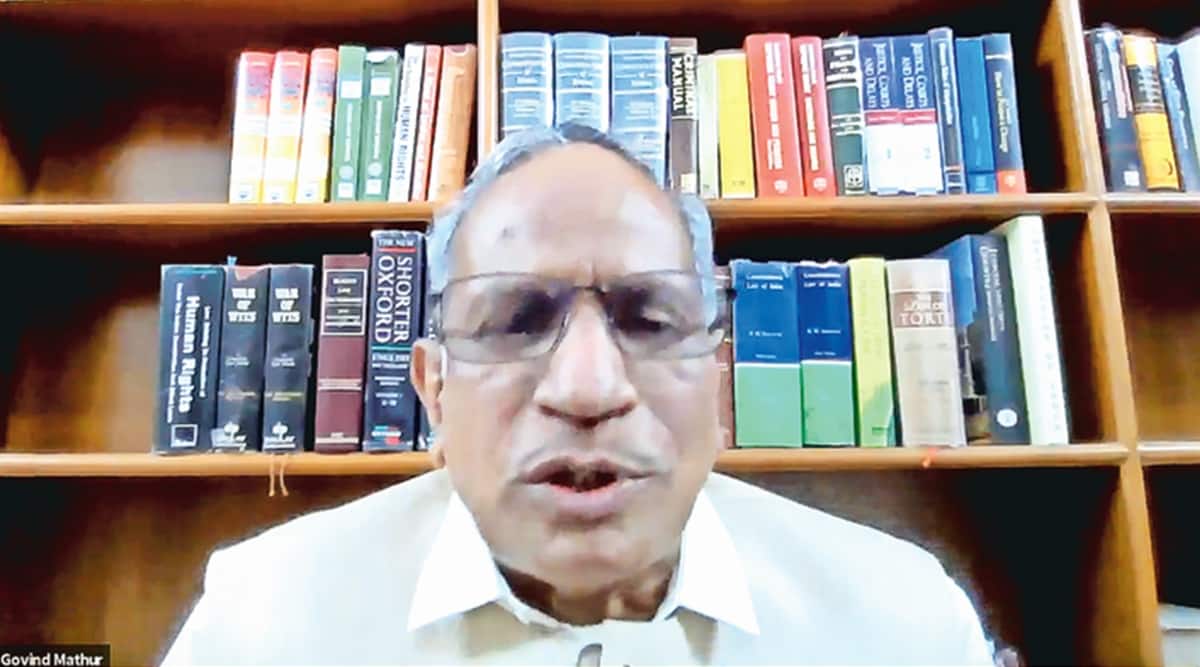 THE challenges facing the judiciary are reminiscent of the early 1970s in the face of a “majoritarian Executive”, but it was courts that pushed back then and it’s his belief that most judges today are independent and cannot be pressured, said Justice Govind Mathur, who retired as Chief Justice of the Allahabad High Court last month.

Speaking at Idea Exchange from his Jodhpur home, in an interaction with The Indian Express newsroom, Justice Mathur underlined the need for the judiciary to be free, fair, not vulnerable to pressure from the government and more representative of women and minorities.

When asked about the lack of Muslim judges on the bench, Justice Mathur minced few words: “As far as minorities are concerned, I have no hesitation in saying that a different kind of mentality works that a young person from a minority will not be appointed. It is not in the mind of judges but at government level.”

Justice Mathur’s remarks on the role of judiciary come when a string of High Courts, Bombay to Patna, Madras to Karnataka, Delhi and Himachal Pradesh are raising questions and prodding governments — state and Centre — on alleged mismanagement of Covid.

In his three-year tenure as Chief Justice of the Allahabad High Court, the country’s largest high court, Justice Mathur constantly questioned the Uttar Pradesh government making significant interventions from quashing the National Security Act charges in several cases and striking down the state’s “name and shame” posters during the anti-CAA protests in 2019.

“When you talk about the position of law and order in Uttar Pradesh…I do not want to give any titles like jungle raj etc but it is not less than that,” said Justice Mathur. “You can say that in the last few years the state has taken several actions or sometimes supported the mob that is attacking civil liberties of a person.”

He criticised the state’s invocation of NSA and sedition. “If I am raising slogans or protesting against some legislation, it does not mean that I am waging a war against the state…It is very easy to call a person anti-national or as someone working against the interests of the state but it is not so. I believe 99.9% citizens of this country are committed to the nation. They are patriots,” he said.

On independence of the judiciary, Justice Mathur suggested he was hopeful. “If you see the history of Indian judiciary in early 1970s, at that time also, a majoritarian Executive was there. Today also, it is the same position. At that time, the election of Mrs Indira Gandhi was set aside by the Allahabad High Court,” he said.

Declining to comment on former Chief Justice of India Ranjan Gogoi’s nomination to the Rajya Sabha, Justice Mathur made his views clear: “If I want to go to the Parliament, I will contest an election and go. But I would not accept (the nomination) if I was offered,” he said. Adding that his pension, his health insurance courtesy the terms of his retirement, are “enough,” for him and his wife.

Asked about the anti-conversion (“love jihad”) laws enacted in several BJP-ruled states, following the Uttar Pradesh template, Justice Mathur said that the very use if the word, “conversion,” was suspect.

“I fail to understand this term ‘conversion’…I am Govind Mathur, people call me a Hindu for the reason that my father is a Hindu. Nobody asked me…who are you? A Hindu, Muslim, Christian, Sikh or a person without a religion. They are treating me a Hindu without my will, imposing their will. Now if I adopt something, they say it is conversion. If I am choosing something for the first time, how is it conversion?” he said.