A series of high frequency indicators has pointed to a growing momentum in the Indian economy. How far this has helped the economy make up for the sharp fall from pre-pandemic levels will become clear only when the second quarter (July-September) GDP figures are released later this month. When disruptions as massive as the current one hit an economy as complex as India’s, growth rates are not the only thing affected. An equally important parameter to track is income distribution, which has its own effect on the economy’s growth trajectory. While the Indian economy does not offer much in terms of high-frequency data to analyse such changes, it is increasingly becoming clear the current economic recovery might not be based on a very broad base. Here’s why:

1 Households in India saved more during the lockdown

Last week, the Reserve Bank of India released provisional estimates of household savings for the first quarter (April-June) of the current fiscal year. As a share of GDP, household savings were 20.1% in the quarter ending June 30. This number was 10% in March and 7.8% in June 2019. In absolute terms, household savings increased from Rs 3.84 lakh crore in the quarter ending June 2019 to Rs 8.15 lakh crore in June this year. The increase in this savings-GDP ratio is higher than the increase in absolute savings. This is because the denominator (GDP) itself suffered a huge fall – it contracted by 24% on an annual basis – in the June 2020 quarter. Also Read| Covid-19: What you need to know today

2 Did India see a paradox of thrift in the first quarter?

The term paradox of thrift owes its popularity to John Maynard Keynes who argued that if people try to save more during a recession, it will eventually end up hurting the economy rather than helping it. This is because an increase in (precautionary) savings leads to a fall in consumption and therefore aggregate demand or income. The economic logic of this is not very difficult to understand. If the additional savings of Rs 100 substituted the money spent on eating out, then the people working in the restaurant lose out on incomes. This leads to the restaurant workers cutting down on their purchases, say new clothes for their children. This triggers a vicious cycle of sorts. The Covid-19 pandemic has added another layer to this — forced savings. This is because social distancing requirements stopped a lot of people from undertaking spending such as eating out, travelling or taking vacations, even if they wanted to. The fall in PFCE more than compensated for the increase in household savings in the quarter ending June 30. While things would have improved after the June quarter — much of April and May was in an almost complete lockdown — the magnitude of this improvement will only be known once we have more data. Retail inflation, especially the food component of it, has been very high in the past one year. Food inflation has been growing in double digits in the months of September and October. The fact that this comes on an already high base — food inflation grew at 5.1% and 7.9% in September and October last year — means that absolute prices are really high. Food items have a weight of 39% (47% in rural areas and 30% in urban areas) in the average CPI (consumer price index) basket. As is to be expected, food items have a much bigger weight in consumption spending of poor households. According to the 2011-12 Consumption Expenditure Survey of the National Sample Survey Office — these are the latest available figures — the bottom 50% of household spent more than half their consumption expenditure on food. At a time when pandemic-related headwinds to income and employment continue to persist, the sharp rise in food prices must have created a big squeeze on non-food spending by poor households. 4 Stocks rally driven by an ‘investment of last resort’?

India’s benchmark equity index, the BSE Sensex reached an all-time high on November 18. That this has happened is not surprising. The stock market has shown what is referred to as a V-shaped recovery after falling temporarily in the initial phase of the lockdown. This is despite the fact that most institutional forecasts have predicted a double-digit contraction for the Indian economy in the current financial year. What explains this? A look at one of the most basic indicators of stock market performance, the price to earnings or PE multiple, suggests that the current stock market rally is not backed by objective performance. The PE multiple measures price of a share to earnings per share. This multiple has increased rapidly after the lockdown, underlining the speculative nature of the current boom. This, when read with the fact that the rest of the economy does not have many investment opportunities to offer could also mean that it has been acting as “an investment of last resort” of sorts for people with a glut of savings. An economy where the relatively poor have lost incomes and jobs, are having to spend more on buying food, and where the rich are facing a savings glut because they cannot spend even if they want to and are perhaps therefore investing in stocks presents a mixed picture. 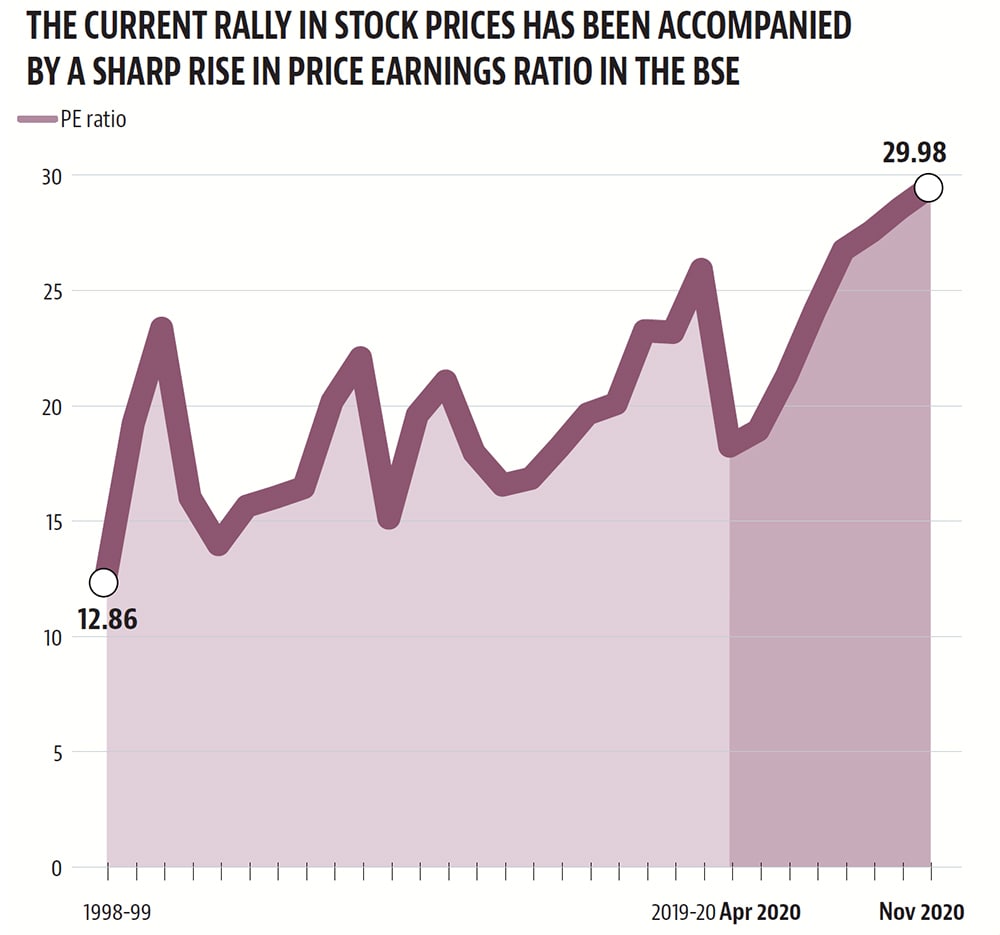